ROCHESTER -- Watching a drone glide through the skies is still not an everyday occurrence, but seeing one flying through a church is even more rare.

On March 11, Chris Dominicos guided a drone down the center aisle of St. Michael Church, a worship site of St. Frances Xavier Cabrini Parish. Equipped with a camera, the drone captured video and photographs of the church's ornate stained-glass windows. The windows were designed in the late 1800s and are worth millions of dollars, according to Father Mickey McGrath, the parish's copastor.

A four-story hydraulic lift operated by Mike McBride was being used to supplement the drone's photographs of the windows' details, which have not been seen close up since the church was built in 1890, McBride and Father McGrath said.

"We’d like to get them (the images) on the Web with some sort of montage video for people to be able to look at and appreciate," said Father McGrath, adding that the church will explore using such modern technology as a drone for evangelization and promoting the church.

"Its artistry and history are all part of what we have to offer as … a historic church," he said.

McBride, who is heading up the project at no cost to the parish, has been working with Dominicos on ways of adapting drone technology for such industries as real estate, construction and even wedding photography. Dominicos, who offers drone flight training classes at Monroe Community College and Mohawk Valley Community College in Utica, operates his small fleet of drones under the name Unmanned Air Operators.

Last year, McBride and Dominicos used a drone to photograph the exterior and interior of St. Stanislaus Kostka Church on Hudson Avenue in Rochester, McBride said.

For last summer's parish festival, the pair allowed the parish to sell aerial shots they had taken of the building, noted Kathy Urbanic, St. Stanislaus' historian.

"All the profits went to the church," she said. "They were very generous to us."

McBride and Dominicos then asked if the parish would allow them to fly the drone inside the church building to capture video and photos of statues and windows that are not easily visible from ground level, Urbanic added. 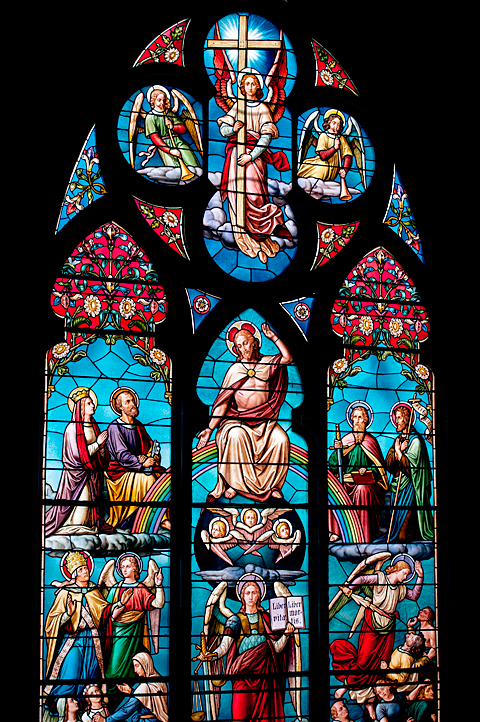 "We all got really excited and thought about doing an interior drone visual tour," she said. "They came and did a test video, and floated the drone around. It is really impressive to see the church this way."

McBride subsequently spoke with Father McGrath and showed him the photos from St. Stanislaus as well as wide aerial shots he had taken of St. Michael's exterior. Father McGrath said he asked McBride if the drone could confirm the exact sources of leaks the parish's maintenance workers had discovered in the roof over the choir loft.

"He came back (last summer) and got some good shots," Father McGrath said, noting that the church subsequently hired contractors to repair the leaks.

After McBride received a tour of the church last fall, he proposed using the drone to get interior photos to put on the parish website or on social media.

"The tour guides said if you look up, you can see such and such (on the windows)," McBride recalled. "And I thought, 'I'm going to get a stiff neck.' The (window details) were too small."

He said he feels honored to provide a closer view of those details.

"There are all these tiny people; saints and angels lost up there since 1890," McBride said referring to the images depicted in the windows. "Those windows are the best-kept secret in Rochester. It's like buried treasure. All this beautiful artwork no one can see."

He and Dominicos spent March 7-11 taking hundreds of photos in the 53-foot-high church, McBride said. They had to be flexible in scheduling their work because the quality of the photos depended on the lighting each day brought, he added.

"This is an adventure," McBride said. "But this church is like something out of Europe. It's so beautiful."

The windows at St. Michael and St. Stanislaus came from three studios in Innsbruck, Austria, and Munich, Germany, that continue in operation today, Urbanic said. The immigrant communities who built such local churches were striving to preserve the architecture of their homelands, especially as regards the window designs, she noted.

"Even the colors were different," Urbanic noted. "The European windows were very vivid. And the American (windows) were more muted. They (European immigrants) wanted the stained glass that was more vivid."