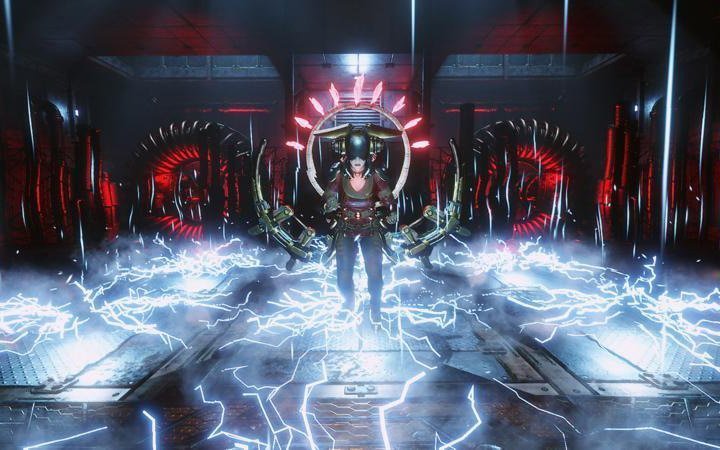 This is a scene in the video game "Vaporum." (CNS photo by Merge Games)

NEW YORK (CNS) — Gamers seeking the thrill of a challenge are sure to find it in “Vaporum” (Merge Games). This first-person steampunk dungeon crawler, as its developer, Fatbot Games, describes it, abounds in intriguingly mysterious elements.

Players control an unnamed man (voice of Sebastian Ruiz Hernandez) with no memory of his past and no knowledge of where he is. His goal is to navigate to the top of the Arx Vaporum, a tower where something unspecified went unspeakably wrong.

The primary features of “Vaporum” are its grid system and real-time combat. Essentially, this is a chess game combined with a unique, though vague, story line and strong pacing. The result is a rewarding experience.

Various enemies fill the tower, many of them mechanical, with no supernatural or occult origin. Rather, they are the result of engineering experiments and have long been abandoned to their own devices.

Only one piece on the chess board can be attacked at a time, but they can all attack together. Players need to be on the alert to avoid being surrounded. The violence is generally nongraphic; since most of the enemies are robotic, they simply fall apart upon being defeated.

An interesting feature of the game is its time-stop mechanic. Players can pause the game and it will remain on hold as long as they are stationary. This is helpful in planning out battle strategies or in gaining some extra time during a puzzle.

Visually, the dark industrial setting of the Arx Vaporum is well done and enticing to fans of the classic dungeon crawlers of the 1980s and ’90s. The steampunk concepts are especially evocative of the popular “Bioshock” series from 2K Games — as is the depiction of past events via notes and audio logs.

The downsides of “Vaporum” are few but irksome. There is little to no music within the game, which can either contribute to the suspenseful atmosphere or make the lengthy stretches of puzzle-solving seem to drag on even longer.

The grid system can be difficult to navigate elegantly, especially when moving on a timer. And some of the puzzles are more challenging than they should be, which will likely prove frustrating for less experienced gamers or players looking for a casual pastime. Still, “Vaporum” is a terrific choice overall for those seeking a mental workout.

At its core, this is a puzzle-solving game. The thin plot has little moral significance for good or ill. So parents and adult players need only concern themselves with the elements listed below.

Playable on PlayStation 4, Xbox One, Nintendo Switch, and PC (Steam).