During Advent, Catholics prepare for ‘the ultimate Christmas' - Catholic Courier 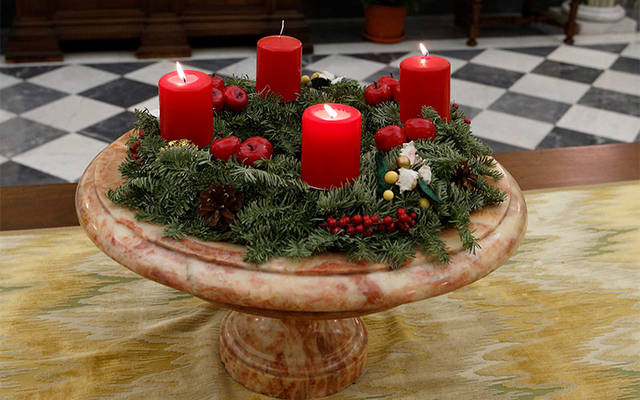 The beginning of Advent signals that Christmas is on the way. Yet for Catholics, Christ’s birth represents only a portion of the season’s significance.

Catholics’ Advent preparation also incorporates an encounter with Jesus that has yet to occur: meeting him in paradise, which is what Father Thomas Mull calls “the bigger picture” of Advent.

“In the eyes of the church, Advent is preparing for the ultimate Christmas — our birth into eternal life,” said Father Mull, who serves as pastor of Geneva’s Our Lady of Peace Parish.

He noted that this focus is emphasized in the readings for the first Sunday of Advent, Dec. 2. In that day’s Gospel reading (Luke 21:25-28, 34-36), for example, Jesus urges his disciples to prepare themselves spiritually for his return to earth at the end of time.

Such preparation also is emphasized in the Gospel passages for Dec. 9 (Luke 3:1-6) and Dec. 16 (Luke 3:10-18). Yet again, the theme is not Christ’s birth; rather, John the Baptist implores people to atone for their sins in advance of Jesus’ public ministry that is soon to begin. Not until the week before Christmas do the Sunday and weekday Gospel readings describe events occurring near, or at, the time of Christ’s birth.

Father Mull observed that a tone of urgency imbues the first three weeks of readings of the Advent season, reflecting a belief by early Christians that the resurrected Christ would be returning to earth very soon.

However, Father Mull emphasized, we shouldn’t take lightly the need to prepare for Jesus’ return simply because so much time has passed. Accordingly, the Advent season is a time of intense self-reflection and penitence — of “clearing our minds, clearing our souls,” he said.

“The season of Advent invites us to be quiet, which is almost in contrast with what the rest of the world tells us to do,” Father Mull added, referring to the parties, gift-buying and other frantic activities that typically occur in the weeks leading up to Christmas. To better appreciate what Advent is truly meant to represent, he suggested that people find opportunities to “just step back and take a quiet moment to reflect on the beauty of the season, and why it’s beautiful.”

Quiet reflection is among several themes highlighted during the Advent season; others are hope, joy and love. The focus on joy is particularly noted each third Sunday of Advent, also known as Gaudete Sunday, which marks the midpoint of Advent.

Looking ahead to this Dec. 16, the first and second readings (Zephania 3:14-18A and Philippians 4:4-7, respectively) as well as the responsorial psalm (Isaiah 2-3, 4, 5-6) all emphasize joy and rejoicing. Gaudete Sunday also is set apart by the priests’ rose-colored vestments and the lighting of the lone rose-colored candle amid the purple candles on Advent wreaths.

And the lighting each week of one additional candle on the Advent wreath — a traditional practice in both churches and homes — symbolizes a progression that marks our emergence from darkness as we draw closer to the coming of Christ, both into the world at Christmas and on Judgment Day.

“The light is very much part of the character of the Advent season,” Father Mull said. “The expectation tends to get stronger as there’s more light.”