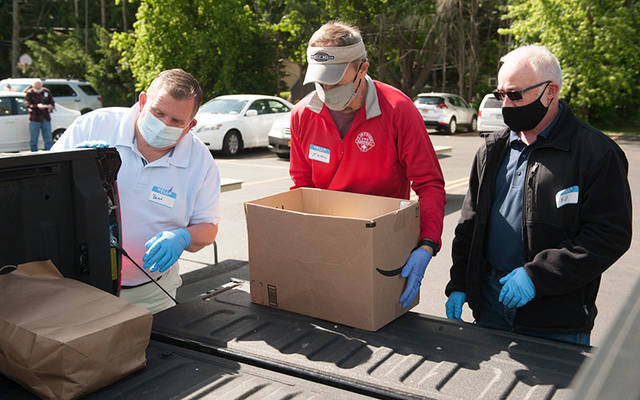 “Essential worker” has become a common expression during the coronavirus pandemic, describing employees whose work is deemed vital enough to continue amid public shutdowns.

Yet “essential volunteer” might be considered an apt phrase as well, based on the many folks across the Diocese of Rochester who, in recent months, have lent hands-on assistance for vital ministries. Examples of this volunteerism range from helping livestream and record Masses at parishes, to cleaning churches as congregations gradually return, to joining in parish and community outreach efforts.

In Tioga County, for instance, approximately 25 volunteers teamed up for a chicken-barbecue fundraiser June 7 at St. John the Evangelist Church in Newark Valley. Jerry Mertson, longtime coordinator of the annual event, said the strong support helped all 175 dinners to be sold quickly, raising more than $900 for the church.

“Just about everybody wanted to do it. The response was immediate and strong,” Mertson said. “We take a lot of pride in our chicken barbecue.” He noted that several safety measures were taken: volunteers brought meals to customers so they didn’t have to leave their vehicles, while all workers adhered to such safety measures as social distancing, wearing masks and gloves, and keeping surfaces clean.

Mertson acknowledged the willingness of volunteers to come forward even while New York state’s government was asking people to remain home when possible so as to slow the spread of COVID-19.

“Our church is very strong in our volunteerism,” he said.

Volunteers also have been vital to the resumption of free community meals at St. John the Evangelist, held every third Wednesday from 5 to 6 p.m.; as well as at St. James Church in Waverly, where a similar meal is offered every third Thursday from 4:30 to 5:30 p.m. Lisa Salamida, administrative assistant for Blessed Trinity/St. Patrick parishes — of which St. John the Evangelist and St. James are a part — said the meals were cancelled in March and April due to the COVID-19 crisis, but started up again in May. She noted that the events normally take place in the parish halls but, for now, are being offered on a take-out basis with volunteers handing meals to patrons while they remain in their vehicles.

Another drive-through event with strong volunteer support took place June 13 in Monroe County, in the form of a food and supply drive for migrant families. More than 50 volunteers helped collect some 600 bags of food and supplies from 150-plus vehicles during the one-day effort, held at the diocesan Pastoral Center in Gates and St. John of Rochester Church in Fairport.

“It really was a widespread response,” said event coordinator Carmen Rollinson, project manager for the diocesan Department of Pastoral Services, referring to both the volunteers and donors. “What a heart — it’s all about the heart, really. What a blessing.”

Rollinson added that all volunteers on June 13 wore masks and gloves and practiced social distancing. Similar standards are being requested for volunteers at an upcoming Catholic Family Center and Feed the Children drive-through food distribution, scheduled for July 29.

Ensuring safety is a strong focus at diocesan parishes as well, many of which have sounded the call for cleaning volunteers in recent weeks to assist with the resumption of public Masses. For instance, at St. Benedict Parish in the Finger Lakes, a notice on the parish website is requesting a minimum of 12 volunteers at St. Mary Church in Canandaigua and at least six people at St. Bridget Church in East Bloomfield to help clean after Masses. Duties include wiping down pews, door handles and bathrooms.

One more area of volunteerism in response to the pandemic has been the addition of livestreamed and prerecorded Sunday and weekday Masses at several parishes where no such efforts previously existed. In fact, even with churches once again open to the public, an initiative at St. Charles Borromeo Parish in Greece has been so well-received that a volunteer media ministry team is being formed so Masses can continue being recorded and offered online for folks unable to attend in person.