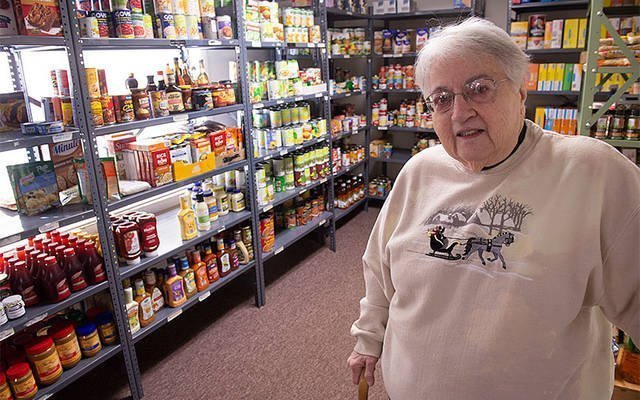 EAST ROCHESTER — Based on her 45-year commitment to the East Rochester Community Resource Center — including the past three decades as president and director — 87-year-old Teresa Quinzi-Willette has more than earned the right to retire.

However, driven by a relentless desire to help people in need, the lifelong East Rochesterian carries out her part-time role with the energy of somebody half her age.

“Sometimes it’s hard to go home and go to bed at night when you know there’s somebody out there who doesn’t have food, who doesn’t have a place to put their head down,” Quinzi-Willette said. “I lie awake at night thinking about it.”

Shelves and racks at the center contain an array of groceries, household products, school supplies, clothing, coats, footwear, linens and blankets. In addition, the center offers furniture and household items that have been donated; emergency funds for rent, utilities, medical expenses and transportation; drivers who help people run errands and get to appointments; budget counseling and advocacy; and membership in youth sports programs.

“We do a lot here,” Quinzi-Willette said, noting that in October 2019, 82 people were assisted, including 33 children. She said that the number of recipients remains fairly consistent from month to month, adding that many families also benefit at holiday time from Thanksgiving and Christmas food baskets as well as gifts for kids.

Clients, nearly all of whom are East Rochester residents, meet initially with Quinzi-Willette to have their needs assessed. Many, she said, are young adults who are unemployed or working poor. She noted, for example, that the resource center recently helped a young man who couldn’t afford to have his car fixed and subsequently lost his job because his workplace was not on a bus line; another client endured a house fire. Other people seeking out the center grapple with such challenges as illness and substance abuse.

Quinzi-Willette emphasized that the center functions as an emergency-services facility, saying she encourages clients toward self-sufficiency whenever possible. Yet when long-term financial assistance is required, the center also provides referrals and applications to other agencies.

East Rochester Community Resource Center has operated at its current location since 1993. It originated as a food cupboard begun in 1973 by St. Jerome Parish, where Quinzi-Willette has been a parishioner her entire life. The center’s largest source of funding is the Village of East Rochester; it receives additional assistance from St. Jerome and other area churches, organizations and individuals. Quinzi-Willette said people are always eager to help. Noticing that a few shelves at the resource center were getting low on food, she remarked, “I’ll put the word out on Facebook, and it’ll start coming in fast.”

Quinzi-Willette and her assistant, Al Buckner, are the center’s only paid employees. She noted that many volunteers bolster its efforts, serving as drivers for clients and also helping to gather, sort and deliver donated items.

“It keeps growing,” she said of the community assistance. “Different people are supporting in different ways.”

Quinzi-Willette was one of those volunteers way back when, lending her time to the center for 15 years before becoming its director in 1989. She explained her longtime devotion by saying she endured lean financial times early in her marriage, and she’s never forgotten how it felt.

“Well, you know, I went through it once. We didn’t have it too easy,” she remarked.

These days, she assists folks with similar challenges: “They’re just very grateful.” She added that she occasionally runs across past clients who say they’ve gotten back on their feet, thanks in some measure to the resource center’s help.

“We’ve got some success cases out there,” she said.