Easter begins in a night of light and hope - Catholic Courier 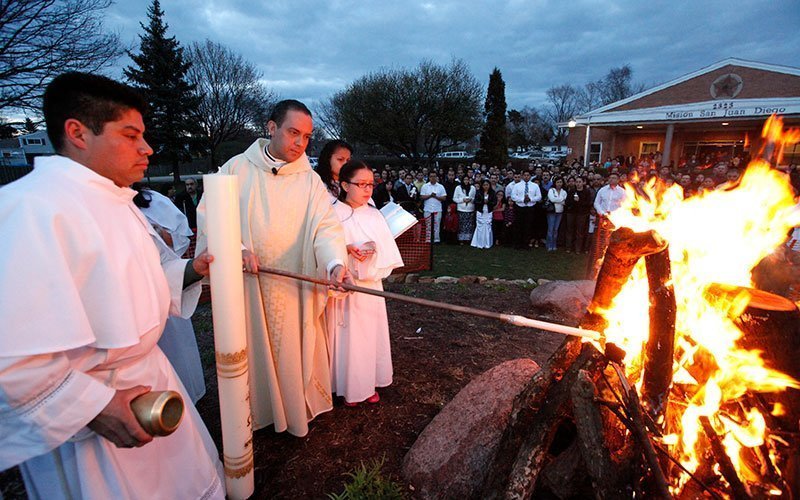 A priest lights a fire outside outside Mission St. Juan Diego in Arlington Heights, Ill., during the Easter Vigil. Each Christian present is seen to be a bearer of the light of Christ. (CNS photo by Karen Callaway, Catholic New World)

“This is the night,” the church sings out again and again in a poetic hymn dating far back in Christian history called the Exsultet. It is heard each year in Catholic churches during the Easter Vigil marking the commencement of celebrations of the great feast of the Resurrection.

“This is the night, when Christ broke the prison bars of death and rose victorious from the underworld,” the Exsultet declares. Affirming this as a “truly blessed night,” the hymn basks delightedly in Easter’s bright rays of light and hope, crying out:

“This is the night of which it is written: The night shall be as bright as day, dazzling is the night for me and full of gladness.”

Typically, the Easter Vigil begins in my corner of the world on Easter’s eve around 8 p.m. or a bit later, after darkness descends. But this will be no celebration of darkness!

“Let all corners of the earth be glad, knowing an end to gloom and darkness.” That is the Exsultet’s exhortation.

So darkness is not the true focus of the Easter Vigil’s first part. The focal point is light, which means that the risen Christ is the focal point. For fire, candlelight, sunlight and even the brightening dawn of each new day all have symbolized Christ in Christian history.

The Easter Vigil commonly begins outdoors, where a blazing fire is built and a church’s new paschal candle awaits the community’s members, all carrying small candles — tapers. Ultimately, the paschal candle, itself a symbol of Christ, will share its flame with all those present, passed along first to a few handheld tapers and then, from them, to the rest of the participants.

The symbolism is clear. Each Christian present now is seen to be a bearer of the light of Christ. As all walk together into a somewhat darkened church, their candlelight is meant to illuminate the worship space.

The early part of the Easter Vigil is characterized by a focus on light, but also by the participants’ procession from darkness into light, their movement from the dark setting where a fire of Christ is lighted into the church’s interior, ready to glow with new light.

The light of Easter is not reserved to them alone, however. If Christ’s light is a blessing, like every blessing its reverse side commissions all who receive it to convey it to others. It can be challenging to bring light to others whose lives are darkened by illness, sadness or other hard-to-overcome difficulties, but Christians are called to make the attempt.

Hopelessness is one difficult-to-overcome form of darkness that calls out for light. Pope Francis spoke of this during the 2019 Easter Vigil in St. Peter’s Basilica. Crushed hopes hardly are unusual. But the pope sought to guard against any temptation “to think that dashed hope is the bleak law of life.”

What blocks hope is discouragement, resignation or, for example, a sense of desolation, Pope Francis suggested. People may “lose heart and come to believe that death is stronger than life,” and “a kind of tomb psychology takes over.”

The pope asked, “How many times, once we have encountered the Lord, do we return to the dead, digging up regrets, reproaches, hurts and dissatisfactions, without letting the risen One change us?”

However, “in each of us (God) never ceases to see an irrepressible kernel of beauty,” the pope emphasized. He called Jesus “a specialist at turning our deaths into life.”

The Easter Vigil’s message is all about overcoming darkness with light. But Easter hope is not naive. It does not deny the trouble big problems can cause. Yet, hope “means acknowledging that evil, suffering and death will not have the last word,” Pope Francis has said.

The Easter Vigil’s first part, typically called the service of light, brings the paschal candle front and center to signify that Jesus Christ is true light for the world. The Exsultet sings of the paschal candle, praying that it “may persevere undimmed to overcome the darkness of this night.”

The Exsultet reflects such faith wonderfully when in a concluding petition it identifies the morning star with Christ. Today, of course, the morning star usually is identified with the light of the planet Venus rising in the east in early morning to announce compellingly that a new day is on the horizon.

That is what Easter meant to early Christians, the arrival of an entirely new day, the arrival, in fact, of a new creation.

The Exsultet’s remarkable prayer is that the paschal candle will be found “still burning by the Morning Star, the one Morning Star who never sets, Christ your Son, who coming back from death’s domain has shed his peaceful light on humanity.”