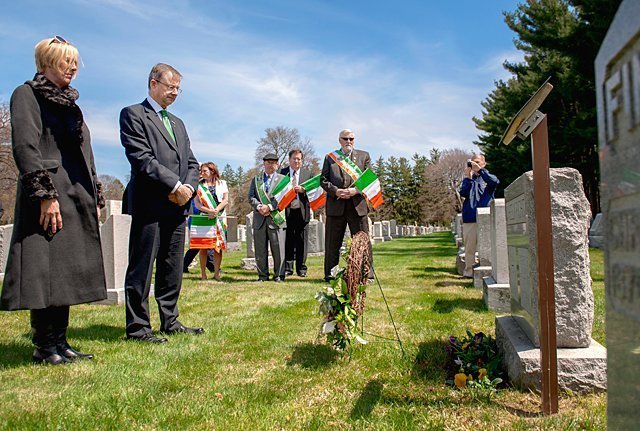 Éamon Ó Cuív and his wife, Áine, stand at the grave of his great-grandmother, Catherine Wheelwright, who is buried in Rochester’s Holy Sepulchre Cemetery. The couple attended a ceremony at Wheelwright’s grave April 24.

ROCHESTER — Members of Rochester’s Irish-American community recently gathered at Holy Sepulchre Cemetery to commemorate local ties to the creation of the Republic of Ireland.

On April 24, 1916, a group of Irish insurrectionists began what was known as the Easter Rising, which was launched to bring about the end of British rule in Ireland.

A prominent figure during the insurrection was Éamon de Valera. Born in New York City and sent to Ireland at the age of 2 to live with his grandmother, de Valera, along with 16 insurgents, were sentenced to death.

De Valera’s sentence was not carried out, however, thanks to the efforts of his mother, Catherine (Coll) Wheelwright. At the time, Wheelwright was living in Rochester with her second husband, Charles Wheelwright. She made an emergency trip from Rochester to New York City to produce de Valera’s birth certificate, hoping that proof of his American citizenship would spare his life.

Indeed, the British authorities did not want to execute a U.S. citizen, so they reversed de Valera’s death sentence and instead sentenced him to life in prison.

Wheelwright’s connection to the rebellion was the reason why a large crowd from Rochester’s Irish-American community gathered for the April 24 commemoration ceremony, which was held at her grave in Holy Sepulchre Cemetery.

Organizers noted that in the early stages of planning the commemoration they were not aware of Wheelwright’s connection to the Easter Rising. 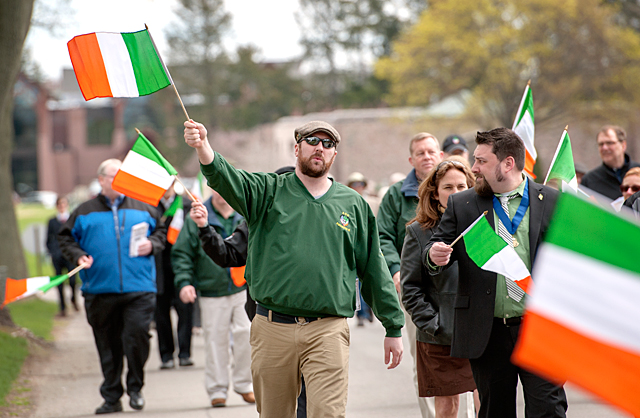 "We had planned to celebrate the 100th anniversary of the Easter Rising as it was, but it wasn’t until we started planning the event that we learned about Wheelwright’s history and that she was buried at Holy Sepulchre Cemetery," said Tom O’Connell, chairman the Col. O’Rorke Memorial Society, a local Irish history organization. "The event then became much more significant to us after learning about our local connection."

The commemoration began with Mass celebrated by Bishop Emeritus Matthew H. Clark at the cemetery’s Christ the Light Mausoleum. Following Mass, members of the Greece American Legion and the Gates Keystone Club Police Pipes and Drums led the crowd in a procession to Wheelwright’s grave on the opposite side of the cemetery. There, a ceremony honored the people and the events leading to Irish freedom and the creation of the Republic of Ireland.

Éamon Ó Cuív, a member of Ireland’s parliament, attended the ceremony at the invitation of St. John Fisher College students who were studying in his country.

"It’s great to meet so many relatives that I didn’t know about," he jokingly told the crowd. "While Americans constantly journey to Ireland to find their roots, I have to come to America to find mine."

During the ceremony, Ó Cuív told those in attendance that it was hard to image what April 24, 1916, was like.

"The leaders of the rising knew they couldn’t succeed militarily," he said. "But they believed that if they made a stand, that they would change public opinion, give hope to their own people and that independence would be achieved."

Rick Dollinger, a New York Court of Claims judge and member of the O’Rorke Memorial Society, called de Valera "one of Ireland’s heroes" as he shared with the crowd the significance of Rochester’s history in the independence of Ireland.

Pat Carey, whose mother attended Blessed Sacrament Parish with Wheelwright, gave a brief summary of Wheelwright’s life in Rochester. Carey said she grew up hearing stories from her mother about an "old Irish woman who would often have a smile, but would dress in black."

The ceremony also included the reading of Wheelwright’s words to Congress that she spoke on her son’s behalf in 1916, as well as W.B. Yeats’ poem, Easter 1916.

Ben Mac An Tuile read the Irish Proclamation of Independence during the ceremony. Fifty years ago, Mac An Tuile had read that same proclamation in front of the General Post Office in Dublin when he was just 16 years old.

"It is a huge importance," Mac An Tuile, a native of Dublin, said about the significance of the Easter Rising’s 100th anniversary. "One hundred years later, Ireland prospered and became a nation unto its own."

Mac An Tuile, who attended the ceremony with his wife, Maeve, said he wasn’t surprised to see so many people in attendance.

"The Irish are a very tight-knit community. We never lose our roots," he remarked.

At the end of the ceremony, Ó Cuív and his wife, Áine, laid a wreath on Wheelwright’s grave.

"To have a celebration here at the grave site of my great-grandmother was something very special," he said following the ceremony. "This is a huge honor for me to have people remember Catherine Wheelwright."