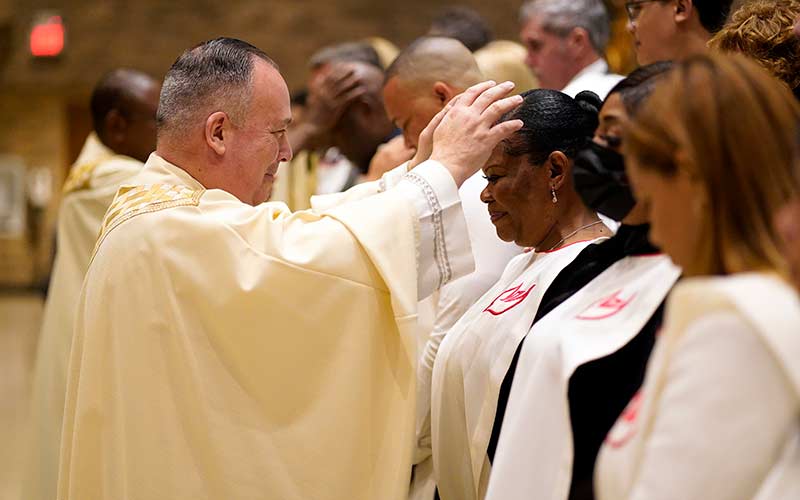 Father Sean Gann, pastor of St. Patrick Church in Bay Shore, N.Y., prays over candidate Paulette Poux while administering the sacrament of confirmation April 16, 2022, during the parish's Easter Vigil. Poux was one of 10 adults fully initiated and welcomed into the Catholic faith at the Mass. (CNS photo by Gregory A. Shemitz)

RCIA leads many in Rochester Diocese on path to Catholicism

DETROIT (CNS) — The resurrection of Jesus gives hope to all — especially those newly baptized into the faith — that sacrifices and crosses will be worth it, said Detroit Archbishop Allen H. Vigneron during an Easter Vigil Mass at the Cathedral of the Most Blessed Sacrament April 16.

The Mass in Detroit, like Easter Vigil Masses around the country, began with a lit fire outside of church and a blessing and lighting of the Easter candle followed by a procession into a darkened church and the flame from the Easter candle spreading from person to person.

In Detroit, the archbishop baptized three catechumens and welcomed 13 candidates into full communion with the church, as their sponsors and loved ones applauded.

Later, the entire congregation renewed their own baptismal promises.

In his homily, the archbishop said Jesus’ claim to be the son of God — derided and mocked by the soldiers and chief priests — was vindicated on Easter Sunday, something which he said allows Christians today to confidently identify as Jesus’ followers.

Even Peter laid down his life in the end, the archbishop added, because he became convinced of the great meaning of Jesus’ rising from the dead.

“Sociologists tell us there is a great crisis of meaning in the world today,” the archbishop said, noting that it’s “one of the chief causes of so many suicides and this low-grade fever of anger and frustration at so many dead ends that beset us.”

When Christians stand up and say, “Yes, I am a disciple of the crucified one who is risen,” they give witness to this meaning and share hope with the world, he added.

“It cost Jesus a great deal to purchase for us the hope that sustains us. He willingly paid that cost in order to purchase for us a possibility of eternal life, to establish an eternal hope, an invincible hope, an unshakable hope,” the archbishop said.

In Washington, during the Easter Vigil at the Cathedral of St. Matthew the Apostle, Washington Cardinal Wilton D. Gregory baptized 11 people and told the congregation April 16 that the light of the risen Christ dispels darkness in the world and in people’s lives, offering new life and hope.

In challenging times, when people might be facing fear, doubt and confusion, the risen Lord comes with “light that conquers all,” the cardinal said.

“Each year, the Catholic Church welcomes its new members on this most sacred night,” he said. “We come together in the darkness that holds no terror for us. We have the light of Christ before us. We are not people who need to be afraid. “

At the Easter Vigil at the Co-Cathedral of St. Joseph in Brooklyn, New York, Christie St. Juste said it was a dream come true to be baptized into the Catholic faith.

“I feel like I am part of something much bigger than myself and I feel united with everyone here,” she told The Tablet, Brooklyn’s diocesan newspaper.

St. Juste, who was born in Haiti and raised as a Seventh-day Adventist, was happy with her spiritual life but wanted to make a change. “I wanted to be even closer to God,” she explained.

Still, she was unsure about becoming a Catholic until she did a great deal of research into the faith. “I looked at the facts and the history. This is a beautiful, welcoming church,” she said.

Jhan Checo, 13, decided he wanted to join the faith after reading the Bible at age 10. He focused his attention on the Gospels, finding them compelling reading and experiencing a revelation — even at his young age. “The Lord is the way forward in my life,” he said.

Prior to the Mass, he confessed to being “a little nervous,” but said he was looking forward to his baptism and confirmation.

Brooklyn Bishop Robert J. Brennan praised the newcomers for their decision to join the Catholic faith. “You remind us what it’s all about,” he told them.

The bishop walked through the co-cathedral sprinkling water on the congregation –using the same water from the baptismal font where the five new Catholics had been baptized minutes earlier.

The night also provided an opportunity for those who were born Catholic to strengthen their commitment to their faith.

In the Archdiocese of Baltimore, some newly welcomed Catholics at the Easter Vigil proved that you’re never too old to join the church.

Kenneth Davis, a 90-year-old lifelong Protestant, took instructions in the Catholic faith and received his first Communion earlier this year at the chapel in Oak Crest Catholic Community in Parkville, Maryland.

During the April 16 Easter Vigil, he made his confirmation in the same chapel.

Davis was among nearly 500 people who came into full communion with the Catholic Church in the Archdiocese of Baltimore this Easter season. Some, like him, had waited nearly a century before taking the big step.

June Vantz, 93, will be received into the Catholic Church May 8 at St. Ann in Hagerstown, Maryland, where she will receive the sacraments of the Eucharist and confirmation. Like Davis, she was motivated to join the Catholic faith by a fellow resident at her senior living facility in Hagerstown.

Davis said that throughout his life, he witnessed and admired the devotion of his Catholic friends and recently many aspects of the Catholic Church made more sense to him such as Marian devotion, pro-life advocacy, obedience to the pope and the absolution of sins through the sacrament of reconciliation.

Msgr. J. Bruce Jarboe, pastor of St. Ann in Hagerstown, said opportunities for evangelization can happen anywhere by anyone as shown by outreach at his parish.

“It is never too late to grow and develop closer to the Lord and to the church in living a spiritual life,” he said.

Contributing to this report was Paula Katinas in Brooklyn, Mark Zimmermann in Washington and Priscila González de Doran in Baltimore.