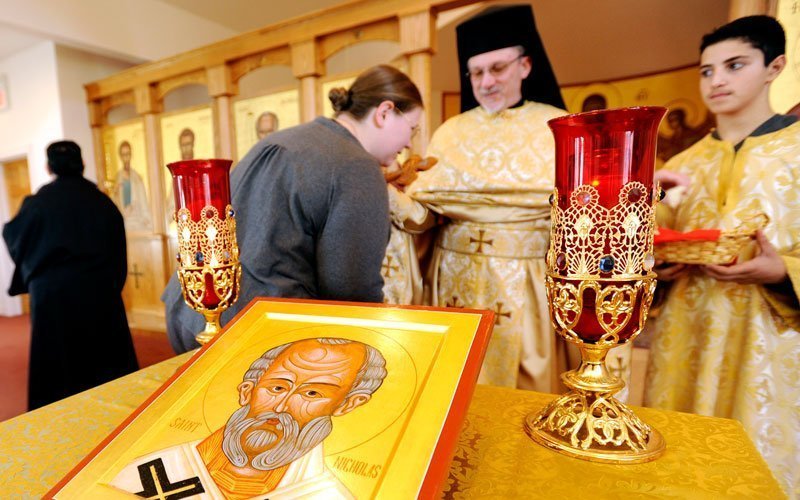 Parishioners of Gates’ St. Nicholas the Wonderworker Church stand near an icon of St. Nicholas Nov. 8 as they venerate a cross held by Father Kenneth Sherman. (Courier photo by Mike Crupi)

In popular culture, St. Nicholas is equated with Santa Claus — that jolly, rotund, grandfatherly North Pole resident who, with the help of elves and reindeer, squeezes himself down chimneys worldwide on Christmas Eve to bring toys for the kiddies.

Yet what has become a largely mythical storyline is based on somebody very real. St. Nicholas of Myra, a fourth-century saint, was indeed known for his immense generosity and is regarded as the patron saint of children in the Catholic Church.

St. Nicholas’ legacy is especially revered by two Eastern Catholic parishes — one in Chemung County and one in Monroe County — named after him. Both churches are planning special celebrations in honor of their patron saint on Sunday, Dec. 6, the feast day of St. Nicholas.

In the Southern Tier, parishioners of St. Nicholas Ukrainian Catholic Church will follow their 10:30 a.m. liturgy with a luncheon and program featuring songs and prayers in honor of St. Nicholas. Capping the event will be the parish’s long-standing tradition of an appearance by “St. Nicholas” to distribute gifts for children.

“Every year we do the same,” said Father Vasile Godenciuc, pastor.

Similar events are on tap at St. Nicholas the Wonderworker Parish in Gates. Right after the 10:30 a.m. liturgy, a program will begin that includes parish children donating nonperishable goods for the needy. From there, “‘St. Nick’ comes in with trinket bags and party bags, things that kids like. And then we go over the life of St. Nicholas,” said Father Ken Sherman, pastor.

St. Nicholas served as a bishop in Myra, which was located in present-day Turkey. “Wonderworker” often is added to his title due to the many miracles attributed to him. He is especially revered for his kind acts toward young people and the poor.

These characteristics have formed the basis for the modern depiction of Santa Claus in ad campaigns and in popular literature, art and music. But Father Godenciuc, for one, said he wishes more people knew about “the life of St. Nicholas, (how) he helped people in his life.”

Meanwhile, Father Sherman hopes that such Christmas carols as “Jolly Old St. Nicholas” and “‘Twas the Night Before Christmas” (“The stockings were hung by the chimney with care/in hopes that St. Nicholas soon would be there”) will serve as an ongoing reminder of the true inspiration for Santa Claus.

St. Nicholas Parish, founded in 1895 in response to a wave of Ukrainian immigrants to the Elmira area, is located at 410 E. McCann Blvd. in Elmira Heights. St. Nicholas the Wonderworker, formed in 1925 to accommodate Lebanese, Syrians and Palestinians in the Rochester vicinity, was originally located on the city’s northeast side before a new church was opened in 2000 — at 1492 Spencerport Road in the suburb of Gates.

Ukrainian Catholic and Melkite Greek worshipers are in full communion with the Roman Catholic Church, sharing the same sacraments, theology and dogma as their Latin-rite brethren. An Eastern Catholic liturgy fulfills the Sunday-Mass obligation for Roman Catholics and also follows the same basic structure as the Latin-rite liturgy. On the other hand, Eastern Catholicism — formulated in the late fourth century following the east-west division of the Roman Empire — holds some notable liturgical distinctions, according to Father Sherman: