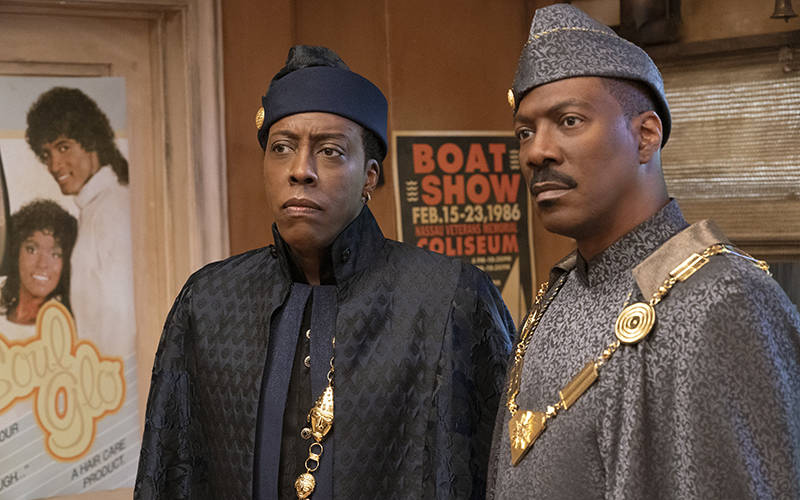 Arsenio Hall and Eddie Murphy star in a scene from the movie “Coming 2 America.” The Catholic News Service classification is A-III — adults. The Motion Picture Association rating is PG-13 — parents strongly cautioned. Some material may be inappropriate for children under 13. (CNS photo by Quantrell D. Colbert/Paramount Pictures)

NEW YORK (CNS) — It has been more than three decades since Prince Akeem (Eddie Murphy), heir to the throne of the fictional African nation of Zamunda, set out to seek a worthy consort in the New York borough of Queens.

Murphy and his collaborators have not been overly hasty in updating Akeem’s adventures. Despite the long period it’s been given for gestation, however, the sequel they’ve put together, “Coming 2 America” (Paramount/Amazon), turns out to be a slight and mostly unsatisfying comedy.

The follow-up sees Akeem succeed his revered and intimidating father, Jaffe Joffer (James Earl Jones), as king. Shortly before this event, he discovers that he has a son back in the States called Lavelle (Jermaine Fowler).

Lavelle was conceived during a marijuana-addled one-night stand. Yet, since neither Meeka (KiKi Layne), Akeem’s eldest daughter by his long-cherished spouse, Lisa (Shari Headley), nor her two younger sisters can legally succeed him, Lavelle must be trained to become Zamunda’s ruler.

The arrival of this unpolished lad and his equally down-to-earth mother, Mary (Leslie Jones), sets up a clash of manners at court as well as a rivalry with Meeka. Political complications, meanwhile, are brought on by the schemes of Gen. Izzi (Wesley Snipes), the military dictator of an impoverished neighboring country.

As Akeem’s adviser Semmi (Arsenio Hall) and Lavelle’s Gotham-based mentor Uncle Reem (Tracy Morgan) vie to influence the future sovereign, Lavelle learns similar lessons to those Akeem took on board in the first movie. Principally, these consist of being true to oneself and recognizing the realities of his complicated romantic situation.

Lavelle is initially happy to agree to an arranged wedding with Izzi’s bombshell of a daughter, Bopoto (Teyana Taylor). But the mere lust she evokes in him is in contrast to his deeper feelings for Mirembe (Nomzamo Mbatha), one of the servants he’s been assigned.

Working from a script by a quartet of screenwriters — Kenya Barris, Barry W. Blaustein, David Sheffield and Justin Kanew — director Craig Brewer relies on spectacle and low-minded gags to fill out their insubstantial story.

Good-natured mugging draws the odd smile. But when the dialogue turns serious, as it does with a recurring feminist theme — why shouldn’t Meeka inherit her dad’s role? Isn’t Mirembe’s independent streak much to be preferred to Bopoto’s boring submissiveness? — the baldness of the proceedings cannot be disguised.

The film contains much sexual and some scatological humor, references to prostitution, several mild oaths, about a dozen crude terms and considerable crass talk. The Catholic News Service classification is A-III — adults. The Motion Picture Association rating is PG-13 — parents strongly cautioned. Some material may be inappropriate for children under 13.