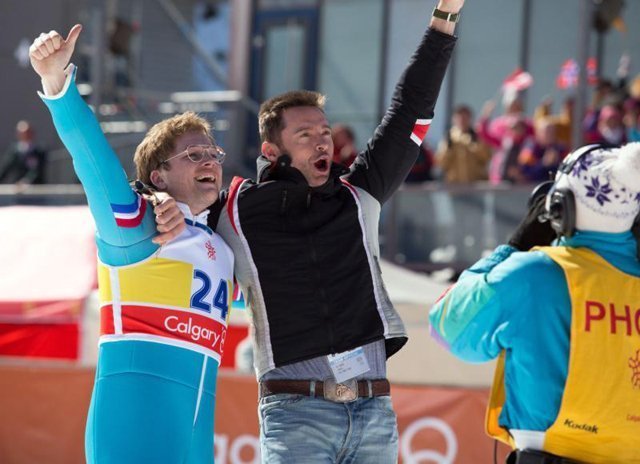 Taron Egerton and Hugh Jackman star in a scene from the movie "Eddie the Eagle." The Catholic News Service classification is A-III -- adults. The Motion Picture Association of America rating is PG-13 -- parents strongly cautioned. Some material may be inappropriate for children under 13.
By John Mulderig
Catholic News Service
NEW YORK (CNS) — The generally uplifting fact-based drama "Eddie the Eagle" (Fox) charms with the story of a working-class English lad who became, arguably, the most unlikely Olympic athlete in history.
As an inspiring tale of triumph over the odds, director Dexter Fletcher’s film ought to be perfect fare for teens. All the more so, since it also chronicles another central character’s battle with addiction. But the inclusion of some sexual humor — playing, ironically, on the protagonist’s innocence of such matters — will lower its score with parents.
Taron Egerton plays the title figure — a youth whose gumption, unswerving resolve and naive enthusiasm for his own accomplishments won him fans around the world when Canada hosted the 1988 Winter Games in Calgary, Alberta. Few among the cheering spectators may have appreciated the gamut of barriers Michael "Eddie" Edwards had been forced to overcome to get there, however.
As early scenes show, a childhood disability — never specifically identified — required Eddie to wear a leg brace until early adolescence. He also needed glasses, and eyesight problems may have contributed to what the movie portrays as his physical awkwardness and lack of natural grace.
Despite this near-total absence of inborn talent, Eddie harbors a deep-seated determination to become an Olympian. Almost by chance, he settles on skiing as his chosen sport.
Further stumbling blocks present themselves: Though Eddie enjoys the warm support of his nurturing mom, Janette (Jo Hartley), his practical-minded plasterer father, Terry (Keith Allen), relentlessly opposes his son’s wild dream, urging him instead to settle down and follow in Dad’s sensible footsteps. And then there’s the dyed-in-the-wool snobbery of the British sports establishment for whom Eddie is, well, not quite the right sort.
Blocked from joining the national ski team, Eddie makes another logical leap, deciding — more or less spontaneously — to take up ski jumping. Never mind that this is one of the most dangerous events in the Olympic canon, and that serious competitors normally begin training around the age of 6. Ski jumping it is.
So it’s off to the Bavarian resort of Garmisch, where Eddie’s pathetic solo attempts to master the sport draw the attention of grounds attendant Bronson Peary (Hugh Jackman). Once the most promising of American ski jumpers, Bronson frittered away his own chance for glory, distracted by girls and booze. By now he’s a washed-up, regretful, semi-alcoholic mess.
But the cynical front Bronson initially presents turns out to be no match for Eddie’s irrepressible moxie, and it’s not long before he finds himself serving as the newcomer’s unofficial coach.
Along with his inexperience on the slopes and in the bar — his drink of choice is milk; it’s good for the bones — Eddie is also implicitly presented as a novice in the bedroom. This becomes the occasion for some questionable jokes as our hero uncomfortably fends off advances from a female acquaintance he’s just met and as Bronson uses the humorously described dynamics of intercourse as a guide to what a successful jump feels like.
By including such material, screenwriters Sean Macaulay and Simon Kelton introduce caveats into any recommendation of their project for younger moviegoers. That’s a shame because, overall, the upward arc of Eddie’s life, intertwined with Bronson’s struggle for redemption, makes for buoyant viewing.
The film contains partial male nudity in a sauna, comic references to sexuality, at least one use of profanity and a couple of crass terms. The Catholic News Service classification is A-III — adults. The Motion Picture Association of America rating is PG-13 — parents strongly cautioned. Some material may be inappropriate for children under 13.
– – –
Mulderig is on the staff of Catholic News Service.
Copyright © 2023 Catholic News Service, Inc. All rights reserved. Linking is encouraged, but republishing or redistributing, including by framing or similar means, without the publisher's prior written permission is prohibited.