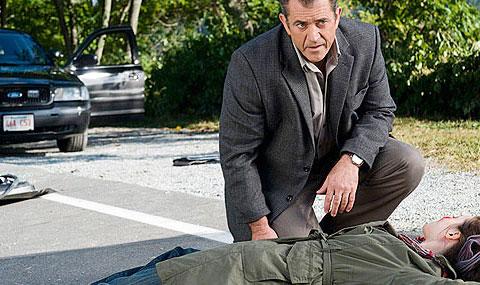 With Cold War tensions mounting at the time, the program achieved both popularity and critical acclaim, receiving six British Academy of Film and Television awards and being ranked 15th on the British Film Institute’s Top 100 Television list.

Now Campbell brings an Americanized version of his stark tale of loss and corruption to the big screen as the feature-length drama "Edge of Darkness" (Warner Bros.) starring Mel Gibson.

In his first leading role in seven years, Gibson plays Boston police detective Thomas Craven. A widower given to old-fashioned ways, Craven is an isolated figure whose only real emotional bond is with his adult daughter Emma (Bojana Novakovic).

So when Emma is brutally shot dead shortly after arriving at her father’s house for a visit — and before she can explain the nature of the illness that was causing her bouts of severe nausea — Craven is both emotionally devastated and reluctant to accept the theory that the bullets were meant for him.

Though Craven — whose Irish-American, and presumably Catholic, extraction is strongly signaled by Gibson’s credible shot at a "Southie" accent — utters a fervent but ultimately stifled prayer as he cradles Emma’s body moments after the attack, we later see him scattering her ashes in the ocean, a practice discouraged by the church as discordant with Gospel teaching on the resurrection of the body.

Predictably, Northmoor CEO Jack Bennett (Danny Huston) proves dissatisfyingly taciturn, while Emma’s boyfriend and co-worker Daniel Burnham (Shawn Roberts) is too terrified to give Craven more than a few clues. (A scene in which Daniel returns some of Emma’s belongings to her father suggests that the couple had shared a physical relationship.)

William Monahan and Andrew Bovell’s script — the miniseries was penned by Troy Kennedy Martin — provides a reasonably absorbing but gritty narrative that includes incidents of shocking violence. Thus, in addition to the gore that attends Emma’s killing, one of Craven’s informants is assaulted in a sudden, graphic, and thoroughly jarring manner.

As Craven closes in on those responsible for Emma’s death, the film also skirts the dark edges of vigilantism, though the extreme circumstances and the far reach of the conspiracy Craven uncovers at least partly justify his go-it-alone approach to exacting redress.

The film contains complex moral issues, considerable and sometimes bloody violence, an implied premarital relationship, a few uses of profanity and much rough and some crude language. The USCCB Office for Film & Broadcasting classification is L — limited adult audience, films whose problematic content many adults would find troubling. The Motion Picture Association of America rating is R — restricted. Under 17 requires accompanying parent or adult guardian.