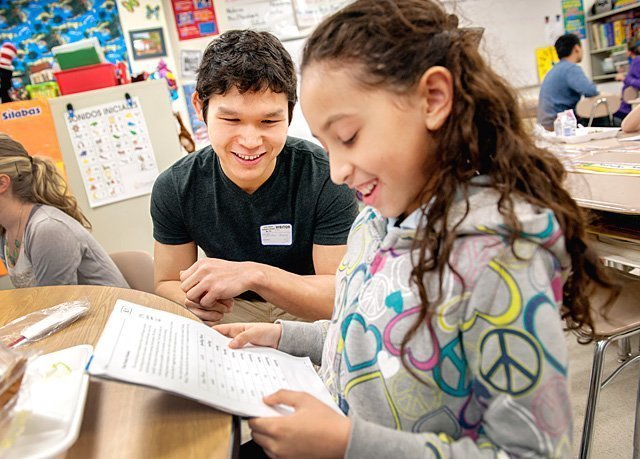 Michael Cheung, a senior at the University of Rochester, tutors second-grader Kiara Vega at Rochester's School No. 33.

Any discussion about poverty must include education.

So say local education and community leaders, who note that without improved city high-school and college graduation rates, the level of poverty in Rochester is not likely to change.

But trying only to increase the high-school graduation rate is a “small picture” viewpoint, according to the Rev. Alan Newton, executive minister with American Baptist Church of the Rochester/Genesee Region.

“Yes, we need more graduates,” he acknowledged. “But we can graduate every kid and if they’re not ready to go to college, we’re not going to break the cycle of generational poverty.”

Providing additional support and guidance from adults who serve as mentors may help students see how to break that cycle. Sandy Parker, executive director of the Rochester Business Alliance, said young people who lack adult role models would benefit from a program like the Hillside-Work Scholarship, which pairs students with successful mentors. Businesses also can partner with schools to provide volunteers who would serve as role models for students and help families understand the value of education, she suggested.

Providing better guidance and improving high-school graduation rates and college access also are among the goals of the Anti-Poverty Commission of Richmond, Va., said Thad Williamson, a commission member who is associate professor of leadership at the University of Richmond.

The commission has begun to create a pilot scholarship fund that would enable qualifying students to attend a state college or university in Virginia, he said. Additionally, the Richmond city school schools will expand their guidance-counseling services to boost students’ awareness about college opportunities, Williamson added.

“We want to get students in high school to think about college and career as soon as possible,” Williamson said.

The percentage of Richmond city students who graduate from high school is in the mid-70s, which is the lowest in that part of Virginia. The Rochester City School District’s graduation rate is 43.4 percent.

Rev. Newton noted that too few Rochester students are qualifying for programs that offer them tuition-free education at the University of Rochester and Rochester Institute of Technology. He described these programs as good and effective, but also said they are for “creme of the crop” students.

Nearly 70 more students have qualified for scholarships, and many were valedictorians of their schools, according to an article at www.rit.edu/news/story.php?id=50630. According to RIT officials, the institute’s City Scholars program has achieved an 81-percent retention rate, and 42 percent of its students have earned grade-point averages of 3.0 or higher. Twenty-one of the 27 students in the first City Scholars class are on target to graduate this May, according to RIT’s Office for Diversity and Inclusion.

Last fall, UR renewed its Rochester Promise Scholarship program, which has provided scholarships to more than 70 students since it was created in 2007.

Scholarships also are open to students in Buffalo and Syracuse, where city officials have turned to a national program designed to offer those opportunities to help change attitudes about going to college.

The Say Yes to Education program, which operates in both cities, has established partnerships with 60 colleges and universities to provide scholarships to students whose families have incomes below $75,000, explained Jacques Steinberg, senior vice president for higher education and communications with Say Yes. The program also offers wrap-around services — including tutoring, health and emotional well-being programs — to families through initial grants and subsequent community resources, he said.

Say Yes began with a group of 112 students in Philadelphia in 1987, Steinberg said. And since the inception of the national nonprofit organization, which arrived in Syracuse in 2008 and Buffalo in 2012, a total of approximately 3,600 students from have gone on to college, he added.

Last year, the organization celebrated the graduations from four-year colleges and universities of the first class of 97 Say Yes Syracuse Scholars.

And last month, the Buffalo Public Schools announced that 66 percent of those who had graduated from Buffalo schools in 2013 as part of the Say Yes program had enrolled that fall in two- or four-year colleges or universities, Steinberg said. That represents a 9-percent increase from the year before, he noted.

The Say Yes model has yet to make a sustained impact on the graduation rates in Buffalo or Syracuse, Steinberg noted. But he said the organization is encouraged by the increase in college enrollment in Buffalo as well as the reduction in Syracuse’s high-school dropout rate, which declined from 32 percent in the 2009-10 school year to 28.9 percent two years later.