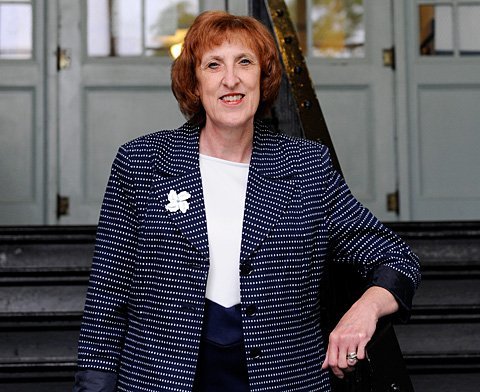 Kathleen Dougherty, principal of Holy Cross School in Charlotte, will retire at the end of the school year.

When asked whether she wanted a party for her final days as a principal in the Catholic-schools system, Kathleen Dougherty said she’d prefer to give students at Charlotte’s Holy Cross School a positive, lasting memory: a dance party outside on the last day of school.

Dougherty said she loves to dance, and she can’t think of a better way to wrap up the end of the school year than with a little time doing the Electric Slide.

"I want that to be a lasting memory I give to them," she said of the students.

Dougherty has maintained a focus on children ever since deciding to become a teacher. She attended St. Bonaventure University and taught five years in the public school system in Bolivar, N.Y., before moving to the Rochester area. She taught fifth grade at St. Theodore School in Gates then stayed at home with her children for a decade before teaching fourth grade at Sacred Heart Cathedral School in Rochester for 10 years.

"Sister Pat Carroll kept encouraging me to think about going into administration," Dougherty said of the Sister of St. Joseph, who at the time was assistant diocesan schools superintendent.

Dougherty became vice principal at All Saints Academy in Brighton while getting her administrative degree, and then she was named principal of Rochester’s Holy Rosary School in 2004. When Sacred Heart Cathedral School consolidated with Holy Rosary a year later as part of a consolidation of seven Catholic schools into three, Dougherty became principal of Cathedral School at Holy Rosary. She said all staff members lost their jobs and had to reapply, and it was difficult having to choose people to bring on.

"In the midst of it, my father was dying," she said, noting that she drove to Alleghany County several times a week to stay with him as her family took shifts with his care.

There were a host of new challenges with which to contend in 2011 when she was tasked with blending Cathedral School at Holy Rosary and Our Mother of Sorrows School into a new school that was to open at the former Holy Cross School building. Holy Cross School had closed in 2008.

Yet the success of reopening a school at Holy Cross has been apparent in the growth of the new school, she said.

"I think it has come together really well," Dougherty said. "We hit the 300 mark of students, and I hear people come to us saying they heard great things about us."

She said Catholic schools are able to offer families the chance to grow their children’s spirituality.

"That’s why our families come to us," Dougherty said. "They are excited about the faith-filled environment. That’s what makes us different from a public school.

Though she is passionate about Catholic education, Dougherty said she is looking forward to having free time to pursue her other passions: gardening, refinishing furniture and fixing up her home. She said she also is looking forward to spending more time with her four children and six grandchildren — and another on the way — as well traveling to Ireland and Alaska.

At press time, a replacement for Dougherty had not been announced.