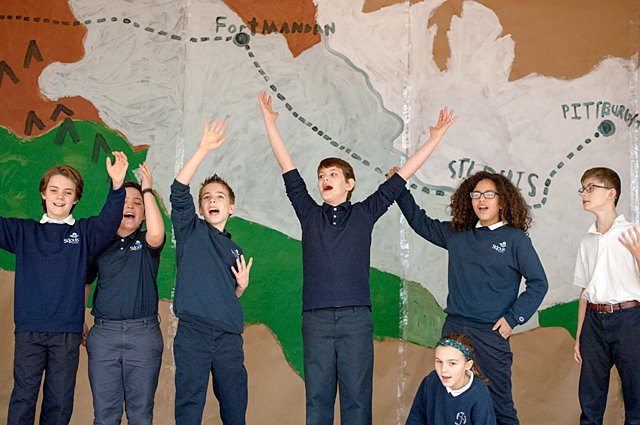 Fifth-graders at St. Louis School in Pittsford rehearse Jan. 20 for their musical production, “The Adventures of Lewis and Clark.”

"Go back and let’s do it again," music teacher Elizabeth Gowman told a group of fifth-grade students standing on stage Jan. 20 inside Reddington Gymnasium at St. Louis School in Pittsford. The students had spent part of that morning rehearsing for their upcoming musical, "The Adventures of Lewis and Clark."

Across town, a similar scene played out after school Jan. 21 in Deacon Hall at St. Lawrence School in Greece, where students have just begun rehearsals for their spring musical, "Happily Forever After."

St. Louis and St. Lawrence are among several diocesan Catholic elementary schools that are expanding their music- and arts-education programs, as well as extracurricular programs, to include the performing arts. While Catholic elementary schools have offered traditional band and choir options for years, many are now offering additional ways in which students can participate in the performing arts, which teachers say help youths build confidence and character as well as explore their talents.

Making of a musical

During music classes this past fall, fifth-graders at St. Louis School started working on their musical, which will be performed Feb. 9. This year, the students chose a musical about explorers they were learning about in other classes.

"The students did a two- to three-month interdisciplinary student unit at the beginning of the school year all centered around (Meriwether) Lewis and (William) Clark, the Corps of Discovery, and westward travel and exploration," explained Gowman, who has been coordinating the fifth-grade musical for the past nine years.

Gowman found the musical "The Adventures of Lewis and Clark" by Roger Emerson and John Jacobson, and students added and subtracted to the script based on what they had learned in classes, she said.

"The script we are using is the end result of their creativity," she added.

Gowman said all the fifth-grade students are involved in the production in some way. Those who were interested in portraying main characters in the show prepared auditions for a panel of judges. Those who did not have an interest in performing have undertaken such work as set design and publicity, Gowman said.

"There are a few children every year for whom performance does not stir positive thoughts," she remarked. "Since all the students get a say in what they do to participate, everyone comes up with some way of fulfilling my expectations of teamwork and collaboration."

Rex Kesselring, who plays William Clark in the show, said he did not realize how much work goes into putting together a musical.

"It is a different experience because I have never done a musical before," he said. "I never knew there was so much stuff that goes behind making it."

"It is harder than it seems, especially memorizing all the lines," she said.

At St. Lawrence, the students are just starting to learn the music and choreography for their show, which will be performed in May. Musical director and choreographer Sara Collum, who teaches second grade at the school, said this is the third consecutive year St. Lawrence has done a musical production. This year, the students are performing "Happily Forever After" by Little Big Stuff, a company that creates Christian-based musicals for kids.

"It is difficult to find musicals with good Christian values," Collum explained.

Participating students, who are in third through sixth grades, rehearse after school every Tuesday and Thursday. Collum said the production is mostly student run, noting that in addition to their parts in the show, the students also determine what props and sets are needed. She said parent volunteers will help with hair, makeup and costumes for the production, and plan a cast party for the students.

"The students get to learn about what it takes to put together a production," Collum noted. "It is a student-run musical. We just help guide them along the way." 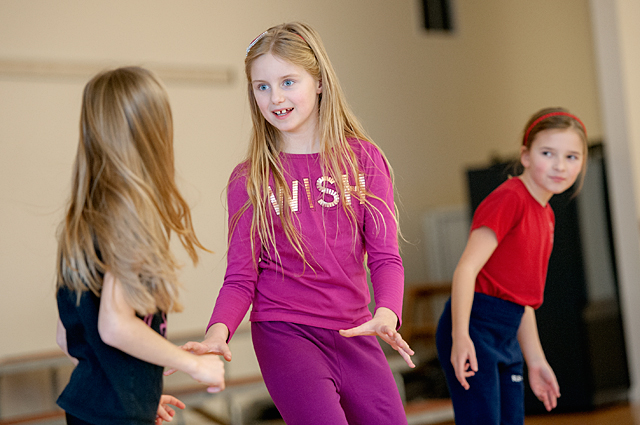 A local theater company also is helping to guide schools that want to infuse arts into the classroom. For example, St. Joseph School in Penfield is one of three area schools working with the Rochester Broadway Theatre League as part of RBTL’s arts education program, "Beyond the Curtain," which strives to combine the rigor of the classroom with the world of theater.

Participating schools "have showed a real commitment to incorporating the arts in their curriculum and learning," observed Holly Valentine, RBTL’s associate director of education.

St. Joseph School has been involved in the RBTL program since it began in 2014, Valentine noted. This year, the program will coincide with the production of Roald Dahl’s "Matilda," which will be on stage at the Auditorium Theatre in Rochester April 12-17. Based on the popular children’s novel, "Matilda" tells the story of an exceptionally smart, young girl who has a vivid imagination as well as telekinetic powers to fight back against her evil parents and school principal.

Valentine said the educational program will start in the next few weeks in the fifth-grade classrooms of Maria Spencer and Grace Tischer. The literacy-based curriculum Spencer and Tischer will be receiving from RBTL meets New York state’s Common Core standards and involves a lot of reading and writing, Valentine said. She noted that students will read the novel, identify its themes and apply them in their classroom activities. For "Matilda," Valentine said the students will focus on the themes "You have the power to write your own story" and "Even if you’re little, you can do a lot."

In addition to the curriculum, the RBTL program includes a multimedia component called Skyping Partners. Each classroom participating in the program is paired with a member of the cast, who speaks to the students via the video-calling service Skype before they see the show, Valentine said.

"The Skyping Partners builds a personal connection, so that when the students see the show, they feel as though they have the extra connection to it," she explained.

Valentine said response to the program has been phenomenal, not only from teachers, but from students as well.

"The energy in the classroom and the willingness and desire to learn I just see skyrocketed when it is centered around a show like this," Valentine said.

Importance of the arts

RBTL and local educators are not the only ones to recognize the value in performing arts programs. A 2012 study from the National Endowment for the Arts demonstrated such academic benefits as improved standardized test scores and higher graduation rates as a result of exposing students to the arts.

"I firmly believe that when a school delivers the complete education to which every child is entitled — an education that very much includes the arts — the whole child blossoms," NEA Chairman Rocco Landesman wrote in the study.

The NEA study also found that socially and economically disadvantaged students who had access to arts education had better school grades, test scores, college enrollment and achievement than those students who lacked a proper arts education.

Despite such findings, public-school districts around the country continue to cut or eliminate funding for arts-education programs, with many shifting those funds to support programs that involve testing, such as math and language arts, according to the 2010 study "No Child Left Behind: A Study of Its Impact on Art Education" by F. Robert Sabol of Purdue University.

When public schools pare down or eliminate arts-education programs, parents and students who see the benefits of such programs are left to find other options, such as private schools that offer arts programs, or offerings through such community organizations as RAPA (Rochester Association of Performing Arts) or the Hochstein School of Music and Dance. Due to the costs of such programs, these alternatives — and the educational benefits they provide — are out of reach for many.

When arts education is not provided as part of school curricula, students are not only missing out on educational benefits, but also on opportunities to develop important life skills, educators say.

Gowman noted that the performing arts, especially putting on a musical production, can teach students such life skills as how to accomplish long-term goals and carry out individual roles within a group project.

Even if students do not express interest in participating in the arts or theater in the future, Gowman said taking part in a musical or drama production instills the confidence to try other things. She said some of her students have gone on to join such clubs as Lego League and Odyssey of the Mind, which both have theatrical components.

"The kids learn about teamwork, perseverance and hard work," she said of participation in the performing arts. "Putting these skills in a fun and interactive context at an age where children are still willing to try new things makes sense."