Eight men to be ordained to permanent diaconate - Catholic Courier 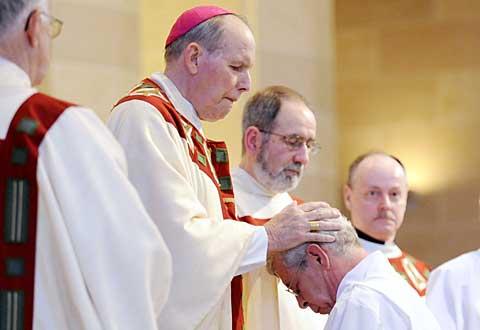 With an eight-member class soon to be ordained, the Diocese of Rochester will gain a sizable addition to its coalition of more than 100 active permanent deacons.

According to Deacon David Palma, diocesan director of deacon personnel and formation, the Class of 2010 is the largest in many years. Members have completed extensive studies at St. Bernard’s School of Theology and Ministry as well as considerable field ministry.

This octet of men will be ordained by Bishop Matthew H. Clark Saturday, June 5, during a 10:30 a.m. Mass at Sacred Heart Cathedral, 296 Flower City Park, Rochester.

Mark Bovenzi said several people suggested the diaconate to him in the past, and seeing deacons in action convinced him to explore that vocation.

"Of all the deacons I had been exposed to, there seemed to be sincere joy in their service," said Bovenzi, whose late uncle, Deacon Robert Solan, was in the first class of deacons in the Rochester Diocese in 1982.

Bovenzi, 56, belongs to Christ the King Parish in Irondequoit. He and his wife, Marcia, have four children. He has been employed by Wegmans Food Markets for 39 years.

"I have always felt a special call to service," said Patrick DiLaura, noting that he served for four years in the U.S. Army and later became involved with the United Way and the Make-A-Wish Foundation. "All were wonderful experiences, but I always knew there was something missing."

He found that missing link after a 2003 conversation with Sister Barb Stinard, RSM, whom he described as "an incredibly spiritual person." He also credited "family, friends and spiritual companions that have accompanied me on this incredible journey."

He belongs to Church of the Assumption, Fairport. He and his wife, Roxanne, have two children. DiLaura is chief talent officer with Klein Steel Service Inc.

Peter Dohr is entering the diaconate after having served in a number of parish roles over the years.

Dohr has been a choir member, lector, trustee and finance-council chair at St. Paul of the Cross in Honeoye Falls, as well as youth-group coordinator with his wife, Patti. He said his path to the diaconate was aided by family and friends — "especially my wife and my classmates in the mighty Class of 2010, because this is not a journey meant to be taken alone."

His field ministry was done through Catholic Charities of Livingston County, Rochester General Hospital and Henrietta’s Church of the Good Shepherd Parish.

Dohr, 49, and his wife have three children. He is vice president of property management for Baldwin Real Estate Corp. in Rochester.

The importance of caring for others was modeled to Joseph Erway from childhood, due to his parents having owned an ambulance service.

"I was exposed to various life situations at an early age. It gave me a greater respect for the gift of life and how precious it is," he remarked.

He and his wife, Sharon, belong to St. Mary’s Southside Parish in Elmira. He has three stepchildren and two stepgrandchildren and is a business travel counselor for American Express.

"I felt that God wanted me to do more than just attend Mass every Sunday. I believe that God does his works in us through our hearts," he said of his call to the diaconate. "All we need to do is listen."

Raymond Garbach hopes his becoming a deacon will inspire others to focus on service.

"I have a calling to give back to the church for all of the blessings that I have in my life, and as praise and honor to the dear Lord who has blessed us so richly," he commented. "I hope that in some small way I am able to awaken others to give of self to those in need."

Garbach, 58, belongs to St. Joseph Parish in Penfield. He and wife, Kathleen, have five children and three grandchildren. After 32 years at Eastman Kodak Co., Garbach now works for Carestream Health in the Supply Chain Management and Logistics organization as a transportation manager.

Paul Sartori’s inspiration for the diaconate has stemmed in part from his role as director of the Chemung County Law Guardian Office, representing children in Family Court and Supreme Court cases.

"I began to become more aware of God’s presence in my life, particularly in the brokenness of the families I serve," said Sartori, who has practiced law for nearly 25 years.

Sartori said he also was influenced through the example set by his parents, who "raised us to love our faith and to be concerned for the needs of others."

Sartori, 51, is a parishioner of Elmira’s Blessed Sacrament Parish, and he holds many parish and community roles.

"I have always been interested in helping others, especially in matters of the faith," said Lon Smith, citing involvement with religious education and pre-Cana along with his wife, Susan. He was later heavily influenced by the Cursillo movement.

Smith, 52, did his field ministry at Bethany House, Monroe County Jail and Rochester’s St. Monica Parish. He is a parishioner of Our Mother of Sorrows in Greece. He and his wife have two children and one grandchild. Smith, whose background is in science and engineering, currently works for Biophan Technologies Inc. in research and development.

"I can’t wait; I feel like a kid two weeks before Christmas," he said of his ordination.

A few years back, Thomas Uschold got a big vote of confidence about his future vocation from Deacon Larry Feasel.

"He was very passionate, saying, ‘The little bit I know about you, you’d be an outstanding fit,’" Uschold recalled, saying he chalked that talk up to "the Holy Spirit putting people in place to tell me about this diaconate."

Uschold did field ministry with Grace Urban Ministries, Unity Health System and St. Theodore Parish in Gates. At Grace he enjoyed serving free dinners and meeting patrons — an experience that involved "a completely different way of thinking" than in his professional life.

Uschold, 55, is a member of St. Jude Parish in Gates, and he is a finance-department manager for the Monroe County Water Authority. He and his wife, Ruth, have three children and one grandchild.