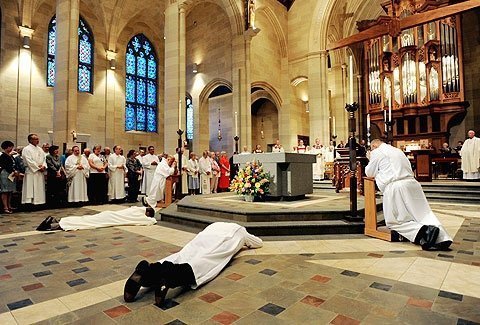 Candidates prostrate themselves near the altar during the 2011 Deacon Ordination Mass at Sacred Heart Cathedral.

With an eight-member class soon to be ordained, the Diocese of Rochester is about to gain a sizable addition to its ranks of more than 100 active permanent deacons.

Those to be ordained have completed studies at St. Bernard’s School of Theology and Ministry along with a diversity of field ministry. The Class of 2012 will be ordained by Bishop Matthew H. Clark Saturday, June 2, at 10:30 a.m. at Sacred Heart Cathedral, 296 Flower City Park, Rochester.

Dan Callan said his path to the diaconate began with exposure to deacons in a U.S. Air Force spiritual program in Florida.

"They drafted me to teach adult religious education and said, ‘You know, you ought to be a deacon,’" he recalled.

Callan, 52, belongs to St. Frances Xavier Cabrini Parish in his native Rochester. He and his wife, Patricia, have three children and also have parented 12 foster children. Now retired from the military with the rank of lieutenant colonel, he has been stationed in many parts of the U.S. as well as in Germany. He has a doctoral degree in industrial engineering design, yet his present focus is ministering to city residents, with an emphasis on youth.

Matt Dudek’s first career was in newspapers, yet "little did I know the Holy Spirit was grooming me all that time for another vocation," he said. "From growing up with loving parents through my Catholic upbringing and education and my career with Gannett, the Holy Spirit provided wise mentors."

He also was inspired by religious writer Henri Nouwen and the examples of Charlotte Bruney and Father Ted Auble, then the pastoral administrator and sacramental minister, respectively, at his parish, St. Vincent de Paul Parish in Churchville.

Dudek, 60, did field ministry at Rochester Psychiatric Center, Lifetime Care and St. Monica Parish in Rochester. He and his wife, Jeanne, have two children. He retired in 2011 from Gannett Company Inc. after 38 years, serving in editorial, financial and administrative positions there.

As a deacon, Ed Knauf plans to continue his strong commitment to marriage/family ministry.

"The institution of marriage and the family unit are under severe strain and even attack in our contemporary culture and we, as church, need to do all we can to strengthen and support Christian marriages and Christian families," he explained. Knauf and his wife, Pam, have been active in pre-Cana programs at their parish, Blessed Kateri Tekakwitha in Irondequoit, and as leaders in Worldwide Marriage Encounter.

Knauf, 52, did his field ministry with Heritage Christian Services, Lifetime Care and the University of Rochester Newman Community. He also has led three trips to New Orleans for hurricane relief. He and Pam have three children, and he is a corporate controller for Performance Technologies.

The call to the diaconate is not always something easily articulated, John Pattison observed from his own experience.

"The only way I can explain it is, I just had to do it," he remarked. "The pull to become a deacon has never waned at all; if anything, it’s intensified."

Commenting on the many professional and ministerial gifts of his fellow deacons-to-be, he said, "My brothers are a wonderfully diverse group of men."

Pattison, 61, converted to the Catholic faith 20 years ago and is a parishioner at Church of the Assumption in Fairport. He and his wife, Paula, have two children. He is currently a partner with the Harter Secrest & Emery law firm, specializing in telecommunications law.

Ministry has lurked within Tom Ruda since he was a seminarian in Indiana in the 1970s.

"My calling to the diaconate came when I realized what it was about, and how it fit my call to service in the church and community. Becoming a deacon is for me logical part of the path I have been following," he said.

Ruda, 54, serves as pastoral associate for Schuyler Catholic Community, where he fills several roles, with a special focus on leading contemplative group prayer. He’s on the Schuyler Catholic Charities advisory board and a volunteer chaplain at Monterey Correctional Facility. He and his wife, Nancy — whom he met while doing apostolic work with Covenant House — have four children.

"All I know is I have been called and nudged many times to become (a deacon), far more than I can remember," Elmer Smith said, adding that he eventually realized "something significant is going on and I need to pay attention."

Smith, 57, is a longtime parishioner of St. Charles Borromeo in Greece where he lectors. He was active in Boy Scout Troop 240 and currently serves as chapter secretary of the Finger Lakes Chapter of the International Council on Systems Engineering (INCOSE). He and his wife, Anne Marie, have one child. He is a systems engineer/programmer analyst for Excellus BlueCross BlueShield.

Dave Snyder views his impending diaconal service as an ideal way to help bring others closer to God.

"Everybody’s personal lives, as well as the world in general, are filled with challenges– spiritual, physical, emotional and mental — but God is always there to help get us through them, if we ask and if we listen," he said.

He logged his field ministry with Saint’s Place, Lifetime Assistance and St. Paul Parish in Webster.

Snyder, 61, belongs to St. John of Rochester Parish in Fairport, where he has been active in Boy Scouts, parish pastoral council, Respect Life and liturgical roles. He and his wife, Barb, have three children and six grandchildren. He is a longtime electrical engineer/engineering manager at Harris Corporation — RF Communications.

"I have been inspired to serve the Lord for most of my life," said Mike Zuber, who noted that he once planned to attend seminary. "The diaconate has prepared me to turn volunteering into an opportunity to be sent by God into God’s ministry. For this I am a very blessed man."

Zuber, 58, belongs to the Rush-Henrietta cluster of Good Shepherd, Guardian Angels and St. Joseph, where he is an extraordinary minister of holy Communion and lector. He and his siblings also volunteer at soup kitchens. He and his wife, Audrey, have two children and five grandchildren with a sixth on the way. Zuber currently is vice president of behavioral health at Erie County Medical Center.