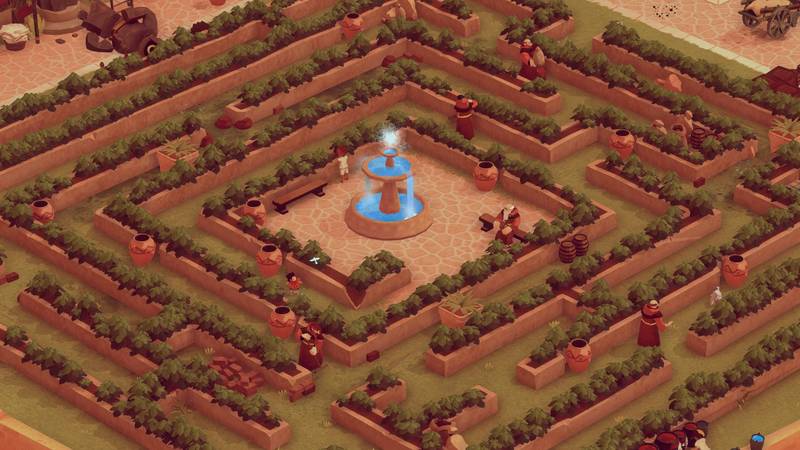 This is a scene from the video game “El Hijo: A Wild West Tale.” The Catholic News Service classification is A-II — adults and adolescents. The Entertainment Software Ratings Board rating is E — everyone. (CNS photo courtesy HandyGames)

While this stealth puzzle game’s visuals are inspired by Italian director Sergio Leone’s spaghetti Westerns, it’s almost entirely free of the violence by which those films were often marked. Some topics unsuited to small fry aside, accordingly, this is a family-friendly title that features unique art, an atmospheric soundtrack and cunning level designs.

After bandits burn their family homestead to the ground, a mother makes the difficult choice to leave her 6-year-old son in the safety of a monastery.

The titular character, however, is unwilling to let Mom face her troubles alone, and sets out on an adventure. His journey takes him across three different environments: the busy religious community, a harsh desert and a frontier town brimming with untold dangers.

Leone’s fistful of dollars is exchanged for a fistful of stones as El Hijo, armed with only a slingshot and his wits, engages in playful mischief without evading the very real fears and concerns of a child lost in a world of adults. He must move obstacles out of the way, avoid the grown-ups — including the well-meaning monks — and inspire other children to aid him in his effort to reunite with his mother.

Some of the kids El Hijo encounters give him more toys to use on his quest, such as stink bombs, a spinning top and even small fireworks. Jarringly, though, others of the children he comes across are in cages, ready to be sold off for labor — until, that is, the intrepid little boy helps them escape.

For adult players, such incidents will serve as a reminder of the pervasiveness of modern-day slavery, an evil which Pope Francis discussed recently at the Seventh World Day of Prayer, Reflection and Action Against Human Trafficking.

Shadow and light play an important role in the game mechanics. The smallest sliver of shade will protect El Hijo from being spotted. But if an adult sees him in the open and catches him, the gamer will be sent back to his or her most recent checkpoint.

Some of the artwork shows El Hijo, seen in the light, with a teddy bear in his hand. But, at these moments, his shadow takes on a more sinister form: the stuffed animal is transformed into the silhouette of a gun. The action includes some shootouts, moreover, but there are no graphic visual effects or deaths.

With nearly 30 levels to complete, “El Hijo” offers around 15 hours of gameplay and features easy control mechanics. The hand painted artwork and original music draw players still further into this fantastical version of the Old West.

The game contains mature themes and mild cartoonish violence. The Catholic News Service classification is A-II — adults and adolescents. The Entertainment Software Rating Board rating is E — everyone.