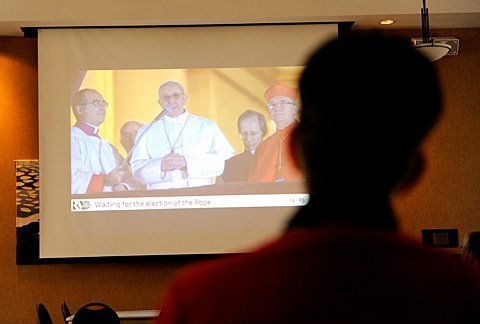 Employees of the diocesan Pastoral Center watch on a large screen as Pope Francis makes his first appearance at the Vatican March 13.

GATES — Call it the Catholic version of March Madness 2013.

Nearly 60 employees of the diocesan Pastoral Center flocked to the building’s Bishop Hickey Conference Room at mid-afternoon of March 13 — not to watch college basketball, as is the case for workers in many other places at this time of year. Rather, the purpose was to view a live broadcast announcing and introducing the new leader of their church.

The room was abuzz in anticipation of what was about to occur, as the scene from the Vatican was projected onto a big screen. Deacon John Brasley, diocesan director of deacon personnel and formation, and Jennifer Burke, staff writer for the Catholic Courier, reminisced about having journeyed to St. Peter’s Square themselves — although both acknowledged their visits were much calmer than the seemingly endless sea of wildly cheering people being shown.

When the announcement came that the new pope was Cardinal Jorge Mario Bergoglio, SJ, an Argentinian, it was Brother Juan Lozada’s turn to be ecstatic. He pumped his fists and exulted along with Deacon Sergio Chavez.

And for good reason: Cardinal Bergoglio, who is taking the name Pope Francis, is to be the first Latin American pontiff in history. Brother Lozada, coordinator of Hispanic family life in the diocesan Office of Parish and Clergy Services, is a native of Puerto Rico; Deacon Chavez hails from Colombia.

Brother Lozada said he’d been hoping for a Latin American pope, but didn’t think it was likely since it had never before occurred.

"Not really," he remarked. However, Brother Lozada added that the cardinals in papal conclave showed good wisdom with their choice.

"Latin American is a very vibrant church, a growing church. This will help the people to grow in their Catholic faith, feel more empowered," he said.

Deacon Chavez, as well, said he was pleasantly surprised at the selection of Cardinal Bergoglio.

"I was amazed," he said, adding his happiness goes out "not only for the people of Argentina, but Latin America and the world and church." Meanwhile, Brother Lozada pointed out that joy should be felt not only by people of Spanish heritage but by all Catholics in South, North and Central America.

Sister Janet Korn, RSM, diocesan coordinator of mission and outreach services, served as a missionary in Chile for 16 years and also was delighted that Cardinal Bergoglio was chosen.

"I want to e-mail our sisters in South America right now and see if I can get any line on him," Sister Korn said. "I feel encouraged. He seems like a holy man."