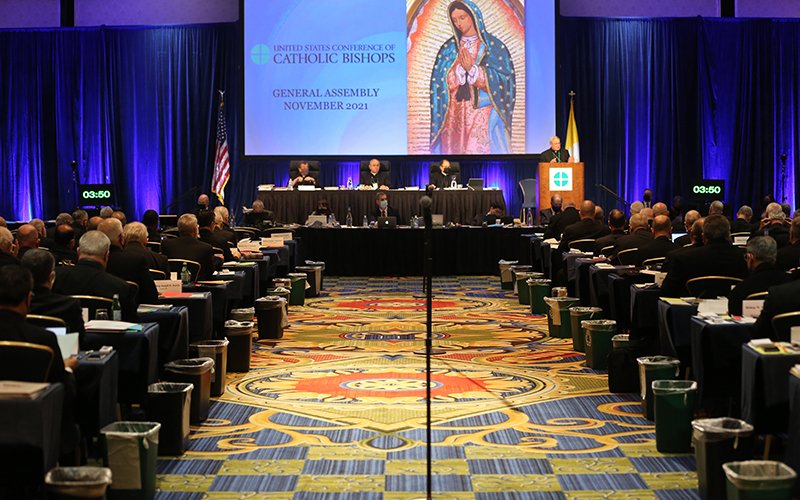 Bishops attend a Nov. 16, 2021, session of the fall general assembly of the U.S. Conference of Catholic Bishops in Baltimore. The bishops' 2022 general assembly will be held Nov. 14-17. (CNS photo by Bob Roller)

WASHINGTON (CNS) — The fall general assembly of the U.S. Conference of Catholic Bishops will find the bishops voting on a new president and vice president and how to proceed in disseminating their quadrennial document on Catholic participation in public life.

The agenda for the Nov. 14-17 gathering also incorporates more time for prayer and reflection with opportunities for wider engagement and interaction with each other to build fraternity.

Public sessions are scheduled for the afternoon of Nov. 15 and all day Nov. 16.

USCCB leaders will be elected from a slate of 10 candidates nominated by their fellow bishops.

In addition, the bishops will vote on chairmen-elect for six standing USCCB committees.

The candidates for president and vice president are, in alphabetical order:

— Archbishop Timothy P. Broglio of the U.S. Archdiocese for the Military Services.

Chairmen-elect will be chosen for the committees on Canonical Affairs, Ecumenical and Interreligious Affairs, Evangelization and Catechesis, International Justice and Peace, the Protection of Children and Young People and Religious Liberty.

The six bishops elected will serve for one year as chairmen-elect of their respective committee before beginning a three-year term as chairman at the conclusion of the bishops’ 2023 fall general assembly.

Also on tap is a discussion on “Forming Consciences for Faithful Citizenship,” the bishops’ document developed as a guide to help Catholics form their consciences in voting and other areas of public life. The bishops will decide what steps to take regarding to whether to begin a routine update or significantly revise the document.

The document was last updated in 2019 and remained unchanged except for the addition of an introductory letter addressing issues of importance to the Catholic Church It was supplemented by four videos in both English and Spanish focusing on Catholic teaching on poverty, immigration, abortion and the care of creation.

The outcome of the discussion will guide USCCB staff members as they prepare any changes in the document and develop related materials over the next year. The bishops will vote on the final document during their 2023 fall general assembly with dissemination of it in advance of the 2024 election.

Archbishop Lori, who chairs the bishops’ Committee on Pro-Life Activities, will provide an overview of how the church can respond following the U.S. Supreme Court’s June 24 ruling in Dobbs v. Jackson Women’s Health Organization that overturned Roe v. Wade, returning the issue of abortion to the states.

His presentation follows an Oct. 26 letter that Archbishop Lori and three other USCCB committee chairmen sent to all members of Congress calling for “radical solidarity” with mothers and babies — born and unborn — and advancing an ambitious legislative and policy agenda that prioritizes the well-being of families.

Archbishop Leonard P. Blair of Hartford, Connecticut, chairman of the bishops’ Committee on Divine Worship, will present for approval revisions in rites related to the anointing of the sick and lay ministry for the sick as well as liturgical texts for two recently instituted feast days.

Other votes to be taken at fall general assembly

The revision follows work undertaken by the International Committee on English in the Liturgy, or ICEL, to bring the prayers closer to the original Latin text promulgated in 1972, said Father Andrew Menke, executive director of the bishops’ Secretariat on Divine Worship.

Votes also will be taken on English- and Spanish-language editions of “Lay Ministry to the Sick,” a proposed collection of excerpts from various liturgical books. The texts include the prayers and rites that can be used by lay ecclesial ministers in their ministry to the sick. The material was drawn from multiple sources traditionally used in such ministry.

The last vote will come on liturgical texts for two optional memorials inscribed by Pope Francis in January 2019. The texts are included in an ICEL document known as a “gray book” issued in May 2021. The memorial for St. Paul VI is observed May 29, while the memorial for Our Lady of Loreto is observed Dec. 10.

Approval of all texts requires a two-thirds vote of the Latin-rite bishops. “The Order of the Anointing of the Sick and of their Pastoral Care” also requires “recognitio” from the Vatican.

Update on the canonization causes of three American women

Updates on the canonization causes of three American women will be presented during the assembly. The bishops will vote whether to advance the causes of Cora Evans, Michelle Duppong and Mother Margaret Mary Healy Murphy.

Evans, a wife, a mother, and possible mystic, was baptized Catholic in Utah in 1935 after becoming disillusioned with the Mormon faith. Born in 1904, she moved to California with her family in 1941. She died at age 74 in Boulder Creek, California, March 30, 1957.

Promoters of her sainthood cause in the Diocese of Monterey, California, have said she reported multiple visions of Jesus and the saints and received a mission from Jesus to promote the “mystical humanity of Christ,” the idea that Christ is always with people and people should behave always as Christ would.

The Diocese of Bismarck, North Dakota, in June opened an investigation into “the holiness of life and love of God” of Duppong, who died of cancer Dec. 25, 2015. She was 31.

When she died, Duppong was the director of adult faith formation for the diocese. Before that, she was a missionary for six years with the Fellowship of Catholic University Students, or FOCUS. In her position, the diocese said, she used “her missionary zeal to bring others closer to Christ.”

Mother Murphy in 1893 founded the Sisters of the Holy Spirit and Mary Immaculate, the first order of women religious in the state of Texas. The congregation was started after Mother Murphy, a native of Ireland, spent years helping the poor and serving African Americans and Mexican Americans as a laywoman. She died in 1907 at age 74.

Bishops to pray and reflect on response to clergy sexual abuse

With 2022 being the 20th anniversary of the bishops’ adoption of the “Charter for the Protection of Children and Young People,” the bishops also plan to spend time in prayer and reflection on their response to clergy sexual abuse during the general assembly.

The document established minimum standards for each diocese to follow as they reviewed abuse allegations.

Agenda for the assembly

The agenda for the assembly also includes:

— Review and approval of the USCCB budget for 2023.

— A report on progress on implementing the document “The Mystery of the Eucharist in the Life of the Church,” activities under the nationwide eucharistic revival initiative, and the planned 2024 National Eucharistic Congress in Indianapolis.

— An update on the Synod of Bishops on synodality as the global process initiated by Pope Francis enters the continental phase.

— A report from the Secretariat for Cultural Diversity in the Church on the “Journeying Together” gathering held this past July in Chicago.

— A review of the church’s response to the war in Ukraine.

— A report from Bishop Burbidge on the work of the National Catholic Partnership on Disability.

Tags: Election News, USCCB
Copyright © 2022 Catholic Courier, Inc. All rights reserved. Linking is encouraged, but republishing or redistributing, including by framing or similar means, without the publisher's prior written permission is prohibited.