Elijah flees to the mountain and speaks to God - Catholic Courier 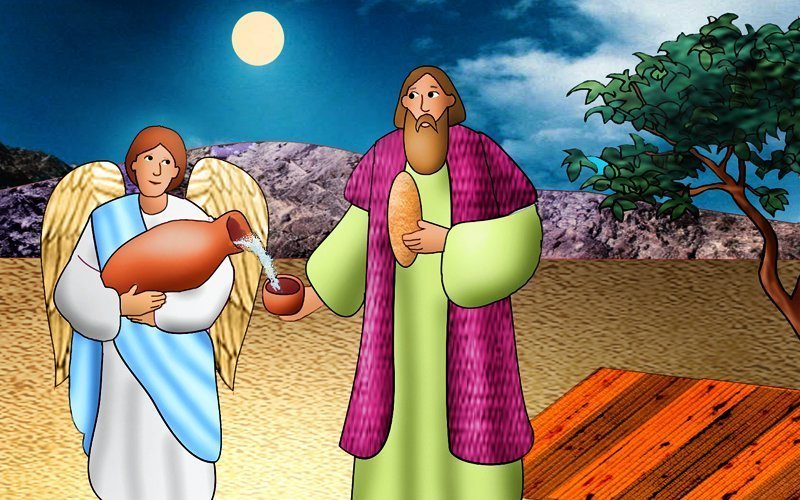 Elijah flees to the mountain and speaks to God

Bible Accent: Elijah and the widow

Elijah flees to the mountain and speaks to God

God was upset about the evil ways of King Ahab of Israel. Ahab had married the Sidonian princess Jezebel and began to worship her false god, Baal.

One day, God called on his prophet, Elijah, to tell Ahab that there would be no dew or rain in the land except at Elijah’s word.

Drought and famine spread through the land for three years. During this time, Elijah was in hiding and Jezebel put the other prophets of God to death.

In the third year, God told Elijah to return to Ahab and end the drought.

Elijah told Ahab to bring all of Israel to Mount Carmel along with the prophets of Baal and another false god, Asherah.

Elijah told the prophets of Baal to call on their false god and wait for an answer, which never came.

Then Elijah called on the name of God.

“Answer me, Lord! Answer me, that this people may know that you, Lord, are God and that you have turned their hearts back to you,” Elijah cried.

The fire of God came down and consumed an offering that Elijah had placed on an altar. The people of Israel fell to the ground and began to worship God.

Then, at Elijah’s command, they seized the false prophets, whom Elijah put to death.

Not long after, a heavy rain began to fall.

Ahab returned to Jezebel and told her all that had happened. She was so angry about the prophets that she threatened to do the same thing to Elijah.

Elijah was very frightened. He fled to Beer-sheba of Judah, then traveled into the wilderness for a day. When he came upon a lone broom tree, he sat beside it and prayed for death.

“This is enough, O Lord! Take my life, for I am no better than my fathers,” he said, feeling very sorry for himself.

Elijah fell asleep and was awoken by an angel, who told him to eat and drink so he would be strong enough to travel 40 days and 40 nights to Horeb, the mountain of God.

When he reached Horeb, Elijah took shelter in a cave. When God came to talk to him, Elijah said that he was frightened for his life and also complained about the unfaithful people of Israel.

God gave Elijah a new mission and reassured him that all would be well. God told him to go back and anoint Jehu as the new king of Israel. He also said that Elijah would have a new helper, Elisha, who would eventually succeed him as a prophet.

1. What message did Elijah deliver to Ahab?

2. What was the name of the mountain of God?

Bible Accent:Elijah and the widow

When God asked Elijah to deliver his messages, he always made sure the prophet was safe and taken care of.

For example, in 1 Kings 17:2-14, after Elijah told King Ahab about the coming drought, God had Elijah hide from the king in the Wadi Cherith. God commanded the ravens to bring Elijah bread and meat so he would not go hungry.

When the wadi dried up, God spoke to Elijah.

“Arise, go to Zarephath of Sidon and stay there. I have commanded a widow there to feed you,” he said.

When Elijah went to Zarephath, he met a widow at the city’s entrance.

Elijah called out to her for a cup of water. When she went to get him one, he also asked for a crust of bread.

“As the Lord, your God, lives, I have nothing baked; there is only a handful of flour in my jar and a little oil in my jug. Just now I was collecting a few sticks, to go in and prepare something for myself and my son; when we have eaten it, we shall die,” she said.

Elijah told her not to be afraid and that God said her flour and oil would not run out until the drought was over.

The widow did as Elijah said, and her flour and oil never ran out.

God not only had kept Elijah safe and fed during the drought, but he also fed the widow and her entire household.

Louis was born in 1214 and became King Louis IX of France in 1226. He was well-liked by his subjects for being pious and good.

He took part in two Crusades to the Holy Land. During his first one, he and his men were taken prisoner in Egypt in 1250. Louis secured everyone’s freedom by paying a large ransom and returning a city he had captured.

He again decided to join a Crusade in 1270, but he died of dysentery in Tunisia.

Unscramble the words and arrange them to form a quotation from the children’s story. (Answer at the bottom)

The essay question for August 2018 is: How do you seek reassurance from God through prayer?

All entries of 100 words or less must be received by the Catholic Courier no later than 4:30 p.m. on Aug. 15, 2018, to be considered for this contest. The winner, whose essay will be published in an upcoming print and online edition of Kids’ Chronicle, will be notified by phone.

Answer: no better am than my fathers I

I am no better than my fathers.