Elijah is taken to heaven in a whirlwind - Catholic Courier 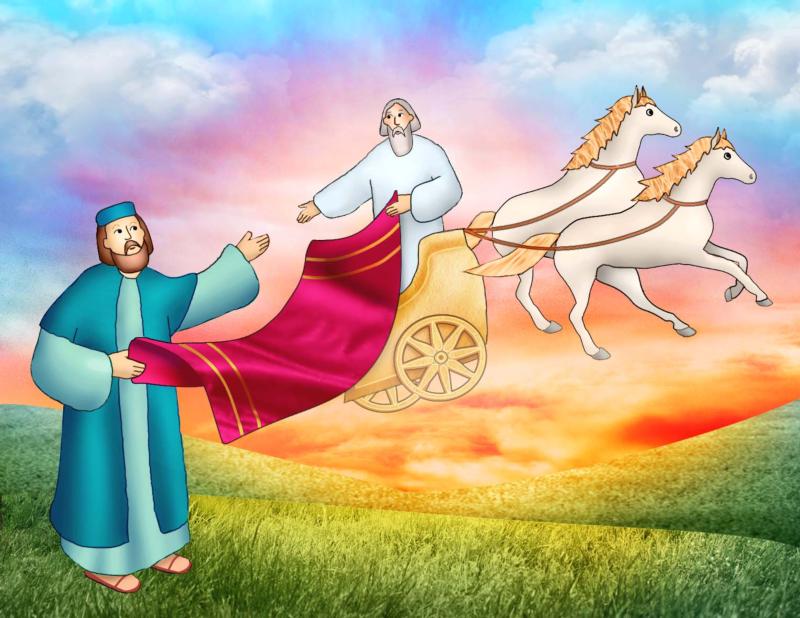 This is the artwork for Kids' Chronicle for June 17, 2020. (Illustration by Linda Rivers)

Elijah is taken to heaven in a whirlwind

It was almost time for God to take his prophet, Elijah, to heaven.

Just before that happened, Elijah and the man who would replace him, Elisha, were walking from Gilgal.

“Please stay here; the Lord has sent me on to the Jordan,” Elijah told his companion.

“As the Lord lives, and as you yourself live, I will not leave you,” Elisha replied.

The two men continued on together, with 50 of the guild prophets following them at a distance.

When they reached the Jordan, Elijah rolled up his mantle. He struck the water, which parted so he and Elisha could walk on dry land.

“Ask for whatever I may do for you, before I am taken from you,” Elijah said. Elisha said that he wished to receive a double portion of Elijah’s spirit.

“You have asked something that is not easy,” Elijah said. “Still, if you see me taken up from you, your wish will be granted; otherwise not.”

As the two men continued to talk, a flaming chariot and flaming horses came between them. Elijah went up to heaven in a whirlwind.

“My father! My father! Israel’s chariots and drivers!” Elisha cried out.

Elisha picked up Elijah’s mantle that had fallen from him and returned to the bank of the Jordan. He struck the water with the mantle and said, “Where is the Lord, the God of Elijah?”

The water divided, and Elisha crossed over.

The guild prophets in Jericho, who were on the other side, saw Elisha and said, “The spirit of Elijah rests on Elisha.”

They went to meet him, bowing to the ground before him.

“Among your servants are 50 brave men,” they said. “Let them go in search of your master. Perhaps the spirit of the Lord has lifted him up and left him on some mountain or in some valley.”

“Do not send them,” Elisha said.

Since they kept urging him until he was embarrassed, Elisha finally told them to go ahead with the search even though he knew it would be fruitless.

The 50 men searched for three days without finding Elijah, because God had taken the prophet to heaven.

1. Who was to replace Elijah as God’s prophet?

2. How was Elijah taken to heaven?

ESSAY: Describe how you would have reacted if you had witnessed Elijah being taken to heaven.

How did God’s choice of Elisha as prophet come about?

In 1 Kings 19, we read that King Ahab’s wife, Jezebel, planned to kill Elijah.

Elijah fled to Judah then went a day’s journey into the wilderness. He prayed for death before falling asleep.

An angel awoke Elijah to give him food and drink to prepare him to walk 40 days and nights to Horeb, the mountain of God.

When Elijah arrived, he told God that he feared for his life.

“Go back!” God said. “Take the desert road to Damascus. When you arrive, you shall anoint Hazael as king of Aram. You shall also anoint Jehu, son of Nimshi, as king of Israel, and Elisha, son of Shaphat of Abel-meholah, as prophet to succeed you.”

Elijah set out. He came upon Elisha, who was plowing with a yoke of 12 oxen. Elijah threw his cloak around Elisha, a gesture that meant Elijah wanted Elisha to follow and serve him.

Elisha slaughtered the oxen and used the plow as fuel for a fire to cook the meat. He gave it to the people to eat, and then he left to follow Elijah.

Oliver Plunkett was born in Ireland in 1625. After being ordained a priest in Rome in 1654, he taught and reviewed books for the Sacred Congregation of the Index.

In 1669, he was named archbishop of Armagh and primate of Ireland. For 10 years, he organized synods, visited dioceses, opened schools and confirmed thousands.

Persecution of Catholics by the English forced him into hiding in 1679. Late that year, he was arrested while visiting his dying cousin in Dublin. He was put in prison on false charges of treason and was executed in London in 1681.

We remember him on July 1.

Using the hints provided, put a T next to the sentences about Elijah that are true and an F next to the ones that are false.