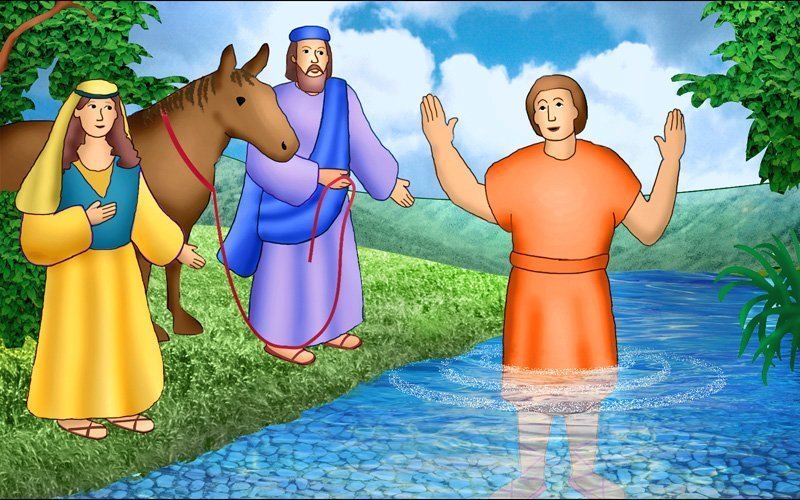 A gentile man named Naaman was commander of the king of Aram’s army. He was very successful in his raids on Israel, which pleased the king very much.

Since the Israelites did not always follow God, sometimes God allowed their enemies to be victorious against them. That is why Naaman was so successful.

Even though Naaman was powerful and victorious, he had one problem: He was a leper.

During one of the raids on Israel, a little girl was captured and became a servant to Naaman’s wife. When the girl saw Naaman’s leprosy, she told her mistress about the prophet Elisha.

“If only my master would present himself to the prophet in Samaria!” the little girl said to Naaman’s wife. “He would cure him of his leprosy.”

Naaman desperately wanted to be cured. He told the king of Aram what the girl had said. So the king gave Naaman money, garments and a letter to present to the king of Israel.

“With this letter I am sending my servant Naaman to you, that you may cure him of his leprosy,” the king wrote.

When the king of Israel read the letter Naaman handed him, he became very upset. He thought the king of Aram was trying to pick a fight with him.

When Elisha heard this, he told the king to send Naaman to him.

Naaman drove his horses and chariot to Elisha’s house.

Elisha did not come out to greet Naaman. Instead, he sent Naaman a message, instructing him to wash in the Jordan River seven times to be healed.

Naaman was furious. He had expected Elisha to treat him like a very important person and perform a special healing ritual over him. He wasn’t going to do something as simple as bathing, he thought.

He left Elisha’s house in a huff.

But his servants reasoned with him and got him to do as Elisha had said.

Naaman plunged himself into the Jordan. After the seventh time, his leprosy was gone.

Naaman returned to Elisha a little more humble than when he had left.

“Now I know that there is no God in all the earth, except in Israel,” he said to Elisha.

From that day on, Naaman worshipped only God.

1. Who needed to be cured of leprosy?
2. What cure did Elisha prescribe?

ESSAY:
When have you prayed for healing?

Leprosy — now known as Hansen’s disease — is a contagious skin disease that was common in biblical times. We read in the Bible that Jesus would heal people afflicted with the condition.

For example, in Luke 17:11-19, we read that Jesus was traveling through Samaria and Galilee as he continued his journey to Jerusalem.

Ten lepers met him as he was entering one particular village.

From a distance, they called out to Jesus.

“Jesus, master! Have pity on us!” they cried.

Jesus saw them and responded.

“Go show yourselves to the priests,” he said, and they were cleansed of leprosy on their way.

One of the lepers, a Samaritan man, realized he had been healed. He returned to Jesus, glorified God in a loud voice, and fell at Jesus’ feet in thanks.

“Ten were cleansed, were they not? Where are the other nine? Has none but this foreigner returned to give thanks to God?” Jesus asked.

Jesus looked at the Samaritan.

“Stand up and go; your faith has saved you,” Jesus said.

St. John of Capistrano was born in Italy in 1386. He studied law and married a woman from an important family in Perugia, Italy, and in 1412 became the city’s governor.

He was imprisoned during a civil war and during that time, he had a vision of St. Francis. He experienced a spiritual conversion, was dispensed from his marriage vows, joined the Friars Minor in 1416 and was ordained in 1420.

John became a great preacher. He also worked to reform his order and served as the friars’ vicar general. In 1456, he led a wing of the Christian army in a successful battle against the Turks, who had besieged Belgrade.

Using the hints provided, draw a line between the miracle Elisha performed with God’s help and the person(s) who received the miracle.