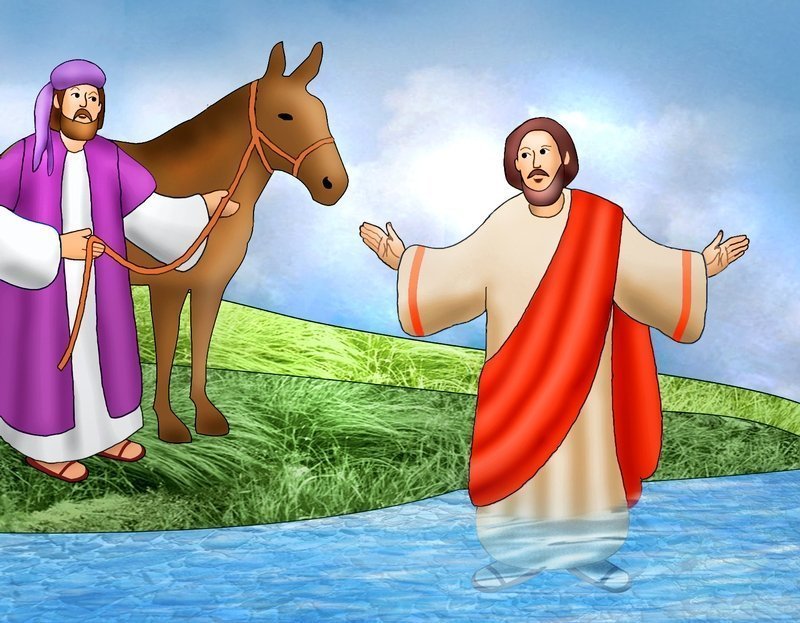 Elisha cures Naaman of his leprosy

Elisha cures Naaman of his leprosy

A gentile man named Naaman was commander of the king of Aram’s army. He was very successful in his raids on Israel, which pleased the king very much.

Since the Israelites did not always follow God, sometimes God allowed their enemies to be victorious against them. That is why Naaman was so successful.

Even though Naaman was powerful and victorious, he had one problem.

He was a leper.

During one of the raids on Israel, a little girl was captured and became a servant to Naaman’s wife. When the girl saw Naaman’s leprosy, she told her mistress about the prophet Elisha.

“If only my master would present himself to the prophet in Samaria!” the little girl said to Naaman’s wife. “He would cure him of his leprosy.”

Naaman desperately wanted to be cured. He told the king of Aram what the girl had said. So the king gave Naaman money, garments and a letter to present to the king of Israel.

“With this letter I am sending my servant Naaman to you, that you may cure him of his leprosy,” the king wrote.

When the king of Israel read the letter Naaman handed him, he became very upset. He thought the king of Aram was trying to pick a fight with him.

When Elisha heard this, he told the king to send Naaman to him.

Naaman drove his horses and chariot to Elisha’s house.

Elisha did not come out to greet Naaman. Instead, he sent Naaman a message, instructing him to wash in the Jordan River seven times in order to be healed.

Naaman was furious. He had expected Elisha to treat him like a very important person and perform a special healing ritual over him. He wasn’t going to do something as simple as bathing, he thought.

He left Elisha’s house in a huff.

But his servants reasoned with him and got him to do as Elisha had said.

Naaman plunged himself into the Jordan. After the seventh time, his leprosy was gone.

Naaman returned to Elisha a little more humble than when he had left.

“Now I know that there is no God in all the earth, except in Israel,” he said to Elisha.

From that day on, Naaman worshipped only God.

1. Who needed to be cured of leprosy?

2. What cure did Elisha prescribe?

In the New Testament, there are stories that tell of gentile military officers having faith in God.

For example, in Matthew 8, Jesus and the apostles traveled to Capernaum. A Roman centurion there had a servant who was dying. The centurion asked Jesus to heal the servant without coming to his house.

“Lord, I am not worthy to have you enter under my roof; only say the word and my servant will be healed,” he said.

Jesus was amazed by the man’s faith.

“You may go; as you have believed, let it be done for you,” Jesus told him.

In Acts 10, Cornelius, a Roman centurion in Caesarea, prayed to God and gave alms to the Jewish poor. One day, he had a vision. An angel told him to find Peter, who was visiting Joppa.

Cornelius sent three friends to the house where Peter was staying. As they neared the house, the Holy Spirit told Peter to go with the men. It was unlawful for a Jew to associate with a gentile. But earlier that day, Peter also had a vision, in which he learned it was OK to bring God’s word to the gentiles.

When Peter arrived at Cornelius’ house, he preached about God and Jesus to the many people Cornelius had invited.

As Peter spoke, the Holy Spirit came upon the gentiles. Afterward, they were baptized.

St. Ignatius became the bishop of Antioch, Syria, in the year 69.

The Roman emperor sentenced him to death for refusing to deny his faith.

A group of soldiers escorted him to Rome. During the long journey, he wrote several letters to encourage the Christians living in the towns where they made stops.

When he arrived in Rome, he was sent to the Colosseum, where he was attacked and killed by two lions that were released into the amphitheater with him.