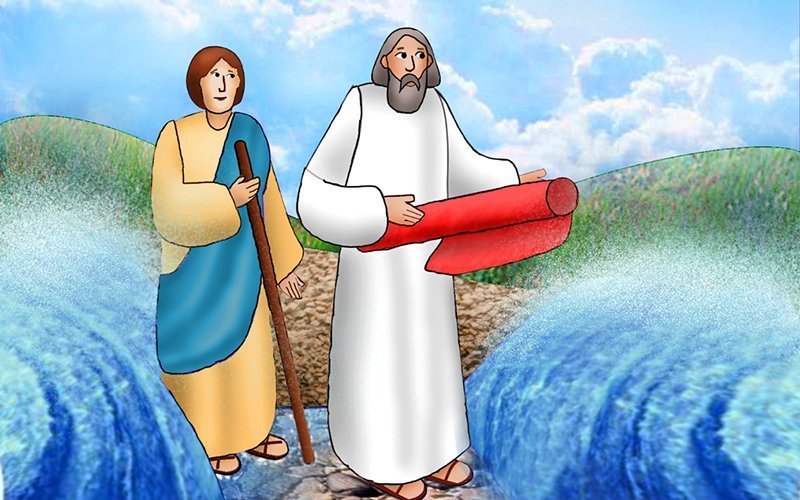 Elisha was with the prophet Elijah, who also served as his teacher. They had reached the banks of the Jordan River. Elijah removed his sleeveless overcoat, called a mantle, rolled it up and touched the water with it. The water immediately parted and the two men crossed the river bed on dry land.

When they reached the other side, Elijah said, “Ask for whatever I may do for you, before I am taken from you.”

Elisha replied, “May I receive a double potion of your spirit.” Elijah placed his hands on his student’s shoulders and looked into his eyes.

“You have asked something that is not easy. Still, if you see me taken up from you, your wish will be granted; otherwise not.” While the two men were talking, a powerful wind roared toward them and a flaming chariot with horses pulled up along side of them. Elijah climbed into the chariot and the driver delivered him up to heaven in a whirlwind.

Elisha looked down by his feet and saw Elijah’s mantle. He did as Elijah had done. He touched the water of the Jordan River and it parted again so he was able to cross back on dry land. There were men by the water who had seen what had happened. One of them said, “The spirit of Elijah rests on Elisha.”

From that moment, God used Elisha in ways he had never experienced before. A widow came before Elisha, asking for his help. Here husband died, leaving her with debt that the creditor wanted paid.

“Tell me what you have in the house,” said Elisha.

“This servant of yours has nothing in the house but a jug of oil.” Elisha told her to gather as many jugs as she could. From the one jug of oil, Elisha filled all the others.

“Go and sell the oil to pay off your creditor,” Elisha said to the woman. “With what remains, you and your children can live.”

A man from Baal-shalishah brought an offering of 20 barley loaves. “Give it to the people to eat,” Elisha told him.

The man looked around. “How can I set this before a hundred men?” “Give it to the people to eat,” Elisha repeated. “For thus says the Lord, ‘They shall eat and there shall be some left over.’” And there was.

Q&A
1. How did Elisha cross the Jordan River safely?
2. How many people were fed by the 20 loaves of barley?

The Old Testament’s first five books, called the Pentateuch, tell about the creation of the world, the lives of the earliest men and women of faith, and God’s promises and commandments.

Next, the historical books tell stories that took place over a period of almost 800 years, beginning with the possession of the promised land through the time the Israelites were exiled in captivity until they returned to their homeland.

Job, Proverbs and Ecclesiastes are considered books of wisdom, while Psalms, Song of Solomon and Lamentations are books of poetry.

The remaining section of the Old Testament contains books of prophecy. There are the three major prophets, Isaiah, Jeremiah and Ezekiel, who wrote long books, and the minor prophets, who have shorter books named after them.

Cesare de Rossi was born in Italy in 1559 and changed his name to Laurence when he joined a Capuchin Franciscan monastery at the age of 16. He had studied under Conventual Franciscans before then, and he continued to study philosophy and theology at the University of Padua. He excelled in languages and had memorized many passages of the Bible. Laurence served as the definitor general of his order in Rome and was later promoted to minister general. Emperor Rudolf II asked him to speak to the German princes and ask their help fighting the Turks in Hungary. The Germans agreed, and the combined armies drove the Turks away. Laurence rode with the army carrying no weapon, only a crucifix. Laurence founded a Capuchin monastery in Spain and continued to teach and preach in Germany before his death in 1619. We remember him on July 21.