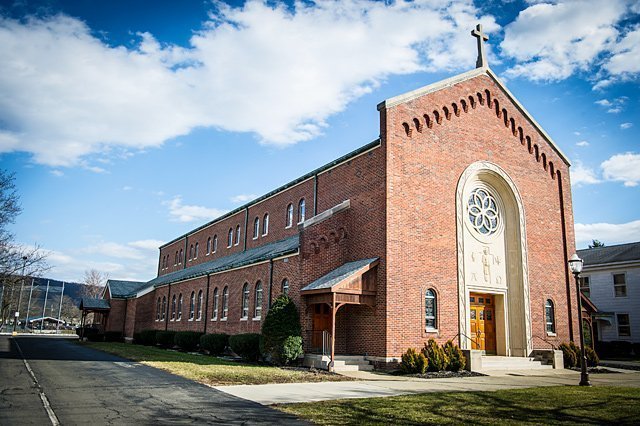 Under the new arrangement, Elmira’s St. Charles Borromeo will have no weekend liturgies.

The affected parishes are Christ the Redeemer, which comprises Our Lady of Lourdes, St. Casimir and St. Charles Borromeo churches; Blessed Sacrament, which comprises St. Patrick and Ss. Peter and Paul churches; and St. Mary Southside.

In a clustering, a single pastoral leader oversees multiple parishes that maintain separate staffs, finances and parish pastoral councils. The newly formed Elmira cluster will be staffed by a pastor and one parochial vicar assisted by senior priests. The cluster’s clergy will include all three of the parishes’ current pastors, who are set to take on new roles effective June 27 based on appointments made by Bishop Salvatore R. Matano:

* Father Scott Kubinski, pastor of Christ the Redeemer since 2010, will become pastor of the entire cluster.

* Father John DeSocio, pastor of St. Mary since 2009, has reached senior-priest status. He will continue to reside in Elmira and plans to provide sacramental assistance at area churches.

Under the new arrangement, there will be one fewer full-time priest serving Elmira’s churches. The weekend Mass schedule will be reduced to seven Masses from a combined total of 10 liturgies. Two will take place at St. Mary, two at St. Patrick, and one each at Our Lady of Lourdes, Ss. Peter and Paul and St. Casimir.

The new schedule calls for a reduction by one weekend Mass each at St. Mary and Ss. Peter and Paul, as well as at St. Charles Borromeo — which, for the first time, will have no weekend liturgies at all. St. Charles Borromeo’s properties are currently up for sale but for the time being will remain available for funerals, weddings and events in the church hall.

Fewer weekday Masses also will be celebrated among the six churches, although the exact schedule has not yet been determined.

According to Karen Rinefierd and Thomas Kubus, planning specialists in the diocesan Office of Pastoral Resources and Planning, the cluster is expected to become a single parish in about a year’s time, pending final approval by Bishop Matano. At that point, all parish staffs, finances and councils would be combined, and a new parish name would be selected. However, each church building would retain its original name.

Rinefierd and Kubus noted that the decision to cluster Elmira’s parishes at this time arose from meetings and surveys involving parish leaders, staff members, finance and pastoral councils, and other parishioners from all the affected churches. Rinefierd and Kubus added that a planning team — formed from these groups — made a formal proposal for clustering in January 2017, and the proposal was approved shortly thereafter by Bishop Matano.

The changes in Chemung County are outgrowths of pastoral planning, which began in the Diocese of Rochester in the late 1990s. Through this process, which emphasizes local as well as diocesan input, adjustments are made among groups of faith communities based on such factors as priest availability, staffing, finances and Mass attendance.

In Elmira, Father DeSocio’s impending move to senior-priest status combined with shrinking Mass attendance were prime factors in reducing the Mass schedule. A March 19, 2017, article in the parishes’ combined bulletin noted that between 2012 and 2016, the average total weekend Mass attendance in Elmira’s six churches dropped from 2,404 to 2,019 — a decline of 16 percent in four years’ time. Kubus said this decline in Mass attendance is consistent with decreases in the diocese as a whole.

Although necessary, Rinefierd acknowledged that the transitions in Elmira are difficult for all involved.

“It’s all the mixes of emotions that you would expect of people when there’s change, which is hard for all of us,” she remarked.

On the positive side, Rinefierd said parishioners are taking decisive roles in determining how their parishes can be strengthened and sustained.

“People are willing and being proactive in making decisions that will allow the best ministries to continue,” she said. “The people of Elmira are extraordinarily faith-filled and committed to their churches.”

Kubus observed that Elmira’s churches are no strangers to parish reconfiguration, having experienced multiple reorganizations over the past two decades.

“They are probably better prepared for (change) than most places, mainly because they’ve been through it more,” he said.