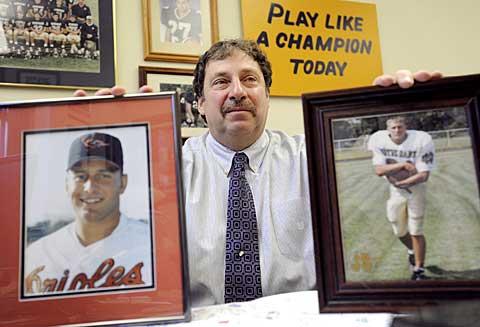 A book title bearing his name and labeling him a hero is perhaps the last thing that Joel Stephens — who was as humble as he was athletically gifted — would have wanted.

On the other hand, Stephens’ 22 years on earth were so remarkable that Mike D’Aloisio felt compelled to keep his memory fresh by spreading a message of inspiration.

"Joel would be upset with me writing this book. He would be shy and embarrassed," D’Aloisio said. "But I think he would feel that if it helped somebody get through a difficult time, he could live with that."

5 C Hero: The Joel Stephens Story, released in early December 2009, is a deeply personal rendering of one of the greatest athletes ever to play in Elmira. The five 5 "C’s" stand for the Christianity, courage, compassion, character and commitment that Stephens displayed during his short life — one that ended on Sept. 30, 1998, after a nearly one-year battle with colon cancer.

The book serves up story after story of Stephens’ behind-the-scenes goodness, unshakable faith in God and exemplary lifestyle — qualities that only accelerated during his illness. D’Aloisio said 5 C Hero began as a football book, but evolved into a saga of his close relationship with a young man whom D’Aloisio considers the son he and his wife, Jayne, never had.

D’Aloisio, 59, has worked at Notre Dame since 1977 and is currently its assistant principal and head football coach with nearly 200 career wins, four sectional titles and a state crown in 1990. He also is the Crusaders’ former head boys’ basketball coach, with three sectional titles and 250-plus wins to his credit.

He knew Stephens for eight years, beginning when the Tioga, Pa., resident arrived at Notre Dame as a freshman football player. The running back with uniform No. 24 shattered school and local running records, finishing as New York state’s third all-time leading rusher with 4,715 career yards, and also excelled for the Crusaders in basketball and baseball.

However, according to D’Aloisio, Stephens refused to let success go to his head. He didn’t stand for gossiping or bullying; didn’t drink, smoke or swear. He was open about his Christian beliefs and very even-tempered: "He’d never be angry. He’d be very intense, which is different."

Upon his 1995 graduation Stephens opted for a professional baseball career, playing two years in the Baltimore Orioles organization. In 1997 he decided to switch gears and accept a full football scholarship offer from Syracuse University.

But right about that time, his illness was first detected. At 6 feet, 2 inches and 235 pounds, he appeared in tremendous physical condition, but he would steadily decline from that point on.

In the book D’Aloisio details how Stephens, even in his final months, told people he was blessed to have cancer so he could be even more of an inspirational example than he was as a star athlete. Always one who would willingly sign autographs after games and go out of his way for the sick and handicapped, Stephens befriended many young cancer patients while enduring his own health crisis.

"He did it at a time when he had the worst news possible, and that’s when someone’s true character comes out," D’Aloisio said. "’Hero’ is not a term that I lightly toss around. He taught us how to be strong in our faith and how to treat other people, and to me that’s what being a hero is too."

5 C Hero draws several parallels to another fallen Elmira athlete, Ernie Davis, who once lived in the same Elmira neighborhood as D’Aloisio. The Heisman Trophy-winning football star from Syracuse University died of leukemia in 1963 at age 23.

"They were two people who transcended athletics, ethnic groups, religions," D’Aloisio said of Stephens and Davis.

Though Stephens was not Catholic, D’Aloisio emphasized that he led by Christian example and was fond of Bible quotes; one of his favorites was Philippians 4:13: "I can do all things through Christ who strengthens me."

"I say, ‘WWJD‘ — what would Jesus do — and find myself asking, ‘What would Joel do?’ He was almost a holy person," D’Aloisio remarked, adding that more than one person has told him of a spiritual experience at which they could sense Stephens’ presence.

D’Aloisio has released his debut book through Authorhouse, a self-publishing company. He was assisted by Tony Pucci, a Notre Dame English teacher, but the text is essentially his creation. He said he had sought to do a book ever since Stephens died, based on a commitment to "continue to tell his story and keep his legacy alive."

5 C Hero serves as an addition to several local events and monuments that have been instituted in Stephens’ honor. D’Aloisio reported that he’s pleased with sales of the book thus far, noting that there’s even talk of making it into a movie.

"People say once they start reading it, they can’t put it down. Other people say they have to put it down because they can’t hold back the tears. Others have said it makes you realize what is truly valuable and important in one’s life," D’Aloisio said. "It makes me feel good to hear that, because Joel was such an amazing person and his story really needed to be told."

EDITOR’S NOTE: For information on purchasing 5 C Hero: The Joel Stephens Story, visit www.authorhouse.com and search for the book’s title. Or, contact Mike D’Aloisio at notredame24@hotmail.com.