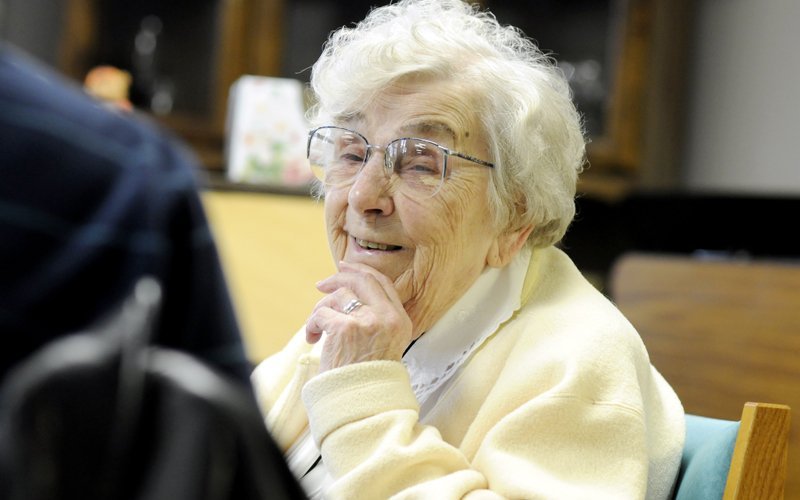 Sister Mary Carmella Coene celebrates her 100th birthday this month. Above, she sits at the Sisters of Mercy Motherhouse in Brighton Nov. 3

BRIGHTON — She’s a legendary science and math educator. But listen to Sister Mary Carmella Coene, RSM, spin stories about her nearly 100 years on earth, and you might well think her specialty is history.

How far back does Sister Coene go? Well, she still remembers toiling on her family’s farm when news came that the war had ended — World War I.

A few years later, in December 1926, she entered the Sisters of Mercy. At that point she found that she’d be leaving her native town of Greece in suburban Rochester, going off to Chemung County to teach.

“I had no idea where Elmira was,” she chuckled during an early November interview, adding that she’d thought it was only a few streets away.

Her decision to pursue a religious vocation stemmed, in part, from a promise she had made when her mother had pneumonia.

“She was very sick, and I was concerned. I sort of talked to the Lord — ‘If she gets better, I’m going to be a sister,'” Sister Coene said, adding that her mom’s health did improve. “That was, I think, sort of a call.”

At the tender age of 18, having not yet completed high school and with only a few weeks of training, she took over a third-grade classroom at the former St. Patrick School in Elmira. Her beginnings as an educator actually predated the start of the Great Depression.

“All these youngsters today have no idea what the Depression was like. We had people coming to the back door of the convent with no shoes, asking for some food,” she recalled.

But when Elmira Notre Dame High School opened in 1955, her traveling days were over. Her affiliation with the Southern Tier’s only Catholic high school has extended more than a half-century, which would be about half her life: Sister Coene will turn 100 on Dec. 21.

Sister Coene is well-known for her frequent smiles and engaging wit — that is, when class is not in session. Otherwise she’s been all business, setting the bar high for students and always making herself available for extra help. Her dedication paid off: In a 2003 feature on the longtime educator, Sister Mary Walter Hickey, principal of Notre Dame, said exam scores of Sister Coene’s students were consistently so high they were “off the wall.”

Along with science and math, Sister Coene has taught such courses as typing and bookkeeping. She carried a full-time teaching load until 1998, and continued tutoring for many years afterward.

“We formed a lot of relationships. You didn’t care to move,” Sister Coene said, noting that she enjoyed working with all kinds of students: “It’s varied with their attitudes and desires. You have very, very good students, and some who should care a lot more about what they’re doing.” After a pause she added, “I miss them.”

In 2006 Sister Coene moved to the Sisters of Mercy Motherhouse. However, she returned to Elmira Oct. 21 to receive Notre Dame’s annual McAuley Award for outstanding service, with numerous well-wishers in attendance. She keeps touch with former students going all the way back to her St. Patrick days, as well as from Notre Dame’s early years — “a lot of friends, a lot of friends,” she said.

Another memorable moment occurred a few years ago when, during a party noting Sister Coene’s 75 years in education, Sister Hickey announced that a new science wing would be named in her honor.

“I didn’t believe it at first, thinking she was just talking. I’ve since found out she wasn’t talking,” the soon-to-be-centenarian quipped. Indeed, the completed Sister Mary Carmella Coene Science Wing was dedicated in 2005 by Bishop Matthew H. Clark.

The spotlight will shine on Sister Coene yet again when she returns to Notre Dame on Dec. 18 for a 100th-birthday party from 4 to 6 p.m. Among the planned activities are proclamations from various dignitaries as well as a DVD presentation of short stories, memories and birthday wishes. All alumni and friends of Sister Coene are invited. A birthday celebration for her will be held at the Brighton motherhouse as well.

Sister Coene remarked that she has had “a few little problems” with her health but otherwise is doing fine: “I don’t feel to be 100.”

It’s impossible to measure how many lives she has positively influenced over some 80 years, but one can say with certainty that Sister Coene has lived out her vocation to perfection. When a visitor noted that God has been good to her, she responded quickly: