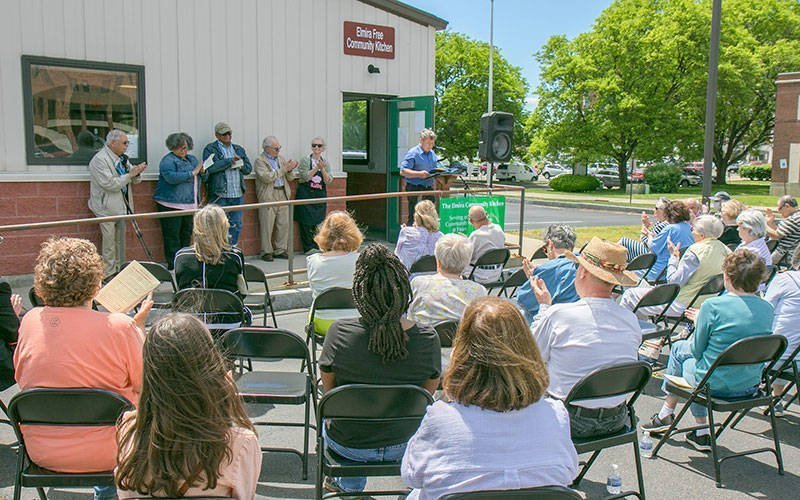 Having served countless meals over a 40-year period, Elmira Community Kitchen remains steadfast in its mission to feed folks in need.

The facility’s vital service to its Chemung County city was celebrated May 27 with a ceremony in the kitchen’s parking lot at 160 High St. More than 50 volunteers, staff, board members and city officials attended, and Mayor Dan Mandell issued a proclamation declaring that day as Elmira Community Kitchen Day. Father Scott Kubinski, pastor of Elmira’s Most Holy Name of Jesus Parish, closed the program with a blessing. Other speakers included Kathy Dubel, kitchen coordinator for the past 27 years; Nancy Koons, executive director for Catholic Charities of Chemung/Schuyler; and volunteers Tony Ciccariello (Happy Servers Team), Denise and Willie Jackson (Word of Faith Church), Gil Sweet (Twin Tiers Jewish Community) and Jan Butts (The Park Church). Those in attendance were invited to take to-go lunches at the program’s conclusion.

It was back in 1981 that an ecumenical social-justice group of eight people — including Dubel — hatched the idea to create a free, regular communal meal open to all. The initiative launched in May of that year at the First Baptist Church near Wisner Park and became known as the Elmira Free Community Kitchen. It relocated that summer to the kitchen and dining area in the Ss. Peter and Paul school building on High Street, where the Southern Tier Office of Social Ministry (now Catholic Charities) was located as well, providing the opportunity for hot meals to social-ministry clients and/or folks living nearby on Elmira’s east side.

Over the next several years, more faith communities joined as kitchen volunteers. The meal schedule eventually grew to encompass each weekday, several holidays and the last Saturday of the month. In 2004, following the razing of the former school one year earlier, a new parish community center was built at Ss. Peter and Paul that included an updated kitchen and dining room to house Elmira Community Kitchen. After operating temporarily at Trinity Episcopal Church during construction, the kitchen served its first meal in the new facility on Martin Luther King Jr. Day in 2005.

Elmira Community Kitchen is operated by staff members of Catholic Charities of Chemung/Schuyler, where Dubel also serves as director of justice and peace. Efforts have been buoyed by 200 community volunteers from 26 local faith communities, civic groups, businesses, schools and organizations who prepare and serve meals. Many organizations also provide support through food and monetary donations.

Since the coronavirus pandemic emerged beginning in March 2020, the dining area has been closed and takeout meals have been served “to-go” style Monday through Friday at lunchtime. Relying on staff and a limited number of volunteers, 32,000 meals were served from the start of the pandemic through early June 2021. According to Katie Rhodes, development and marketing coordinator for Catholic Charities of Chemung/Schuyler, the dining room will eventually reopen and a full set of volunteers will return, but no date has been set yet.