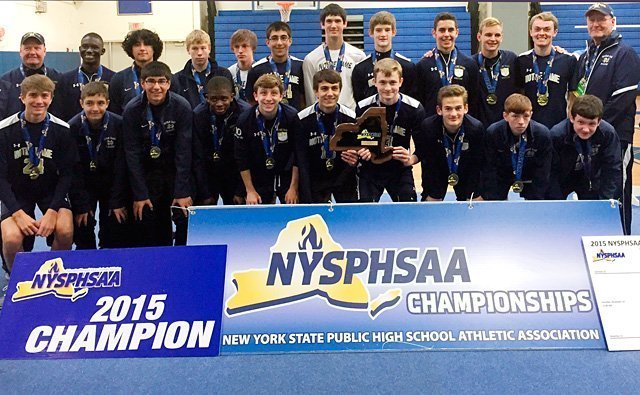 Sectional sports titles were in abundant supply for Catholic high schools in the diocese this fall — with Elmira Notre Dame boys’ soccer and McQuaid Jesuit boys’ volleyball going one better, finishing their seasons with state championships.

Notre Dame did the trick in dominant fashion, winning 9-1 over Solomon Schechter in the state Class C final Nov. 15. The victory ended a perfect season that saw the Crusaders win all 21 of their games, outscoring opponents an incredible 186-5 to set a state record for goals in a season while winning the program’s first state crown.

Six Crusaders scored in the state soccer final against Solomon Schechter of Section 1. Leading the way was Alec Cutler with two goals and four assists as he set a state record for assists in a season with 44. Rocco Coulibaly and Aidan Sharma had two goals each as well, and Michael Woglom, Brooks Glovins and Gavin Harrington added single goals.

In earlier state tournament games, ND won 5-0 over Thousand Islands of Section 3 in quarterfinal play Nov. 7 and 6-0 over Greenville of Section 2 in a semifinal Nov. 14 as Sharma scored twice in each game.

En route to its state title, top-seeded Notre Dame won 8-1 over No. 2 Lansing in the Section 4 Class C final Oct. 31. In earlier sectional games, the Crusaders won 8-0 over No. 9 Spencer-Van Etten in quarterfinal play Oct. 24, and 9-0 over No. 5 Trumansburg in a semifinal Oct. 28.

The Crusaders’ dominance this season saw them win all of their games by at least four goals.

The Knights brought an 18-1 record into the state Final Four and continued their dominating ways. First, they qualified for the final by capturing all six games in pool play Nov. 21, winning two games each over Sachem North of Section 11, Shenendahowa of Section 2 and Cicero-North Syracuse of Section 3.

Later on Nov. 21, McQuaid cruised to a 25-23, 25-13, 25-19 decision over Sachem North in the final. Erik Johnsson was named Division 1 Most Valuable Player, and McQuaid teammates Spencer Wickens, Joseph Crosby and Christopher Mahar made the all-tournament team as well.

Notre Dame’s road to the state soccer final began Nov. 7 with a 2-0 quarterfinal win over Section 3’s Sauquoit Valley on goals by Emma Booth and Camille VanderMeer. Then came a 2-0 semifinal victory over Schoharie of Section 2 Nov. 14 as Booth and Lauirel Vargas scored.

The state title game, held Nov. 15 against Port Jefferson of Section 11, saw Notre Dame endure a 3-1 defeat despite a goal from Vargas. ND finished with an 18-2 record.

In the Section 4 Class C final Oct. 30 against second-seeded Lansing, top-seeded ND scored a 4-1 win as Vargas scored twice and Mia Herlan and Maura Glovins had goals. ND had made the sectional final by winning 7-0 over No. 9 Sidney in quarterfinal play Oct. 23, and 2-0 over No. 4 Trumansburg in the semifinals Oct. 27.

McQuaid won its sectional title Nov. 7 by scoring 44 points, besting Fairport’s second-place total of 53 in Class A. The Knights’ Donny Glavin copped individual honors, placing first with a time of 15 minutes, 57 seconds to win by nearly a full minute. Glavin then placed third in the state Class A race Nov. 14.

* Notre Dame girls’ swimming placed third in Class A at the Section 4 meet Nov. 7 as Frances VanderMeer won individual titles in the 50- and 100-yard freestyle events, while Molly Craig captured the 200 individual medley and placed second in the 500 free. At the state meet Nov. 21, Craig took eighth in both the 200 IM and 500 free.

* Julia Andreach of Mercy won the Section 5 girls’ tennis state qualifier Oct. 24. She went on to reach the semifinals of the state tournament Oct. 31-Nov. 2.

* Aquinas cheerleading placed second in Division 2A for large schools at the Section 5 fall championships Oct. 31.