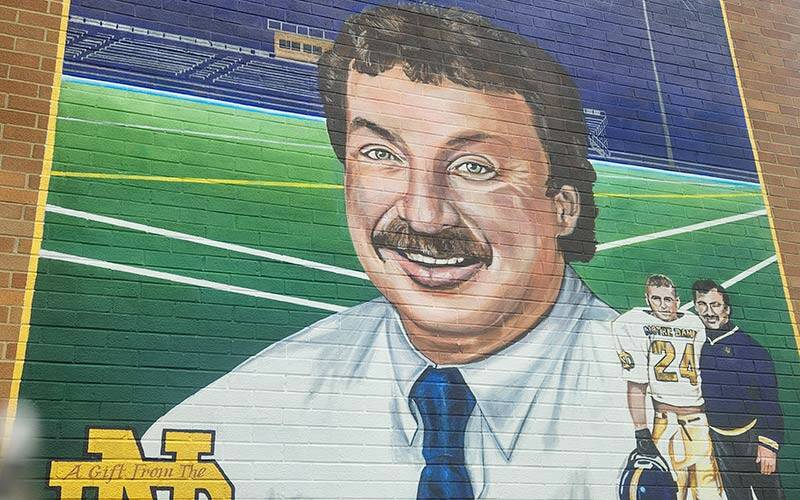 ELMIRA — A towering mural on Notre Dame High School’s exterior depicts a man larger than life — in both coaching circles and the world beyond.

Mike D’Aloisio, whose 43-year coaching tenure at Notre Dame included many years as a teacher and administrator, died May 22, 2022, at age 71 from amyotrophic lateral sclerosis, or ALS. The mural bearing his likeness, displayed across from Brewer Memorial Stadium, was dedicated this past Oct. 30.

D’Aloisio’s wife, Jayne, said the artwork will help to extend the legacy of a man who made a profound impact on many.

“My hope is that when new students come to Notre Dame and ask who that is on the mural,” she said, “a former student would respond that he was a great teacher, coach and mentor.”

Elmira Notre Dame coach was a friend to many

D’Aloisio, an Elmira native, arrived at Notre Dame in 1976 and served as a teacher, athletic director and assistant principal before retiring in 2014. He continued coaching until stepping down after the 2019 football season due to health issues.

He was the winningest high-school football coach in Elmira history, guiding the Crusaders to a record of 244-103 over 38 seasons with five Section 4 championships and two intersectional titles. D’Aloisio also compiled a 258-140 record in boys’ varsity basketball, with three sectional crowns, and a 43-17 mark in girls’ varsity basketball. In addition, he coached varsity golf to 72 consecutive dual-meet wins.

“Mike’s being able to get the most out of everyone (ability-wise) was incredible,” said Michael Johnston, a longtime administrator at Notre Dame with whom D’Aloisio coached football and basketball.

Yet what truly defined D’Aloisio’s success, according to those who knew him well, was the way he treated all people.

“He always went out of his way to befriend you — ‘How are you doing, how are your classes going,’” recalled Patricia Mack, Notre Dame’s current head of school and a 1985 Notre Dame graduate.

“That’s what separated him. It was wasn’t just about him, it was what could he do for others,” Johnston added.

One friend stands out in a special way — Joel Stephens, a 1995 Notre Dame graduate and one of the top athletes in Section 4 history, who died in 1998 of colon cancer at age 22. In 2009, D’Aloisio released a book, 5C Hero: The Joel Stephens Story, chronicling Stephens’ courage and faith as well as the close friendship he shared with D’Aloisio. An image of the pair, standing side by side, is included on the new mural at Notre Dame.

D’Aloisio himself ended up facing a debilitating illness when he was diagnosed with ALS in July 2020. Also known as Lou Gehrig’s Disease, ALS is a degenerative muscular illness for which there is no known cure.

Jayne D’Aloisio noted that her husband’s strong Catholic faith “never faltered” even when he was no longer able to attend Mass at their church, St. Patrick in Elmira. She gave special credit to the spiritual support of Jesuit Father Vincent McDonough, a retired Notre Dame teacher and close friend, who passed away Jan. 18, 2023.

“Faith can be a very difficult journey when ill or challenged,” she said. “Mike said Father McDonough was the reason he always saw the glass half full and always saw the light at the end of the tunnel.”

D’Aloisio continued working on a second book about Stephens as a follow-up to 5C Hero. Anthony Pucci, who coauthored the book, noted that a tribute section for D’Aloisio was added in light of his struggle with ALS. Twin Tiers Legends: Remembering Joel Stephens and Coach D was released in November 2022 and is available on amazon.com or by contacting Pucci at anthonyjpucci@gmail.com.

Pucci said his close friend was committed to completing Twin Tiers Legends even as his health worsened.

“I know how important this book was to him. We got as far as we could. Basically, I just told him that somehow we’ll finish it, somehow we’ll get it done,” said Pucci, a retired English teacher at Notre Dame.

Southern Tier coach had a ‘heart as big as Kansas’

Following D’Aloisio’s death in late May, a Mass celebrating his life took place June 1 at Notre Dame. The mural was dedicated five months later as a gift to the school from the Class of 2022. It was painted by Emily Firestine Solometo, a 1997 Notre Dame graduate, along with fellow local artists Crystal Townsend and Brandi Moffe. The dedication was followed by an announcement of the creation of Coach’s Corner, a park at Notre Dame honoring D’Aloisio and his players. Groundbreaking is expected to begin later in 2023.

All these gestures are well-deserved, according to Mack: “It’s super-important that they know what a legend he was here — who he was, what he did,” she said.

Jayne D’Aloisio said she’s glad the mural depicts her husband wearing a shirt and tie rather than his coaching gear, explaining that the image notes his positive influence on all Notre Dame students rather than just the athletes he coached.

“Although Mike cherished his sport memories, my most treasured memories were that of him in the classroom or school office,” she said. “He had a special way of making every student feel that they had purpose and were respected.”

“More than anything he did on the (football) field or (basketball) courts, he was just a tremendous human being. He had a heart as big as Kansas,” Pucci remarked. “I don’t know anyone who didn’t like him. He’s just one of a kind.”

Tags: Chemung County News
Copyright © 2023 Rochester Catholic Press Association, Inc. All rights reserved. Linking is encouraged, but republishing or redistributing, including by framing or similar means, without the publisher's prior written permission is prohibited.