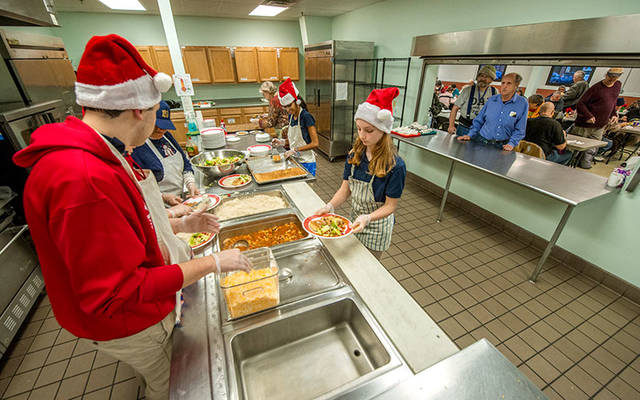 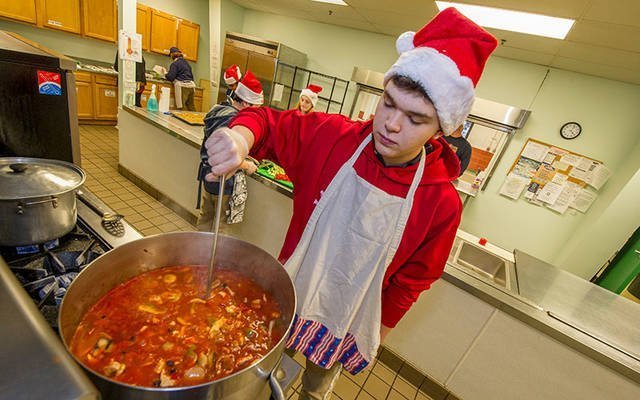 On the first Wednesday of each month, patrons of Elmira Community Kitchen can count on being served by young and cheerful volunteers.

This tradition, which extends back more than two decades, exists through the efforts of seventh- and eighth-graders at Notre Dame High School. Students, on their designated service day, take responsibility for planning the dinner menu; shopping for ingredients; preparing and serving the meals; and mingling with crowds of up to 100. In addition, the youths and their families raise funds and make their own contributions toward food costs, maintaining their monthly commitment right through the summer.

Along with the junior-high students, all Notre Dame sophomores spend one school day per year helping serve lunch at the community kitchen. Kathy Dubel, the kitchen’s director, estimates that more than 500 seventh- and eighth-graders and nearly 1,300 sophomores have participated over the years.

“This is so eye-opening to them. Most of our kids don’t really have a view of poverty,” said Karen Jennings, the school’s junior-high coordinator, who also oversees the soup-kitchen effort.

Yet participants are able to adapt quickly: “They love it,” Jennings said. “They all ask to come back.”

One such person is Tyler Richards, 13, who made his debut at the kitchen Jan. 3.

“It was pretty easy because everybody (from the school) was there to help,” said Tyler, an eighth-grader, who served rice and set tables.

Tyler added that he was at ease interacting with the guests, saying that “they were all nice.” In fact, Jennings observed that some patrons “come for the companionship more than the food.”

“They’re polite and nice to talk to. It’s a pretty comfortable environment there,” added Liam Scarselletta, 14, an eighth-grader who prepared food and led the pre-meal prayer Jan. 3.

Eighth-grader Ally Finnerty, 13, counted plates and helped make and serve the salad that day. She also enjoyed meeting soup-kitchen guests — “I’m a pretty talkative person, so I don’t usually have trouble with words,” she said — but the most profound part for her was knowing she was helping people in need.

“It’s kind of rewarding to watch people be happy when they get food,” she said. “They were really appreciative.”

The involvement of eighth-grader Megan Pratt, 13, actually predates her time at Notre Dame; she has volunteered at the kitchen with her parents since third grade. Over the years, she said, she has discovered more similarities than differences between herself and the guests.

“I feel like we shouldn’t segregate into different levels of people. I felt they were just like us, and we should treat them the same,” she said.

“It also builds empathy and understanding for poor and low-income neighbors, and offers insight into the root causes of hunger and poverty,” noted Dubel, who also serves as justice-and-peace coordinator for Catholic Charities of Chemung/Schuyler.

“This opens their eyes and their hearts,” added Jennings, who has been involved with the soup-kitchen project for 18 years. It originated in 1997 at Holy Family Junior High School and has continued since Holy Family closed in 2012 and Notre Dame added seventh and eighth grades the same year.

Jennings is among many faculty and staff members, as well as Notre Dame parents, who are actively involved in the initiative. For instance, Michelle Drake, a former Notre Dame teacher, was recognized during the Catholic Charities social-ministry banquet this past June for her role coordinating the students’ volunteer visits. Also at that dinner, the high school’s longstanding role at the kitchen was noted by the Chemung County Youth Bureau.

“People are very loyal to our soup kitchen,” Jennings said.