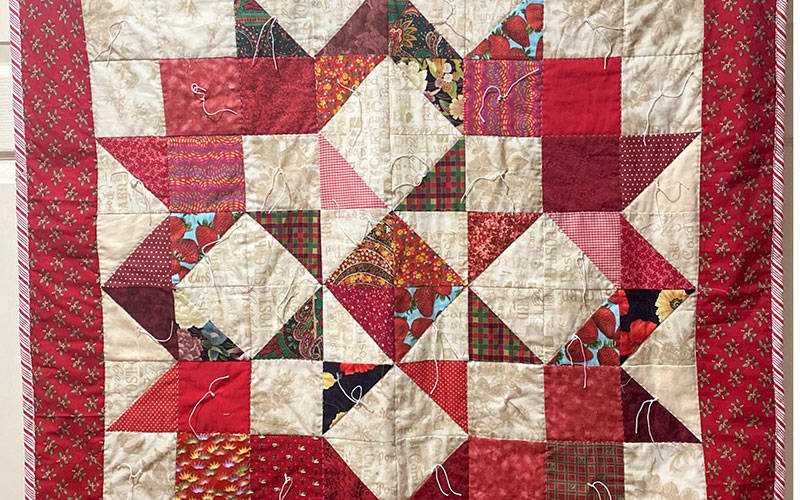 Deacon George Welch and his wife, Paula, firmly believe that prayer has the power to bring Jesus’ healing touch to those who need it. This belief serves as the foundation for a prayer-quilt ministry the couple began several years ago.

Through this ministry, Paula Welch creates colorful lap quilts, while Deacon Welch takes to social media, using Facebook posts to ask people to pray for the recipients of the quilts. He encourages people to click the “like” button on the post after saying a prayer for the recipient, and Paula ties a knot into the quilt for each “like” and prayer the post generates. Each knot, therefore, is a tangible sign of the community’s care for the recipients of the quilts, Paula Welch said, noting that this accessible symbolism was one of the reasons she initially began making prayer quilts several years ago.

“People could actually have something they could see and feel that would make them aware of the community that was praying for them,” she said. “This is a community, and you could feel those knots and know that people were praying for you.”

A longtime quilter, Paula Welch also initially liked having a purpose and a home lined up for the quilts she loves to make. She’s been making quilts since her mother, a seamstress, taught her to quilt when she was 10.

After she started making prayer quilts four or five years ago, she invited community participation in the process in a different way. When each quilt was nearly finished, she hung it up in the chapel at St. Joseph Hospital in Elmira, where Deacon Welch was chaplain until January 2020, and invited people visiting the chapel to tie knots in the quilt and pray for the recipient. The pandemic disrupted this process, however.

“Just as we were locking down for COVID, I had three prayer quilts and no place to put them. The chapel was closed. Churches were closed,” she recalled. “George came up with the idea of putting them on Facebook so we could get people to participate through Facebook in the prayer-quilt ministry.”

If people who “like” the quilts on Facebook also post comments to let Deacon Welch know about any additional prayers prayed for the recipients — such as decades of the rosary — Paula Welch will tie additional knots onto the quilt to reflect those prayers.

These prayers are what make the quilts so comforting to their recipients, said Deacon Welch, who received a prayer quilt of his own the first time he had surgery to remove cancer. The quilt reminds Deacon Welch that Jesus told his followers, “Where two or three are gathered in my name, there am I in the midst of them.”

“There are more than two of those knots. That represents the connectedness that you have,” said Deacon Welch, who serves at Most Holy Name of Jesus Parish in Elmira. “There’s positivity in those knots, because you know those people were praying for you.”

The quilts serve as an extension of Jesus’ healing touch, he added.

“Even though we’re doing it virtually right now, when you trust and you believe what our Catholic faith tells us about wherever two or more are gathered in my name, there I am, that touch is real, even virtually,” he said.

Jesus’ healing touch is a common theme throughout the New Testament accounts of his life, Deacon Welch said, noting the way Jesus’ touch brought Lazarus and a little girl back to life, stopped a woman’s bleeding and cured a man born blind.

“In every one of those stories, Jesus touches, and to me, this prayer quilt is another way for people to experience the touch of God, the touch of Jesus,” Deacon Welch said. “That’s what I feel. … When I’m feeling really insecure, I sleep with that quilt over me, and it’s been a real strength for me. It leads me into healing.”

Many other prayer-quilt recipients feel the same way, he noted. One such recipient is a friend who currently is dealing with a treatable illness and called the couple recently to ask for more prayers, Paula Welch added.

“She said she’s taken it when she’s gone to different hospitals and to doctors’ appointments. She was just very grateful for the quilt,” she said.