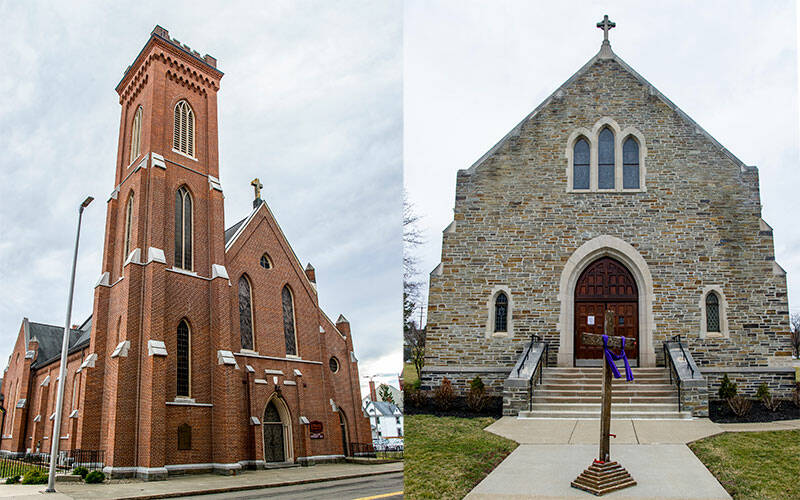 Ss. Peter and Paul (left) and Our Lady of Lourdes Churches in Elmira have closed. (Courier file photos)

Catholic churches in Elmira combine into one parish

Father Scott Kubinski, pastor of Most Holy Name of Jesus Parish, informed parishioners Nov. 13 and 14 that Bishop Salvatore R. Matano had issued a decree of relegation for Ss. Peter and Paul Church, located on Elmira’s east side, and Our Lady of Lourdes Church, on the city’s west side.

In his announcement, Father Kubinski noted that Bishop Matano issued the decree following consultation with the Diocese of Rochester’s Presbyteral Council on Nov. 3. The parish had formally petitioned the bishop for a decree of relegation based on recommendations made in the spring by its finance and parish councils.

As noted canon 1222 of the Code of Canon Law, “relegation” is a bishop’s decision that a Catholic church is no longer to be used for worship.

Father Kubinski told the Catholic Courier that Ss. Peter and Paul Church as well as Our Lady of Lourdes’ church and former convent are being put up for sale. However, Ss. Peter and Paul’s parish center, which houses Catholic Charities’ Elmira Community Kitchen, is remaining open. The former rectory, which houses Chemung County Habitat for Humanity, also remains open.

Ss. Peter and Paul, located across from St. Joseph’s Hospital, is the oldest parish in Elmira, dating to the 1840s. Its current building was erected in 1857. Our Lady of Lourdes, on the other hand, was the most recently founded Elmira parish, having formed in 1940 and opened its church in 1941.

Father Kubinski said plans will likely be made for a closing Mass or ceremony including pictures and other memorabilia from both churches.

Ss. Peter and Paul and Our Lady of Lourdes have been used only sparingly for worship since the coronavirus pandemic took hold in March 2020. Father Kubinski noted that both churches require extensive repairs beyond what the parish can currently afford.

Although not included in the decree of relegation, the parish’s St. Casimir Church currently is unavailable for worship due to a faulty ceiling. Father Kubinski said Masses cannot resume there until the ceiling is replaced, but that it’s uncertain whether the parish will be able to invest in needed repairs.

St. Casimir’s uncertain future combines with relegation of the two churches to make St. Patrick and St. Mary Southside the only two Catholic churches currently in operation in Elmira, which had nine churches just a quarter-century ago. Since then, St. John the Baptist and St. Cecilia closed in 1998; St. Anthony in 2008; and St. Charles Borromeo in Elmira Heights in early 2020.

Much of the impetus for these closures can be attributed to population declines in the city of Elmira, which according to U.S. Census data lost 7.5 percent of its residents between April 1, 2010, and July 1, 2019.

Moreover, statistics from the diocesan Department of Pastoral Services show that average weekend Mass attendance in Elmira dropped from 2,716 in 2009 to 1,583 in 2019 — a decline of more than 40 percent. In June 2021, weekend attendance was just 468, as worshipers slowly returned to church following the suspension of public Masses due to the pandemic.

Father Kubinski said the two church closings should come as no surprise to members of the parish community, given that parish meetings for several years have addressed the need to downsize Most Holy Name of Jesus Parish, which formed in 2018 as a combination of the city’s three parishes.

“We said pretty early on that we wouldn’t be able to remain as is,” Father Kubinski said, noting that parishioners have been aware of potential significant changes “not in the distant future but, at this point, sooner rather than later.”

Father Kubinski said declining attendance, decreasing revenue and fewer available priests all factor into Elmira’s current reality and also are challenges for parishes across the entire Diocese of Rochester.

“It is not an easy time. There certainly is a sadness, but a recognition that we can’t stay in the past, stay as is,” Father Kubinski added. “We have to move forward. That necessitates reducing our buildings, including our churches.”