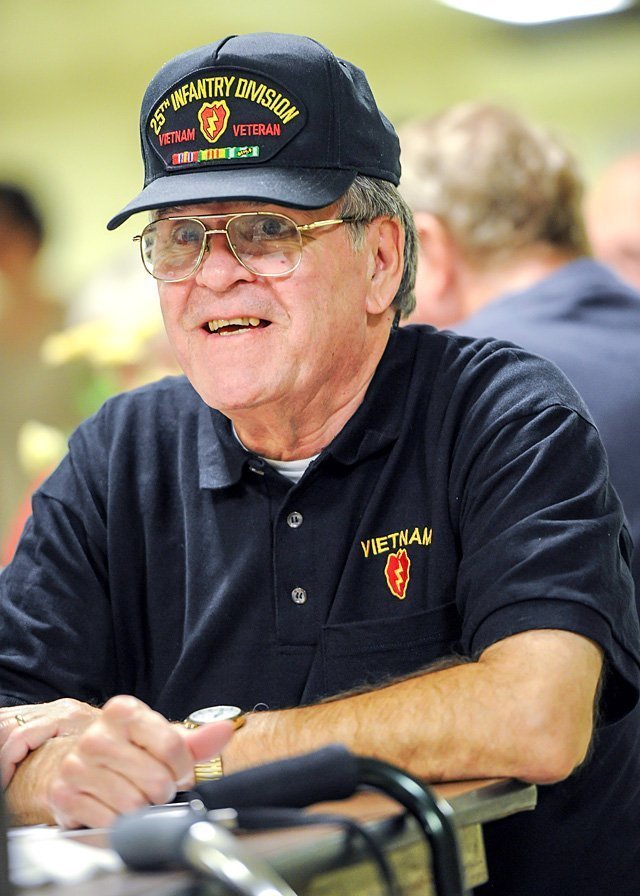 Not long after the parish life committees for Elmira’s Catholic parishes were consolidated last year, members noted that a comprehensive listing of local Catholic military veterans hadn’t been compiled since World War II.

What ensued was an impressive effort to make up for lost time.

The newly combined committee set out to gather as many names as possible of living and deceased United States veterans from the parishes of St. Mary Southside, Christ the Redeemer and Blessed Sacrament. Those names, along with photographs and personal stories about their military service, were included in commemorative booklets given out at a veterans’ recognition dinner held Nov. 5.

Approximately 160 guests and volunteer workers came together for the event, which took place at St. Charles Borromeo Church in Elmira Heights.

"It was very well-appreciated," Anne Bremer, a member of the parish life committee, said of the dinner.

Among the honored attendees were veterans from as far back at World War II. Meanwhile, veterans in the booklet are listed all the way back to World War I and continuing through World War II, the Korean and Vietnam wars, and more recent conflicts in such places as Kuwait, Iraq and Afghanistan. 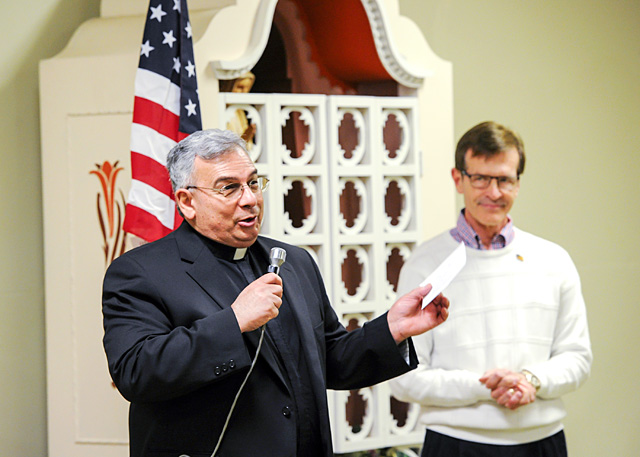 Information for the booklet was submitted by veterans and family members over the past several months. In all, 189 names are listed from the parishes of St. Mary Southside, Christ the Redeemer (St. Casimir, St. Charles Borromeo and Our Lady of Lourdes churches) and Blessed Sacrament (Ss. Peter and Paul, St. Patrick).

The roster notes the veterans’ branches of service, years served and conflicts in which they were involved; only a few had military hitches during peacetime. Three from the list — Claudius J. Grey (Korea), Lee Baiz (Vietnam) and Richard Elliott (Vietnam) — are noted as having been killed in battle.

In the booklet’s "stories" section, it is noted that Margaret Frawley Kalbaugh — one of a handful of women listed — entered the Navy Nurse Corps in August 1944 and was sent to the U.S. Naval Hospital at Sampson, Seneca County. There, she met Robert William Kalbaugh, who was stationed at Sampson’s Navy training center. They were married in August 1945.

Another story of interest comes from Gerald K. Parkes, who in 1956 was an 18-year-old Navy gun captain off the coast of Israel during the Suez Crisis. "Scared to death!" he wrote.

Other compelling anecdotes involve such folks as Sam Lisi, who was twice wounded in action with the Army during World War II and received the Purple Heart; the aforementioned Richard Elliott of the Army, who lost his life at age 21 and whose headstone at Elmira’s Ss. Peter and Paul Cemetery states "Youth is not for pleasure, but for heroism"; Eric Lindgren, a Marine who received the Bronze Star during his second tour of Iraq (he also did a tour in Afghanistan) for his work in training Iraqi police; Frank Bober, a Navy veteran who in 2005 was named Chevalier of the Legion of Honor of France for his valor during the Allied invasion of Normandy at Omaha Beach in June 1944; and Joseph Bucci, who received several commendations after flying 44 combat missions with the Air Force in North Korea in 1952.

Bremer, who is the office manager for Elmira Catholic parishes, noted that local efforts to honor veterans are extending well beyond the Nov. 5 dinner. For instance, St. Mary Parish has secured enough money to purchase a van for transporting veterans to doctor visits and other appointments. In addition, signed Christmas cards are soon being mailed to veterans; a flag on behalf of Elmira-area veterans was raised at a three-day Sept. 11 commemorative event near Rochester; and a local initiative provides veterans with handmade quilts, including one from the quilting ministry of St. Mary Our Mother Parish in Horseheads that was donated as a door prize for the recognition dinner.

According to Bremer, future dinners honoring veterans are likely to be held, and the roster will eventually go up on the parish website or a site of its own, which would allow for updated information to easily be added. She said all of these efforts help keep alive the memories of people who, in many instances, put their lives on the line for their country.

"We need to be proud of these parishioners who have gone before us and who will be here after us. Their stories are so interesting," she remarked.