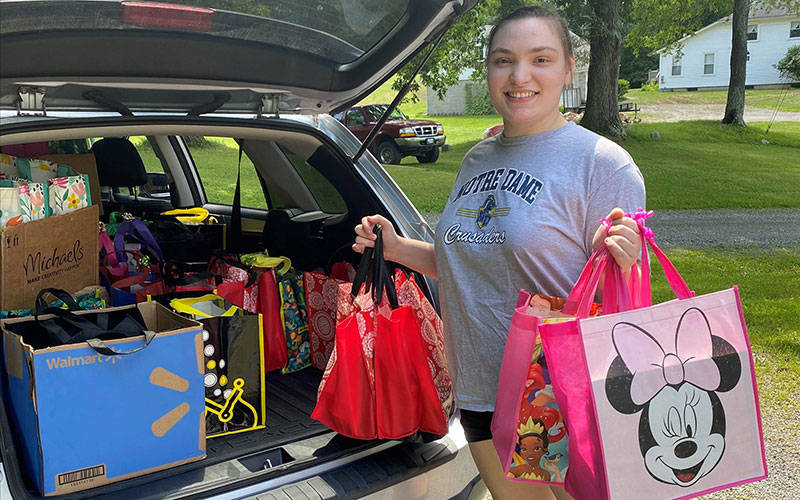 A recurring summer partnership between Catholic Charities of Chemung/Schuyler and an Elmira Notre Dame High School student has, once again, benefited community members in need.

“We, and she, thought the activity kits might ease any anxiety children or adults have when they are wrestling with homelessness,” explained Kathy Dubel, justice-and-peace director for Catholic Charities of Chemung/Schuyler.

Dubel noted that Kylee has volunteered with Catholic Charities the past few summers. She originally assisted with the agency’s USDA summer meals-for-children initiative at Blandford Park on Elmira’s east side, where meals were provided by the Elmira Central School District and volunteers from Catholic Charities’ nearby Elmira Community Kitchen helping out.

After kids finished their USDA lunches, Kylee, whom Dubel described as a gifted artist, would engage them with a variety of arts-and-crafts projects she organized. She and her parents, Kim and Dan, provided the supplies; her parents often assisted her with the activities as well.

“The children loved her,” Dubel remarked.

Dubel said USDA lunches could not be offered at Blandford Park this summer or last due to the coronavirus pandemic.

“We are all hoping that we can return to that fun summer program next year,” she said.