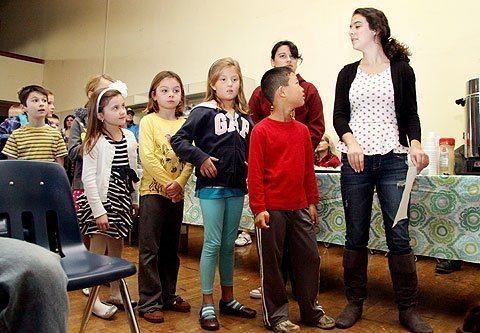 Changes for Elmira’s Catholic parishes — staff realignment, a school closing and a new faith-formation center — have been considerable as of late. And there’s more to come — including the possible closing of at least one church — as local parishes band together to serve Catholics effectively amid present-day economic and demographic realities.

Three city parishes, with a total of six worship sites, are affected by the transitions:

* Blessed Sacrament, which comprises Ss. Peter and Paul in eastern Elmira and St. Patrick in the city’s center. Father Rick Farrell is pastor.

* St. Mary, a single church on the south side with Father John DeSocio as pastor.

No major changes are currently planned for properties at St. Mary or Blessed Sacrament, but there has been significant activity in Christ the Redeemer. Although regular Masses have continued in both buildings, Our Lady of Lourdes and St. Charles Borromeo churches have been up for sale since May 2012. Several other properties on the two churches’ campuses also are listed for sale. David Quinn, director of finance and administration for all of Elmira’s parishes, said this approach is consistent with diocesan guidelines that buildings on church campuses should be listed for sale as packages rather than individually.

Quinn said no offers have been made thus far on either church. But he noted that a potential sale arising from any offers made in the near future would be put on hold because no such major transactions can occur in the Rochester Diocese until a permanent bishop is in place. Canonical limitations on diocesan decision-making took effect Sept. 21 when Pope Benedict XVI accepted the resignation of Bishop Emeritus Matthew H. Clark and named Syracuse Bishop Robert J. Cunningham to serve as Rochester’s apostolic administrator. Bishop Cunningham will continue in that caretaker role until a new bishop is named, which is not expected to occur for several more months.

St. Casimir’s church and related properties have not been listed for sale even though they were appraised along with those at St. Charles and Our Lady of Lourdes. According to Quinn, the St. Casimir properties are not being listed because Elmira’s pastors deemed in the spring of 2012 that the soon-to-be-closed Holy Family Middle School — located on St. Casimir’s campus — should become a regional faith-formation center. Quinn said the facility provides ample classroom and office space as well as an auditorium, stage, kitchen and gym for special events.

He said the pastors decided during the appraisal process that regional consolidation of staff, as well as buildings, would be effective in addressing duplication of services and low participation in some programs. Through surveys and town meetings in the spring of 2011 parishioners emphasized the need for catechesis for all ages — particularly programs that would bring young people back to the pews — and improved pastoral care of senior citizens. The pastors then worked with diocesan officials to develop three full-time ministerial positions addressing these areas. The new positions replaced several part-time posts that had been spread among the city’s parishes.

"The three pastors and communities decided that by sharing programs and ministries, they could use staff to better advantage," said Karen Rinefierd, diocesan coordinator of pastoral planning and pastoral council formation.

In addition to the ministerial hires, Quinn noted that several other administrative and office positions in Elmira’s parishes also have been consolidated. Between reductions in payroll and rearrangement of building usage, he said there already has been a positive swing of $140,000 to Christ the Redeemer’s 2012-13 budget alone. Should finances continue to improve, a pastoral associate would be hired to serve all the Elmira parishes, he said.

Many of these recent changes are based on demographic and Mass-attendance trends that Rinefierd shared with pastors, staff, school officials, and finance and pastoral councils during an October 2010 meeting "just to give people a clear picture of what’s happening," she said.

The statistics were sobering. Whereas Elmira’s overall population had declined by nearly 12 percent since 1990, declines in Mass attendance from 2001 to 2009 were much sharper: 60 percent at Christ the Redeemer, 44 percent at Blessed Sacrament and 28.5 percent at St. Mary. In addition, enrollment in kindergarten through eighth grade at the two Holy Family schools had decreased by 46 percent from 2005 to 2010.

Quinn and Rinefierd acknowledged that many Elmira Catholics have struggled with the loss of beloved staff members and buildings — and, in many instances, parish identity. However, Rinefierd said that "it’s being very proactive" to enact changes now, stressing the need to reverse a decline in parish revenue before irreparable harm occurs.

"The parishes are moving in a good direction," she said.

Quinn, meanwhile, said he’s pleased at how local leadership is striving to make the transitions successful.

"I work with three pastors that have no ‘turfdom’ and are working together to do everything possible to improve the faith community," he remarked.