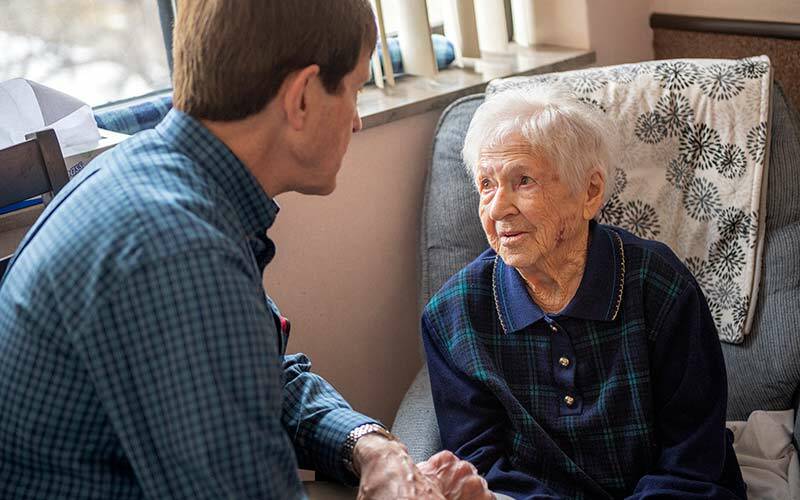 That’s no exaggeration — Touschner was born in 1912 and celebrated her 109th birthday this past Nov. 21.

Much has happened in her lifetime, as evidenced by historical data from her birth year:

• Not only had the Second World War not yet begun, neither had the First World War.

• The Wright Brothers had conducted the first successful airplane flights in history only nine years earlier.

• New Mexico and Arizona had just become the 47th and 48th U.S. states that year.

• Model T Fords were the popular cars of the day.

Amid all the changes in the world around her, Touschner has endured — quite well, actually. On an early-March morning, she was bright-eyed, alert and smiling as she welcomed visitors into her room at Chemung County Nursing Facility. Despite limited hearing and sight these days, she reported herself to be in generally good health.

“I can’t complain,” remarked Touschner, a member of St. Mary Southside Church in Most Holy Name of Jesus Parish. She added that her mind “is pretty good yet” although she said she has some trouble remembering names. When asked what nationality she is, Touschner quickly replied “American” before noting that she’s of Dutch descent.

Touschner’s life began in the small town of Dushore, Pa., about 50 miles southeast of Elmira. She attended school until eighth grade and then went to work at a local silk mill, continuing to live with her mother and sister on a farm — her father died when she was 13 — as they endured the Great Depression.

“We didn’t have much money, but we made it through,” she recalled.

She grew up Lutheran and converted to Catholicism after marrying her husband, Vincent, who was Catholic. In 1940, the couple moved from Dushore to Elmira and got jobs at Elmira Knitting Mills, attending the former St. Charles Borromeo Church in Elmira Heights for many years. They had two sons, now both deceased, as well as five grandchildren, five great-grandchildren and one great-great grandchild.

Touschner’s special talents have included gardening, quilting, sewing — she made many of her own clothes — and baking homemade pies. Her husband, who passed away in 1988, was the longtime custodian at St. Mary Southside’s church and school. Touschner lived in her home until she was 105 1/2 and has resided at the nursing facility since May 2018.

A day of honor

Touschner didn’t get to receive guests for her 108th birthday due to the coronavirus pandemic, but she celebrated her 109th in grand fashion this past Nov. 21, with five generations of her family coming together and the occasion being proclaimed Ruth Touschner Day in Chemung County.

There are sure to be considerable accolades once more when she reaches 110 in a few months. Yet despite the attention that her age attracts, Touschner — whose mother lived to be 106 — takes it all in stride.

She attends monthly Mass at the nursing facility and is regularly given holy Communion by Deacon Joseph Erway, a parish deacon from Most Holy Name of Jesus, who said that Touschner is always eager to receive the Eucharist. She still takes daily walks around the facility and looks forward to catching some fresh air as the spring weather warms up.

Touschner’s amazing age isn’t the only reason that she’s a special resident, according to Patty Mesko, activities director at Chemung County Nursing Facility.

“For one, she’s very humble. For two, she always goes out of her way to talk to staff when walking, visits her old roommate,” Mesko remarked. “I’ve never known her to have a bad word to say about anything.”

“She’s never ceases to amaze me, just her whole being,” Deacon Erway added. “She’s so humble, so kind, so sweet. She’s like everybody’s grandmother, and her faith is amazing.”

As he left Touschner’s room upon saying goodbye, Deacon Erway quietly said, “She brings tears to my eyes.”