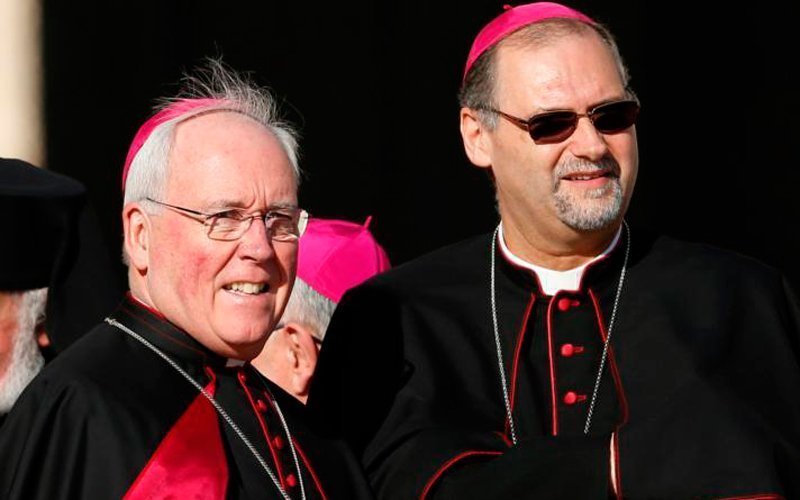 Bishop Richard J. Malone of Buffalo, N.Y., left, is pictured with another prelate in St. Peter's Square in 2014 at the Vatican. The bishop recommitted Aug. 26 to serving the diocese despite calls for his resignation over the handling of priests accused of sexual abuse. "The shepherd does not desert the flock at a difficult time," he said. (CNS photo by Paul Haring)

WASHINGTON (CNS) — Bishop Richard J. Malone of Buffalo, New York, acknowledged that even though his efforts in handling sex abuse claims in the diocese seem to have “fallen short,” he would not resign despite being asked to do so by several local leaders, including Catholics.

His statement Aug. 26 came in response to local televised news reports that he did not remove two priests from ministry after allegations of abuse were received by the diocese.

One of the priests under scrutiny resigned Aug. 27 after a statement issued by the diocese said the bishop “asked for and received” the priest’s resignation. Father Robert Yetter, pastor of St Mary Parish in Swormville, New York, has been placed on administrative leave as an investigation continues, the diocese said.

“Please note that this administrative leave is for the purpose of investigation and does not imply any determination as to the truth or falsity of the complaint,” the diocese said.

Father Yetter was one of two priests featured in two segments aired in late August by WKBW-TV. The reports suggested that the bishop did not remove the priests from ministry after sex abuse allegations were made against them, and one of them may have received multiple chances to remain in active ministry, even after officials at a school documented worries that he showed sexual grooming behaviors toward children.

“In recent days, some within our Catholic community have urged me to resign,” Bishop Malone said in an Aug. 26 statement. “I have prayed about this very question. And I have sought guidance from colleagues, friends, brothers and sisters in ministry. I am grateful for the support of so many, and I stand before you today recommitted to my calling to serve as Bishop of Buffalo. The shepherd does not desert the flock at a difficult time.”

Some of the accusations against the priests are relatively recent, including one from 2013 that claims Father Yetter made unwanted sexual advances toward a 25-year-old who says he reported it to the diocese. The young adult, who goes by the name of Kyle, said in the report that he was surprised to see that the diocese did not include the priest on a list the diocese published in March of priests who had credible abuse allegations made against them and was told that it was because he had not abused minors.

Bishop Malone, in the statement, vowed to take action, including establishing a task force that would examine the diocese’s procedures for handling claims of inappropriate conduct with adults “and to recommend methods for honoring all victims in a manner consistent with our protection for children.” The statement suggested that he may have been too focused on protocols and procedures aimed at protecting minors.

Addressing victims of sexual abuse of all ages, he said: “I am profoundly sorry for the pain this has caused you. While nothing I can say to you could heal the hurt of this tragic breach of trust, I do as bishop of this diocese extend my most heartfelt apologies. I want you to know that we will do all we can to restore your faith, to help you heal, and to help you begin to move forward.”

The second case featured in the televised reports focuses on Father Art Smith, who was removed from ministry by Buffalo’s previous bishop after sending a Facebook message in 2011 that said “love you” to a minor, but who was allowed to return to ministry at a nursing home in 2012, with Bishop Malone’s permission after becoming Buffalo’s bishop. However, the following year, the TV station report said, Father Smith heard confessions at a Catholic youth conference, even though a school administrator had told the diocese that he had been “grooming” children.

The report goes on to show the bishop later exchanged correspondence with Vatican officials that showed worries about the “gravity” of the priest’s situation because he would not stay at a treatment center and would then have to be placed on a list of “unassignable priests.”

The TV station in an Aug. 22 report that said the diocese sent the following statement:

“In the case of Father Art Smith, previous issues involving boundaries with minors were carefully and properly addressed. He was eventually given limited faculties at a senior living facility but no parish assignment. It wasn’t until March of this year that an allegation of sexual abuse of a minor was presented and immediately investigated. The claim was never ignored. Father Smith has been on administrative leave since April. At the recommendation of the Diocesan Review Board, Bishop Malone decided to forward Fr. Smith’s case to the Congregation for the Doctrine of the Faith at the Vatican.”