Embracing the 'other' - Catholic Courier 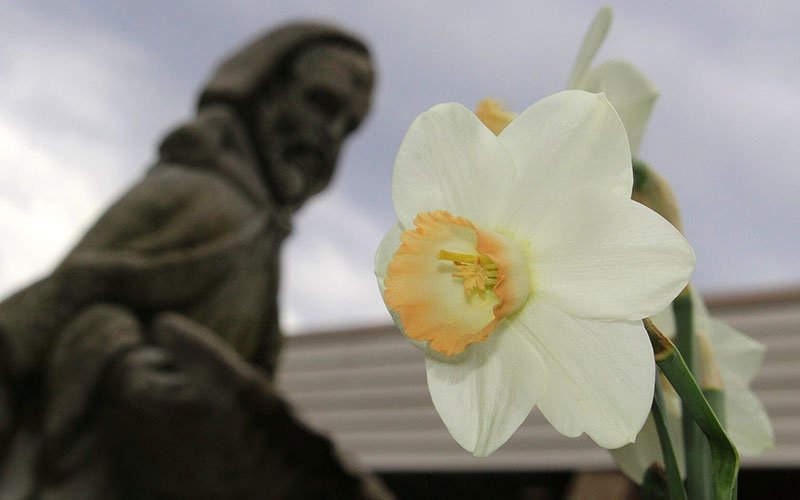 A statue of St. Francis of Assisi is pictured with blooming daffodils in a flower garden behind St. Gabriel the Archangel Church in Neenah, Wis., May 5, 2019. "It was quite a profound conversion for Francis when he encountered a leper on the road one day and, instead of turning away, reached out and embraced him. In the leper, he suddenly saw Christ," writes Susan Hines-Brigger. (CNS photo/Brad Birkholz)

The call to encounter

Ten years ago, I traveled to Assisi, Italy, on pilgrimage, to follow in the footsteps of St. Francis. For days, we immersed ourselves in the words and actions of St. Francis throughout his life.

Of all the moments that resonated with me, though, there was one story that seemed especially challenging — both for him and me. That was the story of St. Francis embracing the leper.

In Assisi during Francis’ time, those suffering from leprosy were relegated to the plains below the city, far from the everyday view of the town’s residents. Francis himself admitted that he was repulsed by the sight of the lepers.

Therefore, it was quite a profound conversion for Francis when he encountered a leper on the road one day and, instead of turning away, reached out and embraced him. In the leper, he suddenly saw Christ.

When I listened to the story, I remember immediately wondering how I would have reacted had I been in Francis’ place? Would I have been loving enough to look beyond the illness and see the person?

In the years since, I have often replayed that same question in my mind when I have encountered people that society tends to deem as “the other.” Those people, though not marked by physical illness as the lepers were, can be marked by things such as poverty, illness, addiction, sexuality, race or many other things that can force people to the margins of society.

Sometimes, I think we might marginalize these people out of fear. Or maybe we do it simply out of a lack of investment — if it doesn’t affect my life, why should I bother?

But much like with many things in our lives, we only confront the divisions that have crept into our lives when we come face to face with the reality of those situations and it closely touches our lives.

Only then are we called — much like St. Francis — to make the decision to either embrace the other or turn our backs. I am sorry to say that there have been times when I’ve done both. We probably all have.

In fact, I can still recall one rainy day when I was driving with a friend and we came to a stoplight. Standing on the sidewalk directly next to us was a weathered and dirty man sitting atop a bucket, holding a tattered cardboard sign asking for food or money. The rain had soaked his clothes and he hung his head to deflect the water from falling on his face.

Immediately, my friend told me not to look over toward him. If I did, she said, he’d probably come over to the car. Anyway, he probably only wanted money for drugs, she added. I’m embarrassed to say that the same thought briefly crossed my mind.

As I sat there, waiting for the light to turn, I glanced over at the man. We made eye contact and he gave me a nod and a soft smile, almost as if to absolve me from my judgment of him. The light changed and I went along my way.

After I drove away, I remember wondering if that was my “St. Francis embracing the leper” moment and I had carelessly driven away from it. After dropping off my friend, I retraced my route to once again find the man and bring him the umbrella I had in my car, as well as a warm meal and a blanket. But he was gone. I had missed my opportunity.

The remembrance of that day, along with the memory of St. Francis and his own encounter of the other, continues to challenge me today. For in the other, I can see Christ, if I only take the time to look.