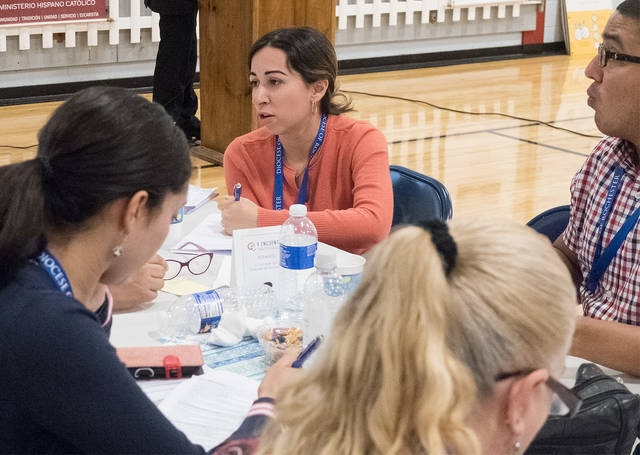 Ana Carolina Torres, a member of Nativity of the Blessed Virgin Mary Parish in Brockport, participates in the diocesan encuentro gathering in Rochester Oct. 21.

ROCHESTER — Ana Carolina Torres became emotional during the recent diocesan encuentro on Hispanic ministry, as she spoke of her family’s faith journey in the United States.

Having come to a new country without knowing a word of English, the native of Venezuela said she, her husband and their young child found the transition difficult. Equally difficult, she explained, they were living with relatives who were Protestant, and she and her family longed to reconnect with a Catholic parish.

In time, they saved enough money for a car and were able to attend Brockport’s Nativity of the Blessed Virgin Mary Church, where a sign noting the parish’s Spanish-language Mass long had beckoned to them as they passed by.

“It was a beautiful experience,” Torres said of attending that first Mass. “Even though we didn’t know anyone ‚Ä¶ we felt at home.”

The family quickly became involved in parish life, and this past spring participated in a parish-level encuentro process at Nativity. Torres then became one of more than 100 people to take part in the daylong diocesan encuentro gathering Oct. 21 at St. Ambrose Church. Both local encuentros were in preparation for the Fifth National Encuentro, titled “Missionary Disciples: Witnesses of God’s Love,” which will take place in Grapevine, Texas, in the fall of 2018 (http://vencuentro.org).

“I pray fervently that this fifth encuentro will help the Catholic Church to highlight the best of each of its cultures to create a stronger church in this great country that is home to people arriving from all over the world,” she said.

Creating a stronger church through more crosscultural connections that employs the gifts of Hispanic parishioners is the goal of the encuentro process at all levels — parish, diocesan and national, explained Father Carlos Sanchez, parochial vicar at Peace of Christ Parish, who welcomed participants and guided the Oct. 21 process. The format of the diocesan gathering included five concepts central to the overall encuentro process: Taking the First Step, Getting Involved, Accompanying Everyone, Bearing Fruit and Celebrating

Participants represented 14 parishes from around the diocese and included observers who had not taken part in a parish encuentro or hailed from parishes with few Hispanic parishioners, noted Lynette Saenz, director of the diocese’s Cultural Diversity Office.

The first step is about an encounter with “the other” in their reality to get to know their problems, challenges and dreams, said Father Sanchez.

“It’s an opportunity for us to prepare a practical response to the needs of the Latino community,” he said.

To learn more about those needs and desires, the diocese surveyed participants in the parish-level process, which took place over the spring and summer. The results of the survey were discussed, and priorities outlined from the results were assessed during the diocesan encuentro.

From discussions about the results of the survey, participants in the diocesan encuentro identified five areas of pastoral concern and action items for the diocese:

‚Ä¢ Assist with the integration efforts of Hispanic and Anglo communities in multicultural parishes.

‚Ä¢ Promote an understanding of Hispanic/Latino immigrants as full members of the body of Christ and recognize their gifts and contributions.

These five recommendations will be incorporated into a “working document” to be presented by diocesan representatives at a regional encuentro in Albany in which six of New York’s eight dioceses will participate in June, Saenz added. The demographic differences between the six participating dioceses will be of note, she said. While Hispanics tend to be minority populations in upstate parishes, they often represent the majority in downstate parishes, she said.

The majority of participants at the diocesan encuentro came from rural parishes, she added, which represents a shift in local Hispanic ministry that has largely been driven by urban parishioners. Their participation brought many new voices to the table, Saenz added.

Parishioners in rural faith communities increasingly offer several examples of outreach efforts, explained Father Jes√∫s Flores, the diocese’s coordinator of migrant ministry. Getting involved can be as simple as the invitation offered by one Cayuga County woman for migrant workers from Guatemala to attend Mass at her parish. Father Flores noted that the woman had to step out of her comfort zone to do this since she doesn’t speak a word of Spanish.

“She took that first step,” he said. “Now, thanks to (her), we have a wonderful community coming together for Mass and sharing the faith.”

Similarly, a young altar server at Nativity invited a friend to join her as an altar server for the Spanish Mass that Father Flores celebrates once a month, he said. That invitation also moved the friend’s mother to feel welcomed back to church, he added.

During the diocesan encuentro, Teresa Ortiz said she has always felt welcome at Our Lady of Peace Parish in Geneva, especially when her marriage ended 14 years ago.

“I felt a lot of support and help,” said the native of Mexico City.

Ortiz agreed with the top pastoral concerns that came out of the diocesan encuentro, especially the need for enhanced youth ministry. She said parents need to ask their children to put their smartphones down and engage more with family and their cultural roots.

“If we don’t teach our kids and our families and help them believe in God, we are nothing,” she said. “What will happen to us in 10 to 15 years?”

Grace Carson said she was happy to take part in the diocesan encuentro to show the Anglo community’s support even from those like herself who don’t speak Spanish.

“In creating bridges, we feel welcome in the other environment of the other group,” she said. “We all share the common culture of the church. ‚Ä¶ That is the hope for unity in our nation. Our nation is so divided. The church can be a great catalyst for creating more unity.”