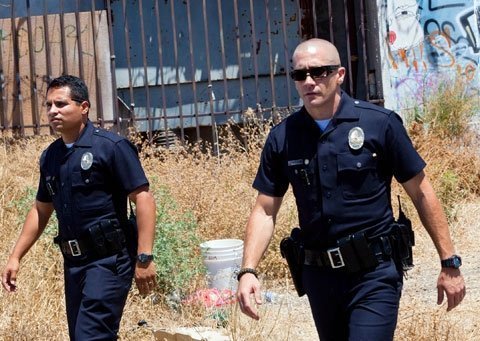 NEW YORK (CNS) — Filmed entirely with handheld cameras, "End of Watch" (Open Road) is an immersive experience. This gritty police drama has a documentary feel and authentic look, putting the viewer front and center in a clash between good and evil in the inner city.

Regrettably, the pervasive violence and incessant trash talk in "End of Watch," written and directed by David Ayer ("Training Day"), will deter many from seeing a riveting, well-acted film with a powerful Christian message of brotherhood and laying down one’s life for another.

"We’re looking for all the major food groups: dope, money and guns," Mike says. The officers are confident and cocky, but brutally honest. They are "big ghetto gun fighters" with a knack for hunting down the bad guys (and girls).

At the close of each shift, they sign their reports "EOW" ("End of Watch"), meaning they are off-duty. Needless to say, every day they can end in such a way is a good day.

Using multiple video cameras, Brian documents his performance as part of a college homework assignment. Thus, "End of Watch" unfolds through Brian’s eyes, but also in the eyes of people he meets, good and bad, since everyone has a camera these days — and is addicted to sharing videos on YouTube.

Between police calls, Brian and Mike banter about life and dream big, sharing their different cultural backgrounds. Mike is Hispanic, married to his high school sweetheart, Gabby (Natalie Martinez), expecting their first child. He’s a family man, and offers innumerable life lessons and advice to his Anglo partner when Brian falls hard for the academic Janet (Anna Kendrick), and thinks it may be time to put aside his childish ways and settle down.

In the fight for justice, these officers somehow find the inner strength to persevere despite witnessing the barbarism and inhumanity of man. This display of unwavering selflessness in the war against evil gives "End of Watch" a hope-filled Christian edge, even if organized religion plays little part in the actual film.