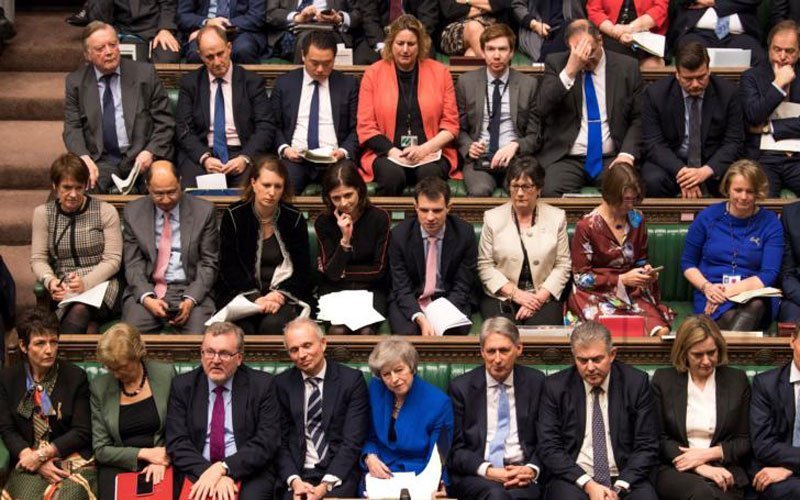 British Prime Minister Theresa May, center in blue, reacts during a no-confidence debate Jan. 16, a day after Parliament rejected her Brexit deal in London. (CNS photo by Jessica Taylor/UK Parliament via Reuters)

MANCHESTER, England (CNS) — Britain is in an “amazing political mess” over Brexit, an English bishop said.

Bishop Philip Egan of Portsmouth voiced his opinion on Twitter Jan. 16, a day after the House of Commons overwhelmingly rejected the withdrawal agreement struck between Prime Minister Theresa May and the European Union. The agreement sought to set out terms of a future relationship with the European Union following Britain’s withdrawal from the bloc, something the British people approved in a June 2016 referendum.

The 432-202 vote on the withdrawal agreement Jan. 15 represented the biggest government defeat in British history and left May fighting for her political life.

“It’s an amazing political mess after last night’s vote in the House of Commons,” Bishop Egan said in a tweet.

“No one’s clear on the right way ahead,” the bishop continued. “Let’s ask the Holy Spirit to direct us all, but especially our politicians and leaders, in finding the best plan to take us forward.”

Later, Bishop Egan told Catholic News Service by telephone: “This is a time of uncertainty, and I do think we should pray for our politicians and our leaders, that the Lord will guide them in order to find some kind of active plan and also that people will really get behind them in it.”

He said he thought Catholics should pray for the unity of the nation, “because I think it has been quite bruising, this whole debate. When you talk to people it (Brexit) often rouses quite strong feelings and passions.”

He noted that if Britain leaves the European Union, it is still part of Europe.

“As Catholics we are related to all people of our continent and that peace project — that led to the formation of the EU — we are a link to that. We should pray for that peace.”

The government survived a Jan. 16 motion of no confidence introduced by Jeremy Corbyn, the leader of the opposition Labour Party, by 325-306.

But with May’s withdrawal agreement effectively dead, it means Parliament must find another way to implement Brexit by the statutory leaving date of March 29.

Mike Kane, a Labour member of Parliament and a Catholic, told Catholic News Service in a Jan. 16 telephone interview that he voted against the withdrawal agreement principally because he thought it was “bad for the country,” but also because it would make his political constituency, which covers south Manchester, “much poorer.”

He said he was in favor of remaining in the EU partly because, he said, “Manchester Airport is on my patch, and 74 percent of its flights are to European nations.”

Kane, the founder of the Catholics for Labour group, said he also believed the EU was founded on the Catholic social teaching principles of solidarity and subsidiarity and that it has guaranteed decades of peace so “we are not sending our 18-year-olds to the trenches in wars year after year.”

A substantial number of politicians who voted against the agreement want Britain to remain within the EU and are seeking a second referendum, even though this is not provided by the terms of the 2018 European Union (Withdrawal) Act.

Others, such as Jacob Rees-Mogg, a Conservative member of Parliament and a Catholic, opposed May’s deal because they believe Britain would be better placed outside the EU and without a deal.

“The problem with the House of Commons is that three-quarters of the members voted to remain,” Rees-Mogg, chair of the pro-Brexit European Research Group, said on ITV news Jan. 15.

“Therefore, you have got a ‘remainer’ House of Commons trying to implement a ‘leave’ that it doesn’t want. That is why you have no agreement on the deal,” he said.

“From a ‘leaver’ point of view, it’s very straightforward,” he added. “We leave, and a deal is secondary to the issue of leaving.”

Catholic News Service contacted the Bishops’ Conference of England and Wales, whose representatives declined to comment.

Clive Chapman, senior officer for mission and advocacy for the Caritas Social Action Network, an agency of the bishops’ conference, said he was concerned about ongoing uncertainty over the status of EU migrants living in Britain as well as for British citizens living in the EU.

He told CNS that Catholic politicians should heed the teachings of Pope Francis when weighing arguments about closing borders to migrants, warning that the “rhetoric around Brexit” could worsen the plight of genuine refugees.

“Any talk of Britain becoming a more isolated country could be seen to be at variance with the church’s view that we practice humanitarian development well for people who are displaced,” said Chapman.