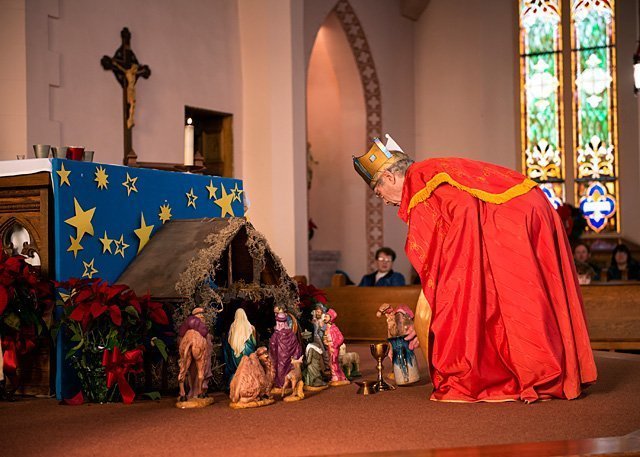 Kent Salisbury places a gift in front of the crèche at Penn Yan's St. Michael Church during a feast of the Epiphany celebration Jan 8.

Most children are used to tagging along with their parents at various events where children are allowed or sometimes even welcomed to attend. At a recent Epiphany celebration in Penn Yan, however, children not only were welcomed, but they were the guests of honor.

"We invited the children who had been baptized in the parish in the last few years. We addressed the invitations to the children and just asked the parents to RSVP," said Father Leo Reinhardt, pastor of Our Lady of the Lakes Catholic Community, which comprises worship sites in Penn Yan, Naples, Prattsburgh and Stanley. 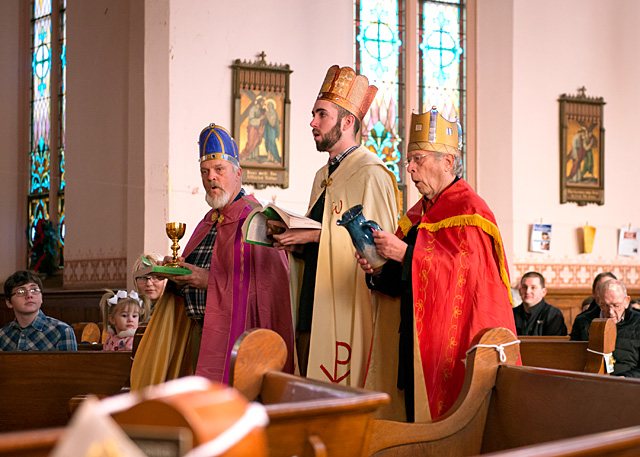 Jeff Larzelere (from left,) Charlie Santora and Kent Salisbury portray the Three Kings during a feast of the Epiphany celebration at St. Michael Church in Penn Yan Jan. 8.

The children — and by extension, their parents — were invited to the parish’s Epiphany celebration, which took place during the regular 9:30 a.m. Mass at St. Michael Church in Penn Yan, as well as the parish’s Epiphany Breakfast Party immediately following the Mass. During the celebration Father Reinhardt, who wore special vestments created for him by a parishioner and her son, gathered the children around him and spoke to them about the Christmas star and the theme of light.

"I just reminded them of the light that had been given them when they were baptized. The choir sang ‘This Little Light of Mine’ and everybody sang the response," he said.

Parishioners who had dressed up as the Three Kings made an appearance, and during the free breakfast after Mass, coloring pages and star-shaped balloons were handed out to the more than 30 children in attendance.

"We had a good turnout and people enjoyed it. I think the people who came did get a lot out of it," said Father Reinhardt, who has been at Our Lady of the Lakes since 2013.

The Epiphany events provided Father Reinhardt and the parish staff with a way to connect with Catholic families in the area, including those who may not attend Mass regularly.

"Unfortunately many times people will have their children baptized but then we don’t really see them on a regular basis. As soon as the baptism was done they’d stop coming," he said.

Sometimes families stop coming because they mistakenly believe weekly Mass attendance is not really that important, he noted. They are good people, they believe in God and want to raise their children to know right from wrong and receive the sacraments, but they don’t believe they have to go to worship God, he added.

On the other hand, some young families would like to attend Mass regularly but don’t because they’re afraid their children will be disruptive to their fellow parishioners, he noted. In some instances parents split up for Mass, with one parent staying home with the children while the other attends Mass, then switching places. In other instances the families just stop going to Mass regularly and only attend on such special days as Christmas and Easter, he said. Father Reinhardt acknowledged that bringing young children to Mass can be challenging and nerve-wracking, but said he tries to make parents feel welcome. Most of Our Lady of the Lakes’ parishioners are very accepting of young children as well, but on the rare occasion that someone makes a disparaging comment about a child disrupting Mass, Father Reinhardt is quick to step in.

"If somebody says something, I’ll say, ‘Do you have grandchildren? When the child comes over for Christmas or Thanksgiving and the child cries out, you don’t ask them to leave, do you?’ They belong there," he explained.

The Epiphany celebration and breakfast provided the parish with a good way to encourage parents to bring their children to church and to show them that the little ones are welcome, he added.

Quite a few families participated in the Epiphany festivities on Jan. 8, but will they continue coming to Mass every week? Father Reinhardt is not sure, but he’s hopeful.

"You just kind of plant the seed and see what happens," he said.