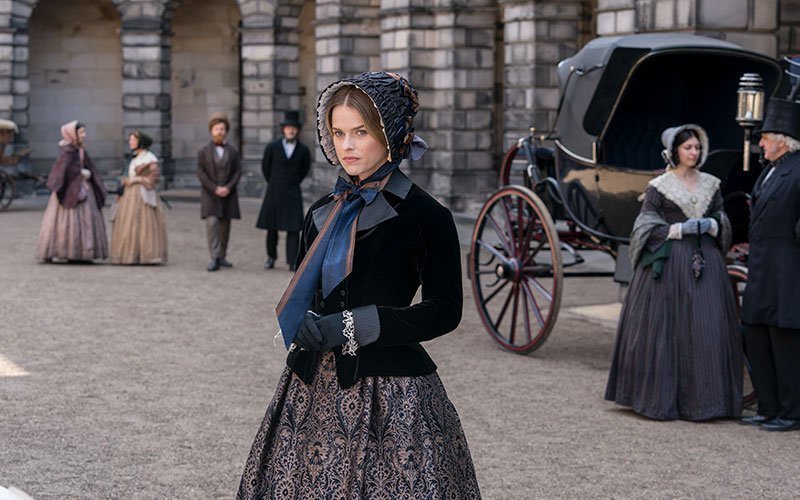 A scene from the show "Belgravia." (Photo courtesy of Carnival Films)

NEW YORK (CNS) — With its secrets from the past and unexpected destinies lying in wait for some of its characters, the six-part costume drama “Belgravia” has the atmosphere of a tale by Charles Dickens.

That’s not to say the lavish ITV series — the first episode of which became available on Epix (currently accessible via Amazon Prime) April 12 — is derivative.

Rather, Julian Fellowes’ adaptation of his own 2016 historical novel uses similar techniques to those of the great Victorian author to infuse suspense and interest into an original story. Thus, much like anxious fans of Dickens’ serialized works, many viewers will be hanging on the weekly release of the remaining installments as they appear each Sunday through May 17.

Though the bulk of the action takes place in 1841 London, crucial opening events transpire 26 years earlier in Belgium as Britain and its allies prepare to square off against Napoleon in the decisive Battle of Waterloo. Among the officers riding off to that struggle is Lord Edmund Bellasis (Jeremy Neumark Jones), blue-blooded son and heir of the Earl of Brockenhurst (Tom Wilkinson).

In a case of potential social mismatching, Edmund has fallen for Sophia (Emily Reid), daughter of the Duke of Wellington’s (Nicholas Rowe) victualer, James Trenchard (Philip Glenister). Though James is an up-and-coming businessman and enjoys the duke’s favor, he remains a nouveau-riche commoner — as, of course, does his daughter.

Heedless of such distinctions, Edmund arranges for a secret wedding in which Sophia, with her father’s encouragement, happily participates. She later has reason to believe, however, the ceremony was a sham and that Edmund has merely seduced her. That’s especially bad news because Sophia is pregnant.

Flash forward two-and-a-half decades to the newly created, instantly fashionable London neighborhood of the title where high society is abuzz over the fact that the Countess of Brockenhurst (Harriet Walter) has taken an ordinary cloth merchant named Charles Pope (Jack Bardoe) under her wing. What possible interest can she have in this ambitious but obscure young man?

The countess, moreover, is not alone in seeking to foster Charles’ fortunes. James and his wife, Anne (Tamsin Greig), have also followed his career with care, perhaps because James and Charles’ late father were old friends. Whatever its basis, their regard for Charles increasingly excites the truculent jealousy of their lazy, ne’er-do-well son, Oliver (Richard Goulding).

Another person drawn into Charles’ orbit is his feisty contemporary, Lady Maria Grey (Ella Purnell). The two rapidly fall for each other, despite the fact that Maria’s mother, Lady Templemore (Tara Fitzgerald), has arranged a loveless but profitable match between Maria and the Brockenhursts’ sleazy nephew, John Bellasis (Adam James).

Along with the illegitimacy theme inherent in its premise, “Belgravia” also discreetly depicts the adulterous affair Oliver’s wife, Susan (Alice Eve), begins carrying on with John in a couple of bedroom scenes that involve partial nudity.

The resolution of this plot line — which is bound up in the fact that Susan and Oliver have remained childless through 11 years of marriage — is morally murky. So, although the series, which also includes a couple of mild oaths and brief medical gore, is mostly acceptable for older teens, this tie-up might require adult guidance or a bit of family discussion.

Comparisons between “Belgravia” and Fellowes’ landmark program “Downton Abbey” are perhaps inevitable. One marked difference between the two is that here the emphasis is much more on the folks upstairs rather than down.

A couple of servants — the Trenchards’ butler, Turton (Paul Ritter), and Anne’s lady’s maid, Ellis (Saskia Reeves) — do play an important role as they’re suborned into spying on their employers. But most of the action takes place in drawing rooms rather than below stairs.

Handsome and engaging, “Belgravia” is a treat amid taxing times.