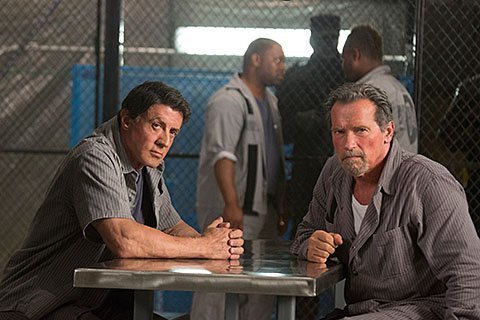 Sylvester Stallone and Arnold Schwarzenegger star in a scene from the movie "Escape Plan." The Catholic News Service classification is L -- limited adult audience, films whose problematic content many adults would find troubling. The Motion Picture Association of America rating is R -- restricted. Under 17 requires accompanying parent or adult guardian.

NEW YORK (CNS) — While it may be more intelligent than many of its genre peers, the actioner "Escape Plan" (Summit), which pairs Sylvester Stallone and Arnold Schwarzenegger, is also too harsh for all but the hardiest viewers.

Stallone plays Ray Breslin, an expert on prison security who poses as an inmate to test each institution he investigates. Ray gets more than he bargained for, however, when — at the apparent behest of the CIA — he goes undercover in a privately run maximum-security jail that does not officially exist.

That’s because the lockup’s cruel warden, Willard Hobbes (Jim Caviezel), who used Ray’s own textbook to design the place, knows his real identity but refuses to treat him as anything other than an ordinary convict. Poor old Ray, it seems, has been double-crossed this time and left to rot.

Enter Schwarzenegger as Emil Rottmayer, the slammer’s top dog. He joins forces with Ray and together they search for flaws in the system that could help them both fly the coop.

Working from a script by Miles Chapman and Arnell Jesko, director Mikael Hafstrom uses Ray’s Sherlock Holmes-like observational skills to good effect, adding a bit of substance to the mayhem. His picture also implicitly raises real-life issues about the treatment of captured terrorists and other criminals.

But brutality abounds in the movie’s main setting. Inmates brawl among themselves, masked guards beat their charges with gusto, and Hobbes has the sadistic COs under his command work Ray over nightly to break his spirit by depriving him of sleep.

Ray and Emil also stage fights to foster their escape plan; ironically, isolation cells, Ray has found, are usually the weakest point in any penitentiary. So the basic question remains how much pleasure or edification moviegoers will derive from watching the former governor of California head-butt Rocky.

The film contains constant violence, much of it gory, an implied nonmarital situation, a revenge theme, much rough and crude language, a coarse joke and a couple of obscene gestures. The Catholic News Service classification is L — limited adult audience, films whose problematic content many adults would find troubling. The Motion Picture Association of America rating is R — restricted. Under 17 requires accompanying parent or adult guardian.