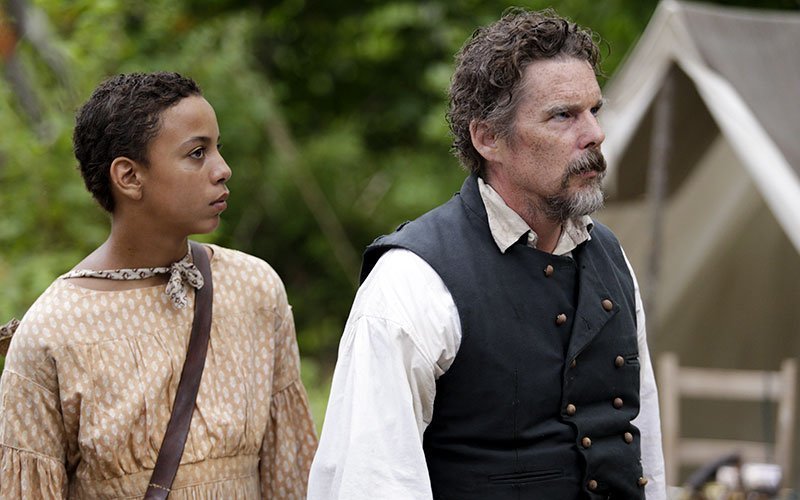 The timely and provocative historical miniseries, which McBride also co-wrote, will air in seven one-hour episodes in that timeslot, concluding Sunday, Nov. 22.

The production is thus something of a Hawke family affair.

“Most folks never heard of John Brown,” says the saga’s fictitious narrator, Henry Shackleford (Joshua Caleb Johnson) in its brief prologue. “If they had, all they know is he was hung for being a traitor and stirring all kinds of trouble and starting a civil war.”

Hoping to inspire a rebellion by enslaved people across the South, Brown led an October 1859 raid on Harper’s Ferry in what is now West Virginia, then the site of the nation’s largest armory. Convicted of treason against the Commonwealth of Virginia, murder and inciting a Negro insurrection, he was hanged outside a Charles Town courthouse the following Dec. 2.

It’s in 1858 Kansas, however, that Shackleford, then an adolescent slave, first encounters his people’s would-be liberator in a tavern. There, Shackleford ‘s unnamed father (Derrick Baskin) shaves the notoriously bedraggled Brown as the lad sits at his feet.

Predictably, a dispute between Brown and the tavern’s pro-slavery operator (David Morse) quickly devolves into violence. Brown shoots the proprietor and he, in turn, kills Shackleford’s dad. The teenager then flees with Brown, becoming a member of his abolitionist army.

Mistakenly believing he’s called Henrietta, Brown assumes Shackleford is a girl and outfits him in a dress, a masquerade Shackleford largely maintains throughout the series. On his first day among what he characterizes as a “rag tag assortment of the saddest, scrawniest individuals I ever saw,” Shackleford bites into an onion — and acquires a new nickname.

Brown hopes that by seizing the 5,000 guns stored at Harper’s Ferry he can “light the fuse to start the great war to end slavery.” First, though, he and Shackleford travel to Rochester, New York, home of the great Frederick Douglass (Daveed Diggs) — whom Brown calls “the king of the Negroes” — hoping to obtain Douglass’ blessing for Brown’s scheme.

Fearing that “bloody revolution will take longer to reach equality,” however, Douglass declines to endorse the attack.

In keeping with the real-life events that inspired its source material, “The Good Lord Bird” depicts strong violence. Additionally, its sharply written scripts include some vulgarity and frequent racial slurs. Like an anti-Catholic slight that’s also found in the dialogue, such racist remarks sadly but accurately reflect the tenor of the period.

Taken together with the program’s treatment of prostitution and adultery, its references to unseen sexual activity and the partial nudity viewers do see, these elements make the program best for grown-ups. Given its potential educational value, both in terms of history and current controversies, at least some parents may nonetheless feel that the series is acceptable for mature teens.

Performances are strong all around. Hawke successfully embodies his character’s fervent sincerity while Johnson makes a convincing Shackleford.

As portrayed here, Brown emerges as a paradoxical figure. A high-minded — if obsessive — reformer, he’s also crude and all-too-easily distracted by trivial details.

The morally vexing questions the series raises, of course, speak directly to our times. Brown’s resort to violent means is hard to square with Gospel values. Yet the massive conflict he helped to precipitate liberated millions.

Though he was once considered a fanatic, history has reassessed Brown and his legacy. As Douglass sums it up, “John Brown’s zeal in the cause of freedom was infinitely superior to mine.”

Refreshingly consequential, “The Good Lord Bird” reminds viewers that, despite the passage of a century and a half since the tumult it portrays, America’s union is still far from perfect.