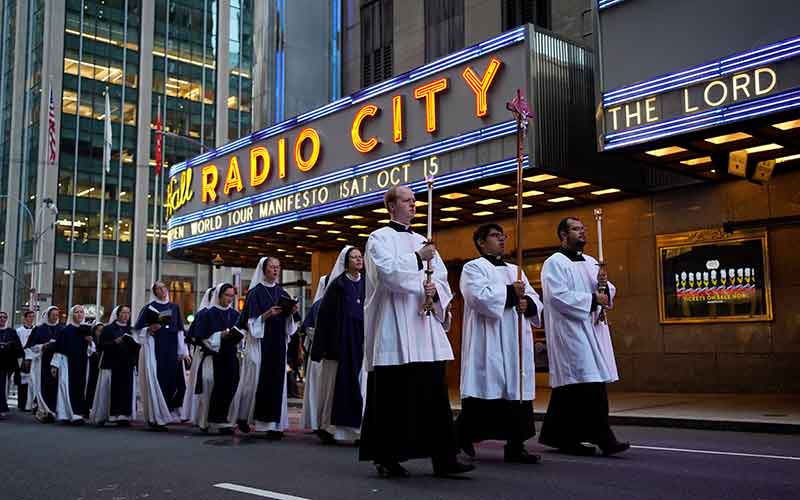 NEW YORK (CNS) — A eucharistic procession through Midtown Manhattan Oct. 11, the Mass that preceded it and the adoration that followed fittingly marked the 60th anniversary of the opening of the Second Vatican Council “in a particularly eucharistic way,” said Father Roger Landry.

The council was “convened in order to reinvigorate the church’s mission to sanctify the world and bring Christ and his Gospel even to those corners considered most forlorn,” said the priest.

He was the main celebrant and homilist for the Mass, celebrated at the Church of the Sacred Heart of Jesus in the New York borough of Manhattan.

“The fathers of Vatican II repeatedly declared that Jesus in the holy Eucharist is the source and summit, root and center of the Christian life and of everything the church does,” Father Landry said in his homily.

“All the main teachings of the council — on the primacy of the word of God, on the universal call to holiness, on authentic Christian humanism, on the vocation of the laity, on religious freedom and on relations with other religions — can all be looked at through a eucharistic lens,” he said.

A eucharistic procession takes Jesus Christ “out into the world he redeemed,” he said. It proclaims Jesus, “by our joyful witness, devout prayers and enthusiastic singing to be really, truly and substantially among us,” and invites others “to join us in following him who is the Way,” he continued.

“Our world needs Jesus Christ just as much as ever and as Catholics we cannot keep the treasure of our eucharistic Lord within our churches and tabernacles. The love of Christ, and the love of others, compels us to bring him out and share him,” added Father Landry, who is a chaplain at Columbia University.

After the early evening Mass, the eucharistic procession of priests, seminarians, women religious and laypeople traveled a mile-long route through Midtown Manhattan.

The liturgical events were affiliated with the Napa Institute’s Principled Entrepreneurship Conference taking place in New York City Oct. 11-12. The Busch School of Business at The Catholic University of America in Washington was a conference sponsor.

In his homily, Father Landry noted that the day’s eucharistic events also were taking place within the context of the three-year National Eucharistic Revival of the Catholic Church in the United States.

The U.S. bishops planned the revival “to stimulate greater eucharistic knowledge, faith, amazement, love, life and mission,” he said, adding that “there are various important parts of the revival.”

“One is to help all Catholics better understand and live the Mass. Another is greater eucharistic discipleship, shown in a particular way by spending time with Jesus in eucharistic adoration,” he said.

“A third is eucharistic charity, as we imitate Jesus in giving our body and blood, our time, money and talents, out of love for those Jesus loves,” Father Landry said. “And a fourth is a more ardent eucharistic apostolate, in which we infectiously share our eucharistic faith with others.”

Launched June 19, the feast of Corpus Christi, the revival is a three-year initiative of the U.S. Conference of Catholic Bishops to revitalize Catholics’ understanding of and love for the Real Presence in the Eucharist.

Father Landry is one of several “National Eucharistic Preachers”

Father Landry, a priest of the Diocese of Fall River, Massachusetts, is one of several priests the U.S. bishops have appointed as one of several “National Eucharistic Preachers” for the revival. He also is the former attache to the Vatican’s Permanent Observer Mission to the United Nations in New York.

“Today we take the Lord out to what St. John Paul II famously called the ‘capital of the world,'” Father Landry said about the procession to follow through Manhattan’s streets. “We accompany him, just like the apostles, the disciples and huge crowds used to accompany him as he journeyed to preach, teach, heal, forgive, feed and save.”

“In those tightly packed Middle Eastern crowds, some would just bump into him unchanged,” he explained, “but others would reach out to touch him with faith, like the woman with a hemorrhage for 12 years,” who was cured after touching the edge of Christ’s cloak.

“Others, like Zacchaeus, would climb trees to see him,” Father Landry added. “Others, hearing Christ was passing by, would cry out from the side of the road, ‘Jesus, Son of David, have mercy on me!'”