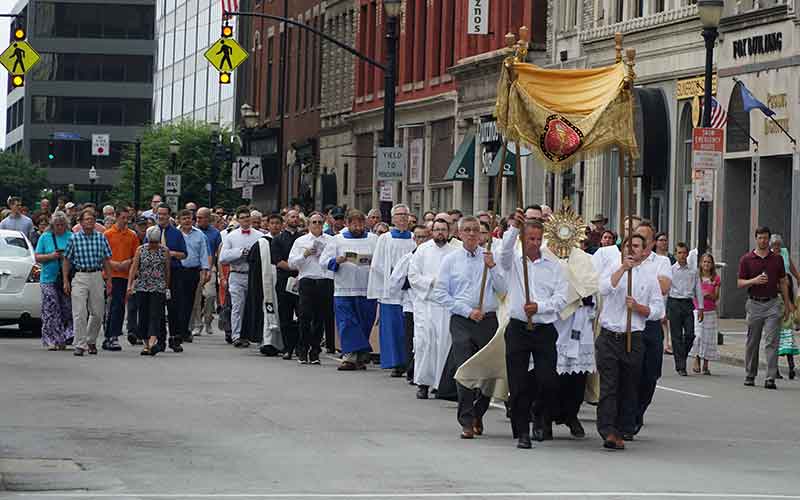 DETROIT (CNS) — Belief in the Real Presence in the Holy Eucharist is waning among professed Catholics, and the U.S. bishops are trying to do something about it.

According to a 2019 Pew Research Center study, roughly two-thirds of U.S. Catholics do not believe that the bread and wine at Mass become Christ’s body and blood during the consecration — a core dogma of the Catholic faith and the “source and summit” of the church’s life, according to the catechism.

In response, the U.S. Conference of Catholic Bishops is initiating a three-year grassroots revival of devotion and faith in the real presence of Jesus in the Eucharist, culminating in the first National Eucharistic Congress in the United States since 1975. The congress will take place in Indianapolis in 2024.

On June 19, the feast of Corpus Christi, the National Eucharistic Revival will be launched with eucharistic processions taking place in archdioceses and dioceses around the country.

In the Diocese of Rochester, Bishop Salvatore R. Matano will preside over a 10 a.m. liturgy at Corpus Christi Church, 864 E. Main St., before leading a eucharistic procession through the neighborhood around the church, which is part of St. Frances Xavier Cabrini Parish.

Other parishes in the diocese will have their own eucharistic procession. (See list of parishes below)

In the Detroit Archdiocese, Archbishop Allen H. Vigneron will lead a two-mile eucharistic procession from the Cathedral of the Most Blessed Sacrament to Sacred Heart Major Seminary.

Mercy Sister Esther Mary Nickel, director of worship for the archdiocese, said this “is an opportunity for Jesus to draw people to himself, and so we take Jesus to the streets, and we pray.”

Sister Nickel told Detroit Catholic, the archdiocesan news outlet, that she remembers participating in Corpus Christi processions in Rome with St. John Paul II, when onlookers would join as the congregation moved through the streets.

More than a month ahead of the archdiocesan procession, it was is drawing interest, she said.

“One of the (Detroit police) officers from the precinct who will help us with safety asked, ‘What is this about? What are we really doing?'” Sister Nickel said. “I responded and said, ‘It’s a pilgrimage, and we’re not here to stay. We’re on our way to heaven, and this is a symbolic representation of how we’re on our way to heaven together as we go to the streets.'”

Following these eucharistic processions, U.S. dioceses will develop parish teams of revival leaders to help their fellow Catholics reflect deeper on the centrality of the Eucharist in the life of the church.

In the Diocese of Nashville, Tennessee, for example, parish initiatives will begin immediately June 20, said Jenny Haug, assistant director of catechesis for the Office of Faith Formation.

The office, which is leading the revival initiative for the diocese, will be collaborating with parishes and the priests in the diocese to find a point person in each parish, she told the Tennessee Register, Nashville’s diocesan newspaper.

“The only prerequisite is that they have this beautiful devotion to Jesus in the Eucharist already and that they are willing to encourage those that they know within their parish that we need to do this together,” Haug explained.

“It is going to be three years diving deeper into the meaning of the Eucharist through catechesis, liturgical celebrations and prayer,” she added.

Catechetical resources will be made available throughout the diocese, said Brad Peper, director of the Office of Faith Formation.

In addition, there will be retreats for lay leaders and a catechetical conference each year “focusing on different consecutive themes regarding the real presence of Christ in the Eucharist — presence, sacrifice and communion/consummation,” he said.

Teaching of the Real Presence

There also will be collaboration with religious education directors and the Catholic schools to plan curriculum that focuses more on the teaching of the Real Presence.

“The Eucharist is at the very heart of our faith,” Archbishop Shelton J. Fabre of Louisville, Kentucky, told The Record, the archdiocesan newspaper. “It is the real presence of Jesus Christ, how the Lord strengthens us to do everything he has entrusted us to do.”

And we are called to share the Eucharist with others, he said. The Corpus Christi procession provides a literal way to do so. It will start at the Cathedral of the Assumption after a noon Mass and travel several blocks in downtown Louisville and return to the cathedral.

The U.S. bishops approved plans for the revival and the congress last November during their fall general assembly in Baltimore. Both are being spearheaded by the USCCB’s Committee on Evangelization and Catechesis, chaired by Bishop Andrew H. Cozzens of Crookston, Minnesota.

“We are really aware in these times that we live that the church needs to become more missionary. The culture itself doesn’t support what we do anymore as Catholics,” Bishop Cozzens said in a statement. “All Catholics are invited into a renewed encounter with Jesus Christ in the Eucharist, especially those Catholics who don’t fully understand the power of the Eucharist.”

As people are seeking deeper connection more than ever before, “this is a time not to be ashamed of the Gospel but to proclaim it from the rooftops,” he added.

Los Angeles Archbishop José H. Gomez, USCCB president, called the Eucharist “the gateway key to the civilization of love that we long to create.”

“Jesus promised that he would be truly present in the sacrament of the altar — but also in the flesh and blood of our neighbors, especially those who are poor and suffering,” he said. “If we ever hope to end human indifference and social injustice, then we need to revive this sacramental awareness.

“In every human person we meet — from the infant in the womb to our elderly parents drawing their dying breaths — we must see the image of the living God.”

Representing individual dioceses and religious orders, the priests are hoping to inspire people to become better aware of the Eucharist in daily life, said Father Jorge Torres, a priest of the Diocese of Orlando, Florida, who is working as a specialist for the revival at the bishops’ conference.

The preachers will begin to respond to invitations from dioceses to speak at clergy convocations, gatherings of diocesan and Catholic school leaders, diocesan holy hours and youth and young adult events to help build interest stronger connections with the Eucharist and build interest in the congress.

In about a year, Father Torres said, the priests will begin speaking at parishes and smaller gatherings.

“The preachers have been asked to enter into this role because of their love for the Eucharist, their ability to communicate, their schedule for allowing flexibility,” Father Torres told Catholic News Service in early May.

“The goal is to not only speak about the Eucharist but to eventually share the testimonies of who Jesus in the Eucharist is to me and how that affects me whether I am a pastor at a parish or a mom on the way to the soccer game,” he explained.

Patti is a news reporter on the staff of Detroit Catholic, the online news outlet of the Archdiocese of Detroit. Contributing to this story were Katie Peterson in Nashville and Marnie McCallister in Louisville.