Event aims to save babies in their first year - Catholic Courier 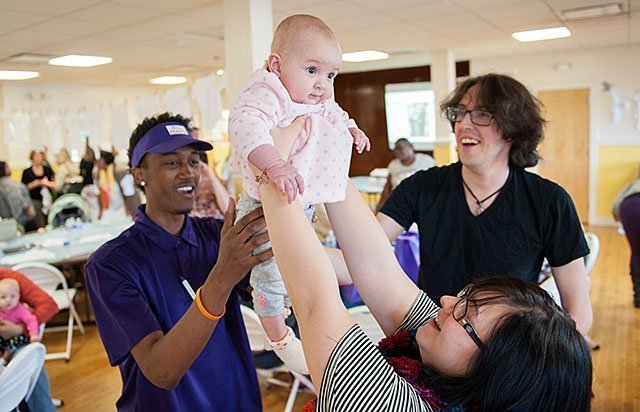 Ketrell Jackson (left) tells Chanielle Baker and her 2-year-old daughter Celeste Gibbs how they can be "Healthy Heroes" during a Sept. 27 event that highlighted local efforts to combat infant mortality.

When parent and child advocates in the Rochester area say "A Healthy Baby Begins with You," they aren’t just talking to moms or dads.

The slogan is intended to be a message to all community members that they are responsible for the health of their tiniest neighbors, said Patricia Brantingham, executive director of the Perinatal Network of Monroe County.

To raise awareness of the problems of infant mortality, the perinatal network held its annual "Day 366" party, which served as a celebration for all the babies in the community who lived to see their first birthday and as a chance to remember those who didn’t.

The many stories of individual babies were included on onesies decorated by clients of organizations that participate in the network.

From 2009 to 2011, 118 babies died in Monroe County before their first birthdays, or an average of one baby a week, according to statistics on the PNMC’s website, www.pnmc-hsr.org. In Rochester, 16.2 African-American babies died for every 1,000 live births as compared to 4.2 Caucasian babies.

"Infant mortality by any standard is a marker of a population’s health," Brantingham said.

Brantingham said communicating about infant mortality is an important step in stopping it from occurring. Yet she said families understandably may be reluctant to talk about the loss of an infant due to the natural grief or guilt associated with the loss.

"(An infant’s death is) a terrible, private tragedy, but since we don’t talk about it, we don’t have a focus on what we can do to prevent it," she said, noting that the event aims to shine a light on infant mortality. Exhibitors talked to families about proper nutrition, exercise and healthy living.

Michelle Weiler, a community nutrition educator with Cornell Cooperative Extension, showed attendees how to read a food label and how to make the healthy snack of Texas Caviar, which can be made from canned black beans and corn.

"A lot of people (who attended) don’t have a refrigerator, so we definitely want to make (the recipe) doable for them," Weiler said.

"It was the whole idea of getting people to try new things and telling them about the importance of fruits and vegetables," Bennett said of her presentation.

In addition to messages about healthy living, the perinatal network is trying to spread the word about safe sleep for infants, Brantingham said. An average of 10 to 13 infants a year die in Monroe County due to unsafe sleep practices, which include having blankets, bumpers or pillows in cribs and sharing a bed or napping with an infant in a chair or sofa.

Babies can roll over and be unable to roll back when airways are blocked. Parents and caregivers napping with babies also can unwittingly drop babies into positions where the babies cannot escape, or adults can roll onto babies and suffocate or crush them.

"Baby always needs to be put in a crib on his back with no pillows, no blankets, no bumpers during naptime, night time and every time," Brantingham said. "If every single family did that, we would save 10 to 13 babies every single year."

Brantingham said some adults protest that their families never followed safe sleep practices and they were not harmed as children. Yet she said parents are lulled into a false sense of security instead of realizing that they were very lucky.

"We need people to understand that (adverse instances) might be very rare, but when the consequence is the death of your baby, it’s not worth the risk," she said.